The Amazon effect is about to hit the health care industry
The company is poised to exacerbate a profit-driven consolidation spree that endangers community hospitals and local medical practitioners. 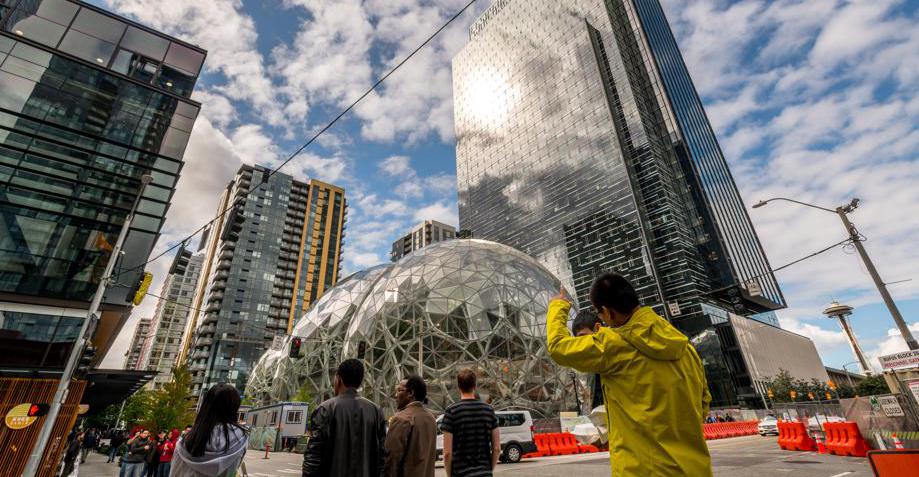 Amazon headquaters in Seattle. The company is poised to exacerbate a consolidation spree that challenges small medical providers.

NEXT IMAGE
By Brian Alexander

Amazon, the behemoth seller of everything, announced last month that it was going into the doctoring business. The company already provided primary medical services to many of its own employees, mainly via an online telehealth service called Amazon Care. Now, Amazon says, it will sell access to the service to other companies so they can offer it to their own workers.

It’s a preview of what our health care system could soon look like: a landscape of regional or national oligopolies in which doctors, local hospitals, labs, and pharmacies are owned by distant corporations. Many community hospitals might disappear or be severely diminished.

More and more, “seeing a doctor’’ will mean a Zoom call or FaceTime with a nurse practitioner or another alternate provider who makes less money than doctors do. Telehealth does have an important role to play in fostering and maintaining good health, especially for those living in rural and underserved communities — and, as we’ve seen, during a pandemic, when visiting doctors’ offices increases the risk of spreading disease. But the technology is ripe for overuse by massive and centralized businesses focused foremost on maximizing profit.

Amazon’s entry into medicine is a tell; it confirms the trend. Health care is an industry approaching $4 trillion per year, about 19 percent of GDP. If you bill yourself as “the everything store,’’ and if health care is the biggest slice of the financial pie, then competing for those dollars can seem like an imperative.

Amazon already tried to get into health care with Haven, a joint venture with Warren Buffett’s Berkshire Hathaway and J.P. Morgan. Based in Boston, Haven aimed to provide medical services to employees of the three companies — though its ultimate goals appear to have involved reforming American medical care more broadly. Haven disbanded earlier this year. But there’s still Amazon Pharmacy, an online drugstore, and Amazon Halo, a body monitoring device. And now that the COVID-19 pandemic has led to expanded use of telehealth, Amazon sees another way into the health care business.

Amazon and other employers that offer telehealth services to their employees have been updating an old idea. It used to be common for larger companies, especially factories, to have a small on-site clinic, mainly to treat work-related injuries and minor illnesses.

With the rise of employer-provided health insurance, many companies stopped paying for such clinics. But as the cost of corporate health insurance plans skyrocketed, some companies went back to offering primary care services to their workers, in hope of saving on health costs by addressing small medical problems before they became big ones.

For example, in little Bryan, Ohio, the Spangler Candy Company, makers of Dum Dum lollipops and Necco wafers, contracted in 2017 with an Indiana-based service called Activate Healthcare to provide basic primary care to its roughly 500 employees. The municipal government in this city of 8,500 followed Spangler’s lead by hiring Activate for its employees.

Spangler’s move at first worried Phil Ennen, then the CEO of Bryan’s community hospital, Community Health and Wellness Centers (CHWC). As is true in many small towns, CHWC is the largest employer in Bryan, in a region that was hard hit by the Great Recession and is still trying to recover. The hospital’s survival as an independent community asset depends upon local people using it.

So Ennen asked Spangler to informally agree that Activate would refer patients to CHWC, to help support the specialists he’d hired, instead of sending patients to specialists in distant cities. Lucky for Ennen, “Spangler really does care,’’ he told me. “They wanted to be community health partners.’’

However, as the workplace clinic trend has spread, it has attracted the private equity and venture capital investment firms that have been gobbling up (and sometimes creating) American medical companies and then combining them into bigger outfits. In 2018 alone, private equity firms made 715 health care deals worth nearly $104 billion, according to PitchBook. In the pandemic year of 2020, the pace slowed to 142 deals.

One recent round of consolidation swept up Activate, the company that served Spangler Candy and the City of Bryan. The company’s customers in Bryan recently got a flyer that said their new provider, Everside Health, would provide “convenient, low- or no-cost access to physicians and 24/7 virtual care, reducing the need for costly ER visits.’’ Everside describes itself as the second-largest direct primary care provider in the country, with 350 health clinics in 32 states, and it can use telehealth services to connect people to those clinics from far away.

It’s not yet clear exactly how this will affect the fortunes of Bryan’s hospital, but local primary care doctors — already a disappearing breed — are likely to suffer.

As Everside made clear to patients in Bryan, hospital chains also equate bigness with improved care. But economic analyses have shown that as medical providers muscle out the competition, quality either drops or remains the same. And as those empty storefronts in towns across the country testify, the “efficiency’’ and low prices of a company like Amazon can undercut community.

Now Amazon itself is casting its shadow over American medical care.

The company’s announcement that it is applying to sell telemedicine service is likely to drive even more frantic consolidation in health care. Such a scenario could be disastrous for general practitioners and family doctors, for small hospitals like CHWC, and for the wages and employment of American health care workers.

In “Private Equity’s Engagement With Health Care: Cause for Concern?’’ a report to the Institute for New Economic Thinking, researchers Eileen Applebaum and Rosemary Batt found that wages dropped at urgent care centers after acquisitions by private equity companies. They were 9 to 12 percent lower than hospital wages. More consolidation and Amazon’s relentless drive to suppress costs bode more of the same.

Of course, the consolidation in American health care wouldn’t be happening at all if the United States had a national health plan like Medicare for All. But Americans have been taught to mistrust government since Ronald Reagan. We’ve learned to fear “socialized’’ medicine.

Now, though, we may be faced with a choice: Trust our government or leave our medical care to consolidated systems and private equity financiers. And Amazon.

Brian Alexander is the author of “The Hospital: Life, Death, and Dollars in a Small American Town.’’ Follow him on Twitter @BrianRAlexander.