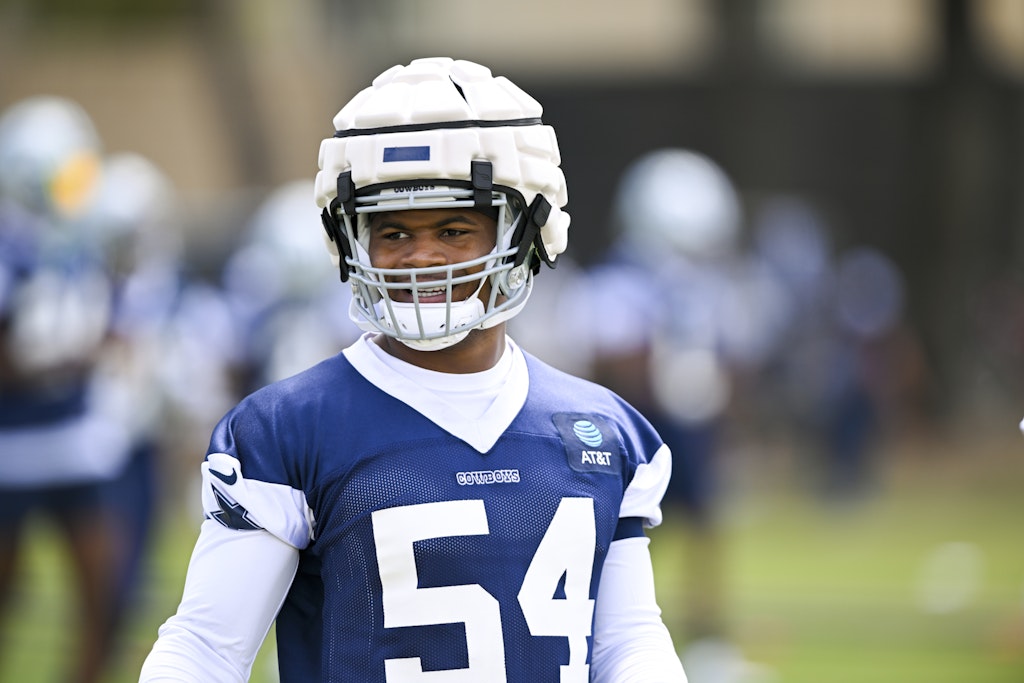 OXNARD, Calif. — Monday is the first day Cowboys’ players can wear pads. After four days in what the NFL calls a “ramp up period” where players work in helmets and jerseys, now real football starts.

The Cowboys’ second-round pick has displayed power and speed working mainly on the second team as a right defensive end in the early stages of training camp.

Micah Parsons, the Cowboys’ talented linebacker, describes what he’s seen in Williams in his own playful way.

When the Cowboys selected Williams in the second round it was to create more depth along a defensive front that’s always looking for more talent. When Randy Gregory departed for Denver in free agency, the Cowboys re-signed Dorance Armstrong as the other starting defensive end opposite DeMarcus Lawrence.

What they’re getting in Williams isn’t totally known until games begin, yet during the ramp-up period everyone was pleased with the efforts.

And that includes Williams himself, who’s not settling.

“When I came here, I just empty, we call it a tool box,” Williams said. “I just empty it basically. I don’t know anything, and I fill it up with the knowledge, with the stuff over the break [before training camp] that I learned from the [athletic] trainers, defensive specialist, DQ, and now it’s like my tool box is being filled. And in game time whichever tool I need I’m going to use it at the time.”

DQ is Cowboys defensive coordinator Dan Quinn, and Williams watched from afar what he did with Parsons last season.

All Parsons did was get named the NFL’s Defensive Rookie of the Year and take the league over for a stretch of the season. The Cowboys don’t expect Parsons to slow down, and Williams is hopeful he can emerge as a talented force in his rookie season in similar fashion.

“To be honest, I don’t look at anybody’s past record,” he said. “I try to be the best version of me. I’m going to be me. If I be me, I can go out and compete every day and everything else will handle itself. As long as the team wins, I win.”

In the offseason, Williams spent time with his son, Sam Jr., sending him to Frisco’s Lifetime Fitness daycare room as he lifted weights. Williams said he added some weight — he’s listed at 261 pounds — and basically stayed around the house.

He’s new to Texas, having grown up in Alabama and attended college at Ole Miss. Williams joked he doesn’t know anybody outside of his teammates.

Williams made a plea, jokingly, to the television cameras that he needed to find new friends.

If Williams produces on the field in 2022, something the Cowboys expect, he won’t have problems doing that. The biggest thing for Williams is getting into a rotation at edge rusher with Armstrong and continuing to push the pocket.

The Cowboys want to utilize a rotation of defensive linemen, with the possibility of keeping 10 total, with maybe six edge rushers.

Causing problems for quarterbacks is paramount to success for an edge rusher. It’s why Williams was considered an elite prospect coming out of Ole Miss this spring and why the Cowboys quickly snagged him in the second round.

“I put a few pounds on. Other than that I worked on my pass rush moves and critiqued certain areas I want to improve on,” Williams said. “No one is a perfect pass rusher, so there’s always room to work. But I’m always willing to learn something new and get better at my profession.”