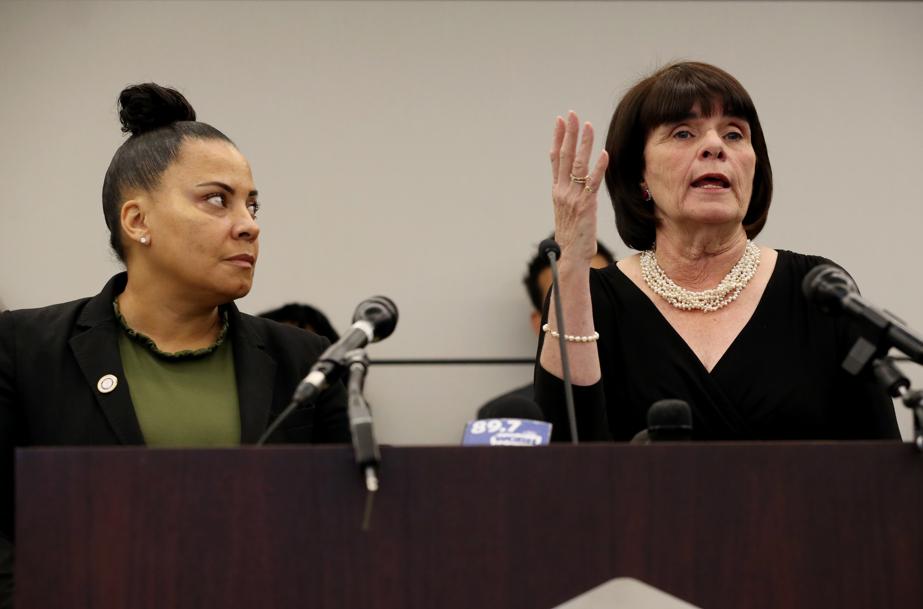 Two high-profile Massachusetts prosecutors joined public defenders and immigration advocates Monday in a lawsuit against the federal government to halt immigration agents from making civil arrests at state courthouses, an aggressive move that underscores the escalating tensions between federal and state officials over immigration enforcement.

Rollins and Ryan filed the lawsuit less than a week after a state court judge and a court officer were indicted for allegedly helping an undocumented immigrant facing drug and fugitive charges evade an ICE officer in Newton District Court.

“That case demonstrates the need for what we see here today,’’ Ryan said at a news conference, noting that the complaint filed Monday had been in the works for a year. She said the “fairness, impartiality, and civility’’ that have been hallmarks of the American court system have been threatened by ICE’s increased presence in courtrooms, where immigrants are being taken away in handcuffs before they have a chance to adjudicate their cases.

“This case represents the first time that the district attorneys and [public defenders] have joined as plaintiffs to challenge such a threat to the Massachusetts justice system,’’ according to the complaint, filed in US District Court in Boston.

It was unclear how much support the lawsuit had from the state’s other nine district attorneys. Ryan and Rollins represent liberal counties that are the state’s most populous and diverse.

Berkshire District Attorney Andrea Harrington, a former defense attorney who has called for criminal justice reform, said the lawsuit “will serve the interests of public safety and justice.’’

In a statement, she said she “joins prosecutors, public defenders, judges, and activists in calling on the federal government to stop its intimidating practice of sending ICE agents to state courthouses to target immigrants for arrest and deportation.’’

Cape and Islands District Attorney Michael O’Keefe, who has instructed his prosecutors to cooperate with ICE agents, said he was not asked to join Rollins and Ryan in the lawsuit and would not have if they had.

“The people that are here illegally are subject to deportation,’’ he said. “If you don’t like the law, then change it. But you can’t blame ICE for enforcing the law that is on the books.’’

A spokesman for ICE declined to comment, citing the pending litigation.

The complaint states that under President Trump, ICE has issued a directive to conduct civil arrests at courthouses in violation of the 10th Amendment, which limits federal power over states, and flouts a centuries-long position that a person going to court should not have to fear arrest on a civil matter.

In 2018, Ryan and immigration advocates petitioned the Supreme Judicial Court to ban ICE from patrolling state courts, but Justice Elspeth Cypherdenied the request, in part because she said a person arrested by ICE would have to challenge the detention in federal court even if the arrest happened in a state court.

In a statement, the Massachusetts Bar Association, a lawyers lobbying group, said Monday’s lawsuit “reflects the escalating tensions between state and federal law.’’

ICE’s strategy “is not only interfering with the proper administration of justice but also impeding the state’s interest in enforcing its rule of law and chilling access to justice for defendants, witnesses, and others,’’ said Martin Healy, the organization’s chief legal counsel and chief operating officer.

Governor Charlie Baker, who in 2017 unsuccessfully filed legislation that would have allowed, but not required, local police to detain immigrants at the request of federal officials, had a more muted reaction.

“ICE has a job to do,’’ he told reporters. “The reason we filed that legislation was we felt having a policy and procedure in statute . . . was a better answer than where we’ve ended up, which is this whole thing taking place inside courtrooms.’’

Rollins and Ryan initiated the case with the Committee for Public Counsel Services, the state agency that provides defense lawyers for low-income defendants, and the Chelsea Collaborative, a human services provider in Chelsea, where a large number of Mexican and Central American immigrants live.

Lawyers with the Boston law firm Goodwin Procter will represent the prosecutors for free, Ryan said.

According to the lawsuit, immigrants in Chelsea are so afraid of ICE they have refused to help authorities prosecute a pastor who embezzled $140,000 in church donations, challenge eviction notices by abusive landlords, or sue employers who garnish or deny wages in violation of federal laws. Domestic violence victims are avoiding courthouses rather than expose themselves to ICE, according to the lawsuit, which also accuses ICE officers of tackling immigrants in court, stalking immigrants throughout courthouses even when they have no detainer, and in one case trying to bully a court interpreter into revealing what an immigrant said to a defense lawyer.

“Immigrants are being hunted,’’ said Iván Espinoza-Madrigal, executive director of Lawyers for Civil Rights, which is representing the Chelsea Collaborative. “We are fighting back.’’

Ryan was careful to say that the lawsuit was not a response to the indictment of Newton District Court Judge Shelley M. Richmond Joseph, who has been charged with obstruction of justice for allegedly helping an undocumented immigrant elude an ICE agent in April 2018.

Court Officer Wesley MacGregor, who is now retired, was also charged with obstruction of justice for allegedly using his security card to sneak the defendant out the back door while the ICE agent waited in the courthouse lobby.

Both Joseph and MacGregor have pleaded not guilty. Joseph has been suspended without pay by the Massachusetts Supreme Judicial Court.

A GoFundMe site set up to pay her legal bills had raised nearly $37,000 as of Monday afternoon.

Rollins was asked at the news conference whether she feared arrest given that she has called on her prosecutors to inform her whenever ICE is present in a Suffolk courthouse.

“I am in no fear of an arrest,’’ Rollins said. “And very candidly, if I am it would be my honor to be because we need to stand up and be very, very bold about this ridiculous behavior that our president is engaging in right now.’’

Maria Cramer can be reached at mcramer@globe.com. Follow her on Twitter @globemcramer. Matt Stout of the Globe staff contributed to this report.