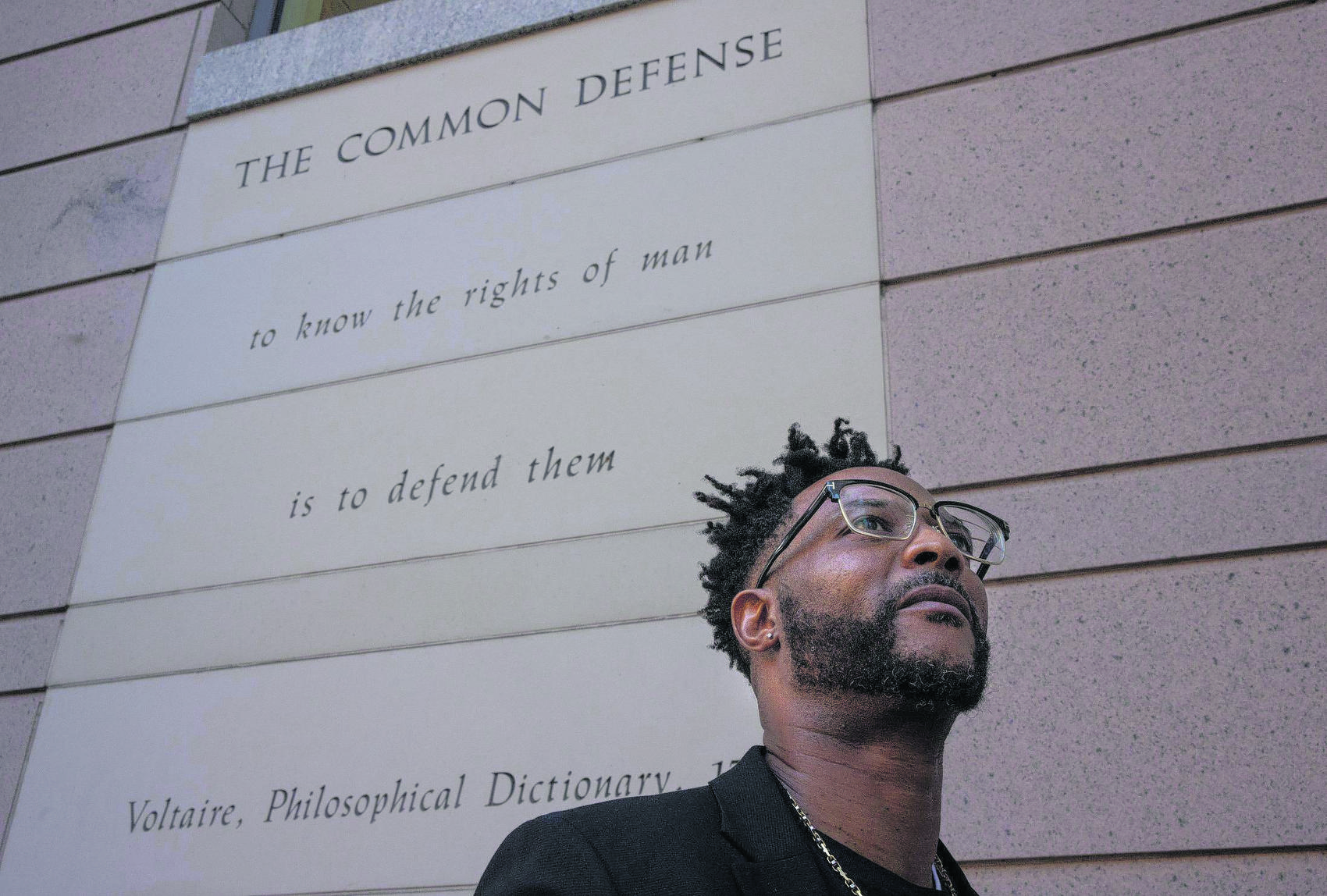 Kenny Robinson in front of the Mecklenburg County Courthouse in Charlotte on Thursday. Inside a courtroom in October, Robinson rallied supporters to help convince a judge that a young man charged with robbery deserved a second chance. 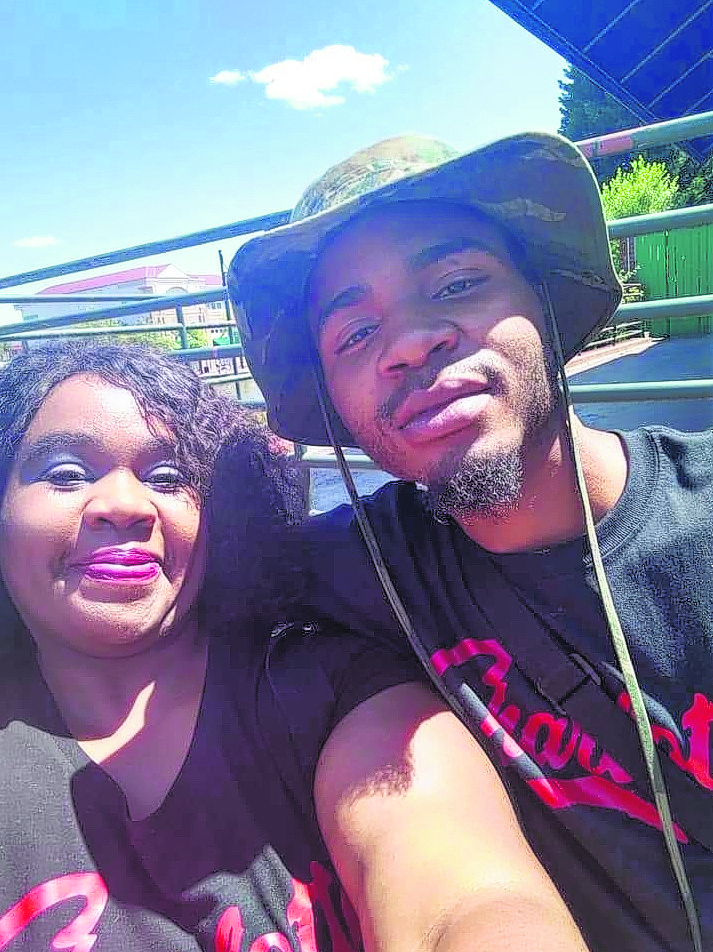 Javarrus Jeter’s mind was racing. He could barely believe what he’d just done.

A police report later would sum it up as armed robbery, the consequence for which could put the then-21-year-old in prison for up to four years. But his mother, a determined lawyer, a group of dedicated advocates — and eventually a judge — all agreed that sentence wouldn’t be justice served.

That night in front of a Charlotte gas station, Jeter didn’t make a calculated decision — he was just desperate.

“It was just crazy, just fast,” he said. “Like lightning.”

Inside, Jeter doesn’t deny he robbed the Circle K gas station. He had a gun but never fired it. He was looking for money after losing his health insurance that made affordable the medication he takes to stave off mental health crises.

But he left the gas station on the night of June 14, 2020, more desperate and in deeper trouble than he’d arrived.

Not knowing what to do next, he sat down on the curb and waited.

“There was no reason for me to run,” he said. “They were going to find me.”

The sirens wailing in the distance were getting louder.

More than a year later, in court, the details of what happened that night would be rehashed and examined, with Jeter’s fate hanging in the balance.

Latonya Littlejohn moved her family to Charlotte from Spartanburg, S.C., when Jeter was about 14 after one of Jeter’s siblings died.

The single mother got a new job in Charlotte, but still lived paycheck to paycheck providing for her family in the more expensive city.

“I relocated the family mainly just for change,” she said.

But Charlotte wasn’t quite the fresh start she imagined. Littlejohn’s mental health deteriorated, and she was diagnosed with depression and post-traumatic stress disorder.

Soon, she started seeing some of those same symptoms in her oldest son.

He started acting up in school in Charlotte and couldn’t focus on his work. At first, Littlejohn just thought it was growing pains.

But Littlejohn started finding him sitting in his dark closet with his eyes squeezed shut, like he was shielding himself from some invisible chaos around him.

“That’s when I knew he needed professional help,” she said.

Jeter was diagnosed with a host of disorders, including bipolar and PTSD. He started taking medication at 16.

“He started doing a lot better after he was on it,” she said. “Until the pandemic happened.”

Paranoia in the pandemic

Even before going to jail, Jeter felt confined.

Pre-pandemic, he participated in local youth programs in Charlotte. But March 2020 was the beginning of the COVID shutdown. With nowhere to go, he watched television.

By the summer, protests nationwide against police brutality dominated TV news: Images of riot cops unleashing rubber bullets and pepper spray on Black people marching in the streets of Charlotte and beyond.

“It was scary for folks who don’t have mental health problems,” he remembers. “How could I adapt to it?”

For Jeter, paranoia — a symptom typically controlled by his medication — started sneaking up on him again. He’d pace relentlessly back and forth.

He and his mother were shocked when they learned he’d been dropped from her health coverage plan. At 21, he wasn’t eligible under his mom’s Medicare insurance. It was nearly six months before they realized it. Littlejohn says she never got the notice that he’d be dropped.

At the pharmacy counter at CVS last spring, Littlejohn heard that without insurance help, just one of Jeter’s pills would cost hundreds of dollars — money the family didn’t have. They began the process of Jeter getting his own Medicare coverage but he needed medication immediately and enrollment could take months.

One night soon after, Littlejohn found herself waiting, alone in their home in north Charlotte.

Littlejohn feared the worst, so she Googled his name. It popped up under arrest reports.

‘A case I wanted to win’

At his arrest, Jeter was charged with multiple felonies, including robbery, attempted robbery with a dangerous weapon, and assault by pointing a firearm.

It was during his 44 days of incarceration at the Mecklenburg County Jail that he heard about Kenny Robinson and Jennifer Vollmer, somewhat known as guardian angels at the local jail.

Vollmer and Robinson run the Black People’s Community Justice Center and Freedom Fighting Missionaries, organizations dedicated to supporting formerly and currently incarcerated people and their families. Incarcerated people call their phones all day, and the lucky ones get through to one of them.

It’s rare they take cases like Jeter’s — his bail was set too high at $60,000, and their funding is small — but something about his case spoke to them, Robinson said, and they got him out.

Back at home, he applied for jobs and went to the Relatives, a local youth support organization, where he received therapy and learned about money management.

But his court date loomed.

Jeter’s court-appointed lawyer kept trying to convince him to take a plea bargain that would require some prison time. But Robinson, Vollmer and his mom disagreed. Robinson said the lawyer had trouble even remembering Jeter’s name.

“It was a big fight, right there in the courtroom,” Robinson said.

“We ended up firing her... we ain’t going to jail today,” Robinson said. “We paid for a new lawyer.”

With a reputation for taking on cases that others wouldn’t even attempt, Darlene Harris was the perfect replacement.

Jeter, she says, “was someone who just had been failed by the system all around — not just the criminal justice system, but our health care system, our school system. So many systems have just failed him and have given up on him.”

“And when I spoke with Javarrus, it was very clear that he wasn’t what some people would call a lost cause,” she said this month.

In October, Robinson’s phone buzzed with the text that Jeter had arrived at the courthouse, and he walked upstairs to greet him. As they entered the courtroom, Robinson watched Jeter’s reaction to an unexpected sight: Nearly 20 people were in attendance to support him.

“All of his supporters came that day,” Robinson said. “That made a difference.”

In fact, it laid the groundwork for Harris’s defense — extraordinary circumstances and community support. She stressed that Jeter had a community of people to lean on and vouch for his character.

Harris emphasized in her arguments that the robberies happened during a peak of an unprecedented pandemic and a racial revolution — all while a young Black man was off his medication.

“So many Black people were just struggling around that time with their own mental health and feeling of hopelessness and helplessness,” Harris said. “And then you add to that a young man.. we’re talking about basically a kid who is already struggling with mental health issues in the middle of a pandemic.”

She painted the story of Jeter and Littlejohn — a son and mother trying to do the right thing and stay on top of their mental health, all while being part of a community where there’s still a stigma associated with it.

“They were doing everything they could,” Harris said. “The one thing that really struck me was that it was scarier to him to not have control of his mind and go back to that mental state than to die.”

Harris also uncovered something that was counting against Jeter at trial: A previous conviction for a felony from when he was a teenager, which was still on his record at the time of his June 2020 arrest, had since been expunged with Robinson’s help. Harris brought to light that it had been cleared from his record — so his charges were able to be reduced.

“When you think about the circumstances that led him there, the fact that he was trying to pay for his medication... those types of things, that’s where I believe the criminal justice system fails. There’s no allowance for that to be truly considered, except for the argument that I made, which is extremely rarely rewarded,” Harris says.

“Everybody’s anxiety is high,” he recalled. “We have only this last ditch effort.”

The judge read his final verdict, and everyone in the room exhaled: Two years probation.

Most of Jeter’s charges were dismissed but even with a guilty verdict on one felony, the judge decided he should face his consequence at home under supervision, not in prison.

Jeter sat still, in sheer shock, at a small table near the front of the courtroom, Harris at his side.

“We had been getting his mind ready to go to prison,” Robinson said. “So at first, he couldn’t fully understand.”

Behind him, tears rushed down his mother’s face.

“We were all crying,” Robinson said. “I was crying myself when the judge gave him the probation. That’s how extraordinary that is, how rare.”

But even in victory, Jeter has still yet another battle ahead — another court date, this one for December. Robinson says he hopes a judge will again see beyond the police report from that night.

This summer, while walking to work, Jeter popped up on police radar.

Someone had broken into a home nearby, Robinson says, and police were looking for the offender. Awaiting trial on the gas station robberies and out of jail on bond, Jeter was wearing an ankle monitor, which gives real-time electronic information to police on his location.

Later that day, someone knocked at Littlejohn’s door.

The police were looking for her son. He was home, in his room, but Littlejohn demanded to know why officers wanted to see him. They explained that his ankle monitor had been picked up at an address near a recent burglary.

Littlejohn felt emotionally drained — it seemed that Jeter would never be free from the legal system.

“It was very hurtful, what kept happening,” she said.

Robinson says Jeter has a lawyer helping him fight the charge — that Jeter was accused due to proximity but did not break into the house.

“They picked him up just because he was Black coming through the area with an ankle bracelet,” Robinson said. “Unfortunately, it’s common.”

His court date, which has been pushed back several times, is in December.

For Littlejohn, their win in October has given her a second wind. She’s ready to fight for son again.

Harris still lights up, thinking about how Jeter’s sentenced was reduced to only probation.

“It was the best day of my career… I saw before how nervous and scared [Littlejohn] was,” Harris remembered. “But after, you could see all that release from her. It was probably the purest form of joy I’ve seen in a long time.”

But Harris is nervous it’s going to be a long time before she sees that joy again.

“That’s the disheartening part,” she said. “I’m honestly not sure how much of a precedent it will set… My biggest concern with Javarrus and with anybody that struggles with mental health is that going into jail is never going to help anyone’s mental health, ever.

She says that Jeter was one of the lucky ones.