No toilet paper? Just roll with it 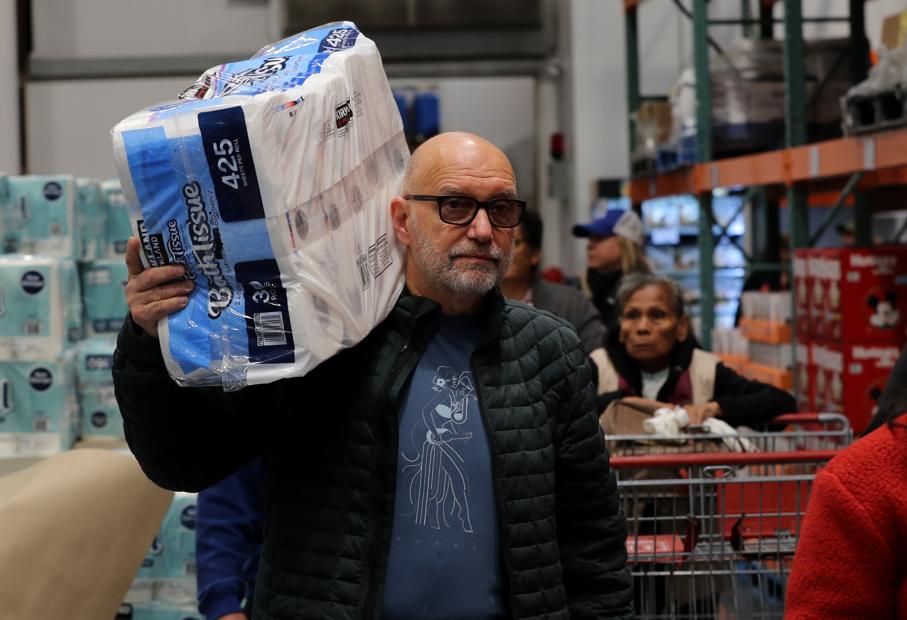 Before toilet paper was a common household item, all sorts of items were used, from corncobs to pages of literature.

In olden times, sailors used the frayed end of a rope dipped in saltwater.

It was ‘‘Gayetty’s Medicated Paper.’’ Made of hemp, it had the inventor’s name proudly watermarked on each sheet.

Now the novel coronavirus and consumer panic buying have made Gayetty’s creation scarce, and prompted a look back at the history of toilet paper and its predecessors.

To start with, Gayetty’s product was a luxury. A dollar — about $30 today — got you 1,000 sheets, according to newspaper ads of the time.

It wasn’t yet on a roll.

But ‘‘all persons who neglect to make systematic use of [it] for the Water Closet are doing themselves injustice.’’

Four medicines blended with the paper pulp ‘‘render it a sure cure and preventive of piles,’’ the ads stated.

‘‘All other paper is poisonous,’’ Gayetty asserted. Paper bearing printed material was especially bad. ‘‘Printer’s ink is a rank poison . . . [and] persistent use of printed paper’’ would eventually lead to piles, a.k.a. hemorrhoids, he claimed.

It was a breakthrough.

But research and advances didn’t stop.

In 1890, Irvin and Clarence Scott, of Philadelphia’s Scott Paper Co., revolutionized toilet paper when they began marketing it on rolls. It wasn’t a new idea, but the subject was delicate and hadn’t been pushed. (Mention of toilet paper rolls in ads goes back at least to 1886.)

On April 9, 1889, Oliver Hewlett Hicks, of Chicago, received a patent for a new kind of roll.

Normally, he pointed out in his application, when the desired number of sheets are pulled off the roll, it can often be hard to locate the following sheet next time around if it is not hanging down.

Hicks suggested a two-ply role with uneven layers of sheets to make the end easier to find.

(A later inventor attacked the same problem by proposing a ‘‘roll’’ shaped like a kidney bean. Neither invention panned out, and the problem persists.)

On Sept. 15, 1891, according to the US Patent and Trademark Office in Washington, Seth Wheeler, of Albany, N.Y., received Patent No. 459,516, which was designed to ensure that only one sheet of paper came off the roll at a time.

‘‘Since the advent of rolls of paper for the above-named uses, many devices designed to prevent waste have been patented,’’ Wheeler wrote in his patent application. ‘‘All these devices have been more or less complicated, liable to derangement, and expensive to . . . manufacture.’’

His perforation design would help prevent the unwanted and wasteful unraveling of too many sheets.

Another welcome development was the creation of “splinter-free toilet paper.’’

In the early 1900s, Wisconsin’s Northern Paper Mills reportedly boasted of its super-refined toilet paper, which was free of minute wood pulp splinters left over from the papermaking process.

Not so the products of the distant past.

The Romans used a sponge on the end of a stick, according to British writer Richard Smyth’s history of toilet paper.

The use of corncobs is apparently no myth. In an old poem attributed to the writer James Whitcomb Riley about the demise of the outhouse, the author recalls the discomfort of using one in winter:

The torture of the icy seat would make a Spartan sob

For needs must scrape the goose-flesh with a lacerating cob

That from a frost-encrusted nail hung pendant by a string.

My father was a frugal man and wasted not a thing.

When it came to paper, anything handy might be used, including pages of literature. Smyth quotes a verse from an anonymous author:

There was a young fellow named Chivy

Who, whenever he went to the privy,

First solaced his mind, then wiped his behind

With some well chosen pages of Livy.

And Gayetty, the inventor, wasn’t the last to have toilet paper bear his imprint.

Numerous American politicians have appeared on rolls, including President Trump.

And prior to World War II, some British toilet paper was made with images of Adolf Hitler and other Nazi leaders on the sheets.

One such roll went up for auction last year, according to the BBC. The roll had been found in a barn, and dated to the late 1930s, just before the war started.

‘‘It’s rather thin war-issue paper and wouldn’t stand up to much,’’ said Thomas Jenner-Fust of Chorley’s Auctioneers, the BBC reported.

It was only 20 sheets — one depicted Hitler giving his Nazi salute — but sold for about $240.

‘‘That has to be a world record for toilet paper,’’ Jenner-Fust said.

‘‘You could say we were flushed with success.’’