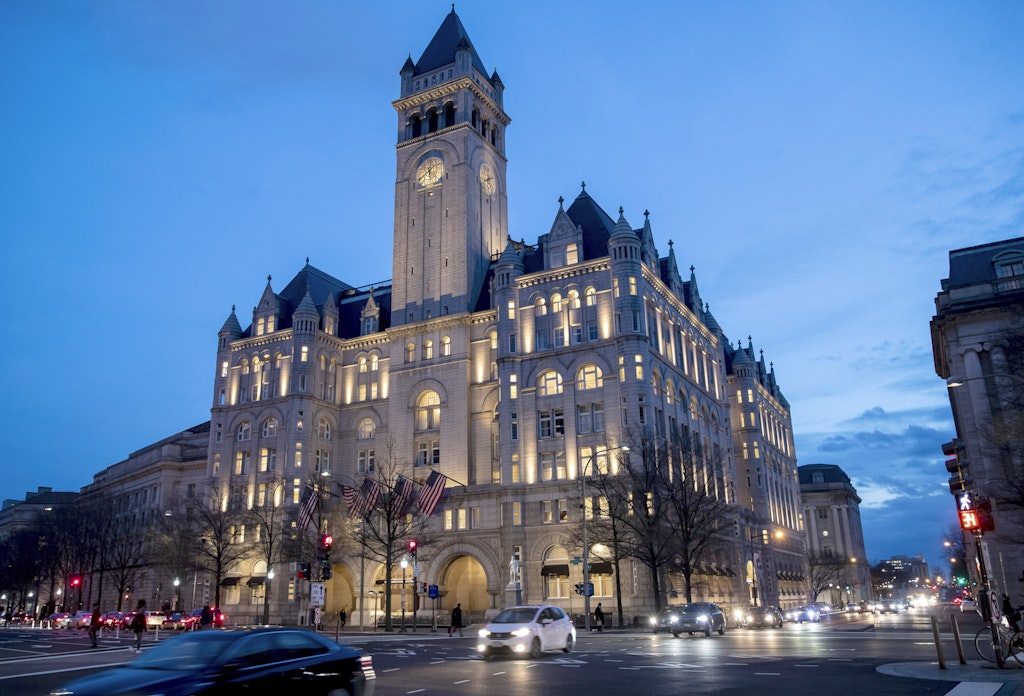 The Trump International Hotel is thriving as a see-and-be-seen center for Republican social activity in the nation’s capital. (Alex Brandon/The Associated Press)

Profit from foreign sources rises
Eric Trump says the $191,538 was offset by a check to the Treasury
By SHAHIEN NASIRIPOUR
Bloomberg News

Spending by foreign dignitaries, embassies and other government representatives produced $191,538 in net income for President Donald Trump’s family business, according to Eric Trump, his son and company executive vice president. The Trump Organization donated an equivalent amount to the U.S. Treasury on Feb. 22 by writing a check signed by Eric Trump and his older brother, Donald Trump Jr.

“This voluntary donation fulfills our pledge to donate profits from foreign government patronage at our hotels and similar businesses during our father’s term in office,” Eric Trump said Monday in a statement.

The president placed his business holdings in a revocable trust that allows him to continue to profit from his company’s activities. His sons Eric and Donald Jr. run the Trump Organization. Democrats and watchdog groups have repeatedly criticized Trump for maintaining his business while in public office.

Not all of the Trump Organization’s ventures have thrived during Donald Trump’s divisive presidency. The company announced this month that it was abandoning plans to start two new domestic hotel chains, blaming controversy over the president. “We live in a climate where everything will be used against us, whether by the fake news or by Democrats who are only interested in Presidential harassment and wasting everyone’s time,” Eric Trump said in a statement at the time.

By contrast, the company’s hotel in Washington, just a short walk up Pennsylvania Avenue from the White House, is thriving as a see-and-be-seen center for Republican social activity in the nation’s capital.

Embassies for foreign governments have held receptions at the Trump International Hotel, and lobbyists representing Saudi Arabia have spent hundreds of thousands of dollars there.

His father is fighting lawsuits alleging that he’s violating the Constitution by accepting payments from foreign states and state governments in the U.S. The emoluments clauses forbid a president from profit off the White House in an effort to prevent the corruption of policymaking. Justice Department lawyers have said Trump isn’t violating the Constitution, in part because the Trump Organization donates the profits.

Oral arguments in one such case, initiated by the state attorneys general of Maryland and Washington, are due to be heard next month by the federal appeals court in Richmond, Va.