Plan to march like democracydepends on it
Make a plan to vote — and a plan to take to the streets if necessary. It can make a difference. 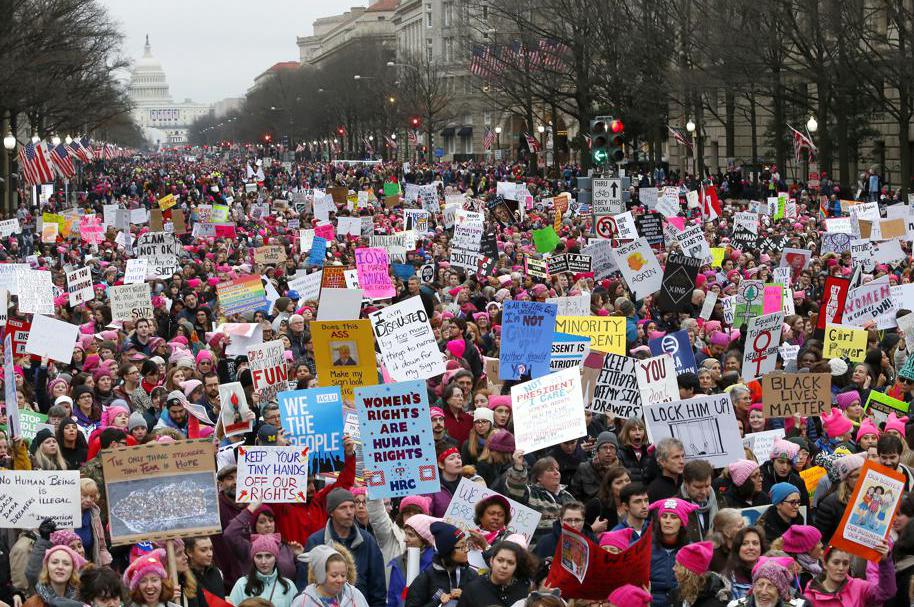 President Trump’s time in office began with the massive Women’s March on Washington. Ending it might require more protests.

NEXT IMAGE
By Robert Blair and Steven Rosenzweig

We’ve seen this movie before.

Together with dozens of other scholars of democracy and autocracy, we study and teach about how democracies die. We have followed recent developments in the United States with increasing alarm as we see sign after sign that our own democracy is at risk.

We must not lull ourselves into the happy fiction that American democracy is invincible. It is not. It is eroding before our eyes, and we must act now to prevent it from collapsing.

Democratic erosion (or “backsliding’’) is a process through which elected leaders use existing laws and institutions to undemocratic ends. They strategically manipulate elections by restricting the media, changing electoral rules to disadvantage the opposition, exploiting government resources for the incumbent’s benefit, and harassing rival candidates and their supporters. Most of these actions are piecemeal; many are ostensibly legal. This is precisely what makes democratic erosion so insidious, so difficult to detect until it’s too late.

In the United States, the signs of democratic erosion are now impossible to ignore. Both Democrats and Republicans have at times taken actions that erode our democratic norms and institutions. But there’s no greater threat to American democracy today than Donald Trump and his enablers in the Republican Party.

Republican officials have actively suppressed turnout among likely supporters of the opposition by eliminating voting locations and purging voter rolls, while the president has employed government resources for his campaign and encouraged rather than condemned violent extremists who hope to keep him in office. Trump has aggressively undermined the legitimacy of the election with dubious claims about widespread voter fraud, and he has repeatedly refused to commit to peacefully relinquishing power in the face of electoral defeat — his most fundamental and dangerous violation of democracy yet.

We’re often told that we should make a plan to vote. This is good advice, and we should work hard to defeat aspiring authoritarians at the polls. But we should also make a plan to protest. Citizens and civil society organizations must be prepared to organize and engage in disciplined, nonviolent mass action should the president and his allies manipulate the election or refuse to accept defeat.

If the president is willing to disregard the will of the majority of voters, what good would protesting do? In situations like this, supporters of the incumbent are often divided between what political scientists call “hard-liners’’ and “soft-liners.’’ Hard-liners will back the incumbent no matter what. But soft-liners can be convinced to compromise with the opposition, or to abandon the regime altogether. Protests can provoke a split between these groups, peeling away government officials who might otherwise back the incumbent’s refusal to cede power. We’ve seen these dynamics at work in the Philippines in 1986, Ukraine in 2004, Tunisia in 2011, and other countries around the world.

Barring an indisputable landslide on election night, Trump appears likely to contest the results. He will claim rampant voter fraud. He will demand that the courts and the Justice Department intercede on his behalf. And he will wink and nod at the armed extremists currently occupying the fringe of his base. Some of his Republican enablers — the hard-liners — will cheer him on. But if enough citizens mobilize to demand that their votes be counted, soft-liners may start to see the writing on the wall and come to believe that the costs of rejecting the outcome of the election are greater than the benefits of clinging to power. If their loyalties shift, Trump’s attacks on the democratic process will become harder and harder to sustain.

Protests can serve other purposes as well. They can convey popular opinion to the courts and other institutions, potentially swaying judicial decisions. They can also generate broader sympathy for the movement, especially when conducted peacefully. Holding firm to a strategy of nonviolence in the face of threats or attacks is an extraordinary challenge, but it may be key to a movement’s success. The Selma-to-Montgomery march in 1965, for example, is widely credited with finally pushing President Lyndon Johnson and Congress to pass the Voting Rights Act. In that case, Martin Luther King Jr. and his associates knew that a violent response to their peaceful protest was likely. But they also knew that brutality might induce sympathy from white moderates, whom King had identified as the primary obstacle to the movement’s goals. They were right.

To be clear, we hope to see an election in which all Americans can cast their votes free of intimidation, all votes are counted, and the loser accepts the results. But hope is not a plan. Find out which organizations are likely to help mobilize protests in your area. Ensure that they’re committed to nonviolence. Get on their mailing lists, follow them on social media, and attend their meetings, if you can. Then make a plan to peacefully protest, if necessary — just like you make a plan to vote. We simply cannot rely on our increasingly fragile institutions to preserve our democracy. We must prepare to do it ourselves.