Back Porch Carousel aims to capture that band-in-a-bar vibe, complete with after-show hangs 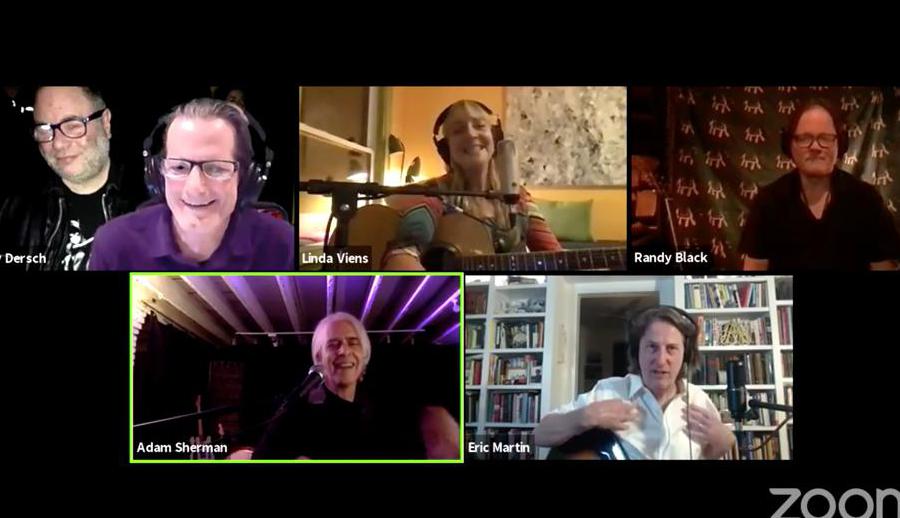 The 90-minute Back Porch Carousel shows are free to the viewer, but structured as fund-raisers.

As COVID hit Boston in March, a small clutch of rock musician friends became aware that their whole way of life had abruptly gone extinct: gigs, rehearsals, even the hang — the after-show gabbing at favorite bars — all fell victim to the virus.

“I so missed going to bars like the Plough and Stars [in Cambridge] to see all my friends play,’’ explained drummer Larry Dersch. “So I suggested we hang out on Zoom.’’

The friends were all veterans of the Boston rock scene of the ’80s and ’90s: Randy Black, Linda Viens, Adam Sherman, Sarah Levecque, and Peter Zarkadas.

“The plan was to have a few cocktails and commiserate,’’ Dersch said. Yet grieving for what was lost didn’t take up much of this group’s time. In their second Zoom session, singer-songwriter Black (best known for his ’80s post-punk band Limbo Race) suggested playing songs for each other. By their third meet-up they were planning a series of streaming shows on Facebook Live. Black came up with a name for the monthly project: Back Porch Carousel.

“We’re revolving songwriters, each taking turns in-the-round, with guitars instead of calliopes,’’ he explained.

The 90-minute shows are free to the viewer, but structured as fund-raisers. Initially, they helped the cash-strapped, unemployed staffs of several music venues; after unemployment checks began arriving for the bartenders and waitresses, the Carousel turned its charitable attentions to mostly local nonprofits. The next show, on Dec. 13, benefits On the Rise, a Cambridge organization helping the homeless. The Carousel crew collects the donations via PayPal and Venmo, and thanks each donor individually.

Dersch is known for his percussive work with Roger Miller, Dana Colley, and the late Mark Sandman. Since Zoom doesn’t provide the precise synchronization needed for musicians to play together from separate locations, Dersch hosts the Carousel but doesn’t drum.

“I tend to be introverted,’’ he said. “But in the livestream, it’s my job to drive the conversation, and I have no problem with it.’’

Dersch does the job adroitly. The Back Porch Carousel narrowcasts, which feature a guest artist at each show, evince a conviviality that is a natural product of the group’s multi-decade friendships. Yet the spirit isn’t clubby.

Behind-the-scene work is old hat to Dersch, whose day-job (now on hold) is master carpenter with the Huntington Theatre Company. On the Carousel, Dersch taps the toggles of the balky, idiosyncratic Zoom and Facebook Live mechanisms, pushing the technology toward a musical role for which is was never intended. Unlike the majority of livestreams, the sound is solid. Dersch handles the soundchecks, and each Carousel member and guest has added an interface gadget and a decent mic to their computer set-up. (Sherman, a voice teacher and former singer of the ’80s band Private Lightning, sounded especially sensational at last month’s show.)

The Carousel gang knows that livestreaming will never equal the nightclub experience. “Performing through a digital interface, alone in one’s home, can’t capture the primal intimacy of playing with other musicians,’’ said Viens, known for such projects as Boston Rock Opera and the current Angeline. “But Zoom is a way to connect, to give and receive love.’’

Following a Carousel show, viewers can reconnect with Zoom and hang with the musicians. “We call it ‘the after party.’ It’s like hanging out at the bar,’’ Dersch enthused. “People want to get together so frigging much right now. Anything we can do to provide human contact might help keep people sane. Until we can go back to the bars, these substitutes do help. I just love the hang.’’