A ‘Jewel’ revived
Nearly a victim of the maritime scrap heap, old Kittery lifesaving station has a fresh wind at its back

The Wood Island Life Saving Station is one of a string of emergency outposts that were the precursor to the modern Coast Guard. 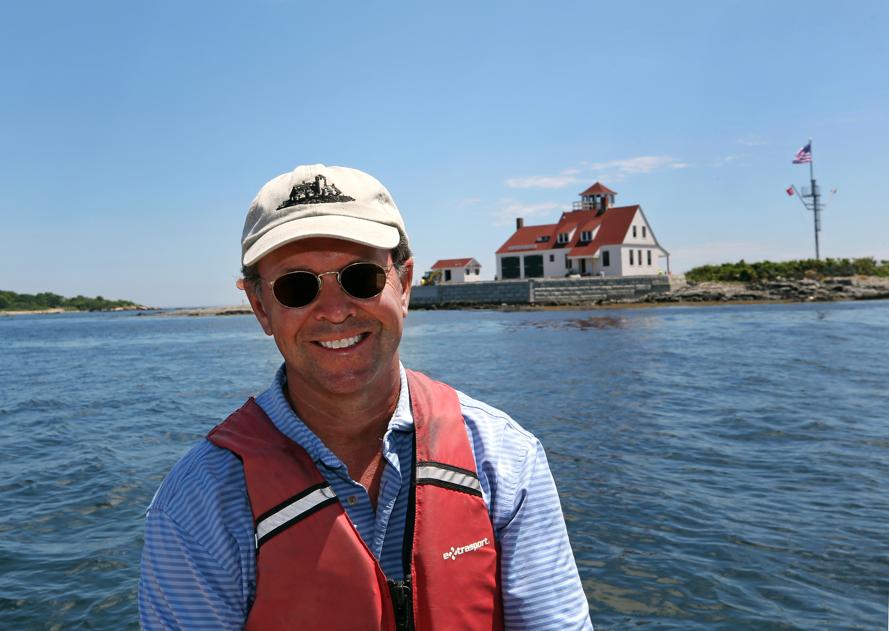 “At its core, this was a very special place because brave men were risking their lives to save others,’’ said Sam Reid, who took in the view from the top of the station. 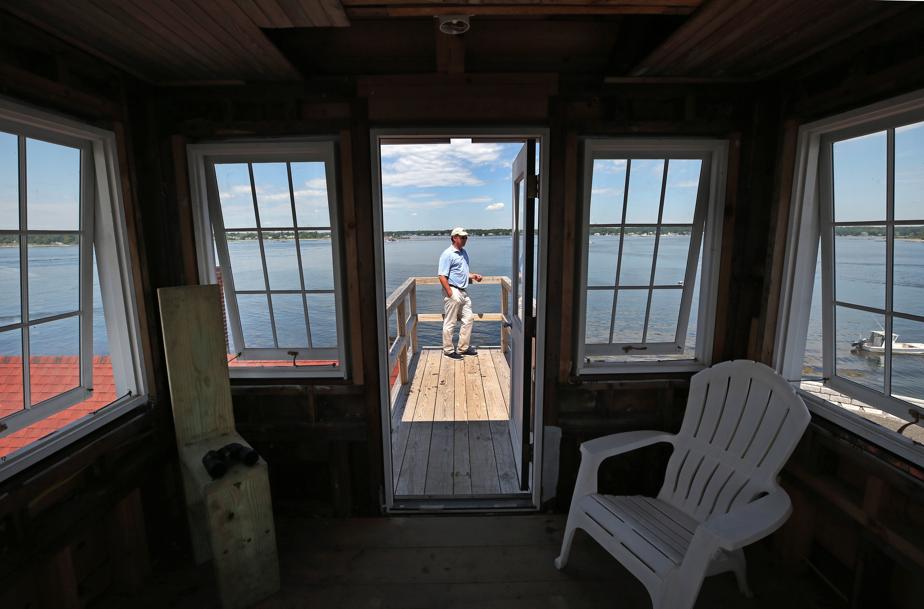 The Kittery Town Council voted to allow the Wood Island Life Saving Station to be restored and opened to the public. 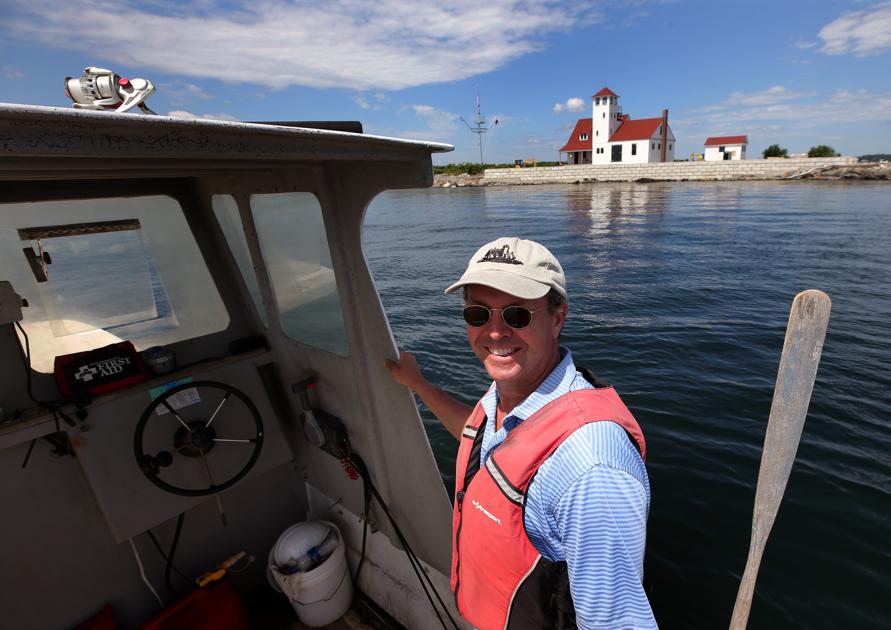 KITTERY, Maine – It sits at the mouth of a gleaming river, a 111-year-old sentinel that silently testifies to feats of derring-do, of the reflexive courage of brave men in small boats who rowed into the teeth of monster storms to save hundreds, forever securing their place in Maine’s storied maritime history.

It’s difficult to believe now, as their old home a mile offshore gleams anew, how close this well-worn place in the Piscataqua River came to collapsing into itself, an overgrown, weed-tangled place of rotting timbers, decayed floorboards, and thick bird guano.

The Wood Island Life Saving Station very nearly forever disappeared into a fog of political inertia, swallowed by financial distress and imperiled by the collective shrug of municipal shoulders.

And then something remarkable happened. A station devoted to saving lives, once targeted for the scrap heap, was itself thrown a lifeline.

“It’s the jewel of the harbor,’’ Ken Lemonttold me, standing on a pier in fluorescent-orange waders that is the uniform of his work as a lobsterman, and pointing a mile offshore to Wood Island.

He’s a member of the Kittery Town Council, and he knows how close the lifesaving station — one of a string of such emergency outposts that were the precursor to the modern Coast Guard — was to forever passing into the local history books.

He was on the winning side of a 4-3 Town Council vote in 2016 that allowed the island to be restored and opened to the public. “It’s the jewel of the harbor,’’ Lemont said, squinting into a brilliant early-summer sun as the red-white-and-blue holiday approached. “It’s what every boat passes on the way in and out. It’s what we are. It’s what Kittery is. Once you’ve lost that, it’s gone forever.’’

Few people have an appreciation for how close that came to happening or what was hanging in the balance than Sam Reid, who led the against-all-odds charge to save the place he can see from his bedroom window on Kittery Point.

“The town starts talking about demolition, and that is infuriating,’’ said Reid, 55, a Boston native who was a policy adviser to a string of Rhode Island governors before a career as a consultant and lobbyist where he honed the art of finding the proper and productive levers of government.

“I know perfectly well it’s a very rare historic building,’’ he said. “I know perfectly well it can be restored. It’s just basically in the wrong hands. The town would have had to invest millions to restore it. It had never been opened to the public. So there’s no constituency. And, by the way: What are you going to do once you restore it? There’s not an easy answer to any of those questions.’’

So Reid and other Wood Island advocates went to work to assemble answers. And allies.

History was on their side, and that history was enshrined in more than 50 boxes stored at the National Archives outside Washington and at a regional archives office in Waltham. They examined them all.

The records made the Wood Island rescuers come alive. There were names and hometowns of those men in boats. There were rich, dramatic rescue reports. There were shipwreck tallies and computed values of the vessels saved.

“This was a period of time in the nation’s history when there were very horrible shipwrecks and people dying from poorly built and maintained ships,’’ said Tim Dring, a rescue craft specialist. “These buildings were rescue stations for these people who otherwise would have no hope.’’

From 1918 to 1939, 1,678 passengers and crew members were assisted by the men who pushed their small boats from the Wood Island station. The value of ships assisted during that period was placed at more than $1.5 million.

“Those are the roots of the Coast Guard,’’ said Coast Guard Lieutenant Adam Schmid. “We have a proud tradition and history of search and rescue, and the roots really come from these lifesaving stations.’’

In other words, this place was well worth fighting for.

“It’s the icon of Portsmouth Harbor,’’ said David Kaselauskas, a lobsterman and a board member of the group that worked to save Wood Island. “Any postcard you see, it’s going to have Wood Island as the focal point. Without it, this place would be incomplete.’’

As workers wrapped up another day of restoring the old lifesaving station, Reid led a tour of the place like a proud father pointing out the fine features of a newborn baby still learning to smile.

The old surfmen’s lockers are still here, awaiting a coat of lacquer to further preserve them. There’s a 5,000-gallon cistern in the basement to supply fresh water. Trenches are being cut for utilities. Old Glory flies from the flagpole once again, gently flapping in the early-summer breeze.

New sea walls are handsome and sturdy. Some $3.4 million of the $4 million needed for the project is in hand from a combination of state and federal funds and private donations. “We were able to receive $200,000 from the state of Maine,’’ Reid said. “The governor vetoed the funding. It was overridden. Nothing’s easy with this project.’’

He can envision docents leading tours, telling tales about the men who were on watch over a harbor they called home and about the men and women whose lives they saved.

He can picture new brides dancing under a starry eastern sky as a small band’s music drifts over Pepperrell Cove.

“The whole point is to maintain the historic building,’’ said Reid, who climbed over this island as a boy and has returned as one of its rescuers.

“At its core, this was a very special place because brave men were risking their lives to save others,’’ he told me. “And it’s not just lip service or loose talk. To get in a rowboat in a winter storm at night has to take some sort of incredible bravery. And they weren’t well compensated. It was practically volunteer service.’’

He hopes the project is finished by the end of next summer. His group is in touch with collectors who might help stock the island’s museum with artifacts from its lifesaving past.

“The story of the surfmen was almost all lost,’’ he said, using the term for the rescuers who once lived and worked on the island’s 1.25 acres. “People do not know the story I’m telling you. And this building was almost lost. That story and the ability to tell it again were right on the edge of destruction.’’

As the afternoon sun slips lower in the sky, Reid walked to the newly installed flagpole and lowered the Stars and Stripes, folding it into a crisp triangle and storing it inside. Before we shoved off for the mainland, he flashed a satisfied smile.

“Things that are impossible are not impossible,’’ he told me. “Talking to people gets things done. The discouragement with the town was very serious and real, but the clarity of sitting here today was also very real.

“We won. The good guys have won. Nothing’s impossible.’’

And then Sam Reid stepped off Wood Island for the evening and crossed Pepperrell Cove to the home where the once-abandoned lifesaving station will soon again be visible, just offshore, its lights burning brightly against the gathering dusk of Maine’s coast.

Thomas Farragher is a Globe columnist. He can be reached at thomas.farragher@globe.com.