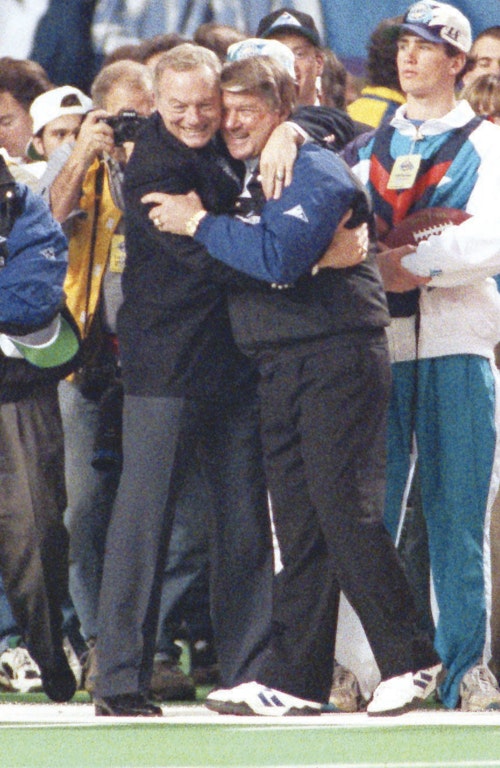 OXNARD, Calif. — Jimmy Johnson opted for the high road about 14 hours after his former employer, Cowboys owner Jerry Jones, had traveled the low road in the story that will not die, the never-ending discussion on when a two-time Super Bowl champion coach will be deemed worthy of the Cowboys’ Ring of Honor.

“It’s BS for anybody to make anything of this,’’ Jones told Channel 5’s Newy Scruggs on Sunday night. “I’ve said I’m gonna put him in. Now when I put him in, and the circumstances around when I’m going to do that, there’s a lot more than Jimmy to think about. It isn’t at the end of the day tailored around whether Jimmy is sniveling or not.’’

It was a strange comment for a man who was contrite at this time last year about his handling of Johnson’s dismissal. Also no one seems to be aware of Johnson even weighing in on the subject lately, much less sniveling. Heck, the man who retired to the Florida Keys last century barely likes to travel anywhere because it necessitates putting on shoes.

(In all honesty, he travels across the country on his private plane when forced to show up at Fox’s LA studios, so I don’t know for sure that he dons shoes for the trip. But I do know he hates it.)

Johnson was attending a seminar, so maybe he just didn’t have time to bounce back with one of his quotes he gave me in the recent past, such as: “They’re always celebrating anniversaries [in Dallas], I guess because they don’t go to Super Bowls anymore.”

Theirs is a stormy relationship, and it has been that way for 30 years. I first began to gain a sense of Johnson’s distaste for the owner during the 1992 season when the franchise was about to win back-to-back Super Bowls for the only time in its history. Johnson and I would meet for a few beers after taping his coach’s show downtown, and while the talk was frequently about anything but sports he would also wander off into his frustration with how the owner treated other employees or sought to change the terms of a contract that gave Johnson authority over the club’s roster.

And everyone knows the rest of the story.

At this stage, it’s more than simply pettiness on Jones’ part that keeps Johnson out of the Ring. With each passing season and failed attempt to return to a Super Bowl or at least make an NFC Championship Game appearance (26 years and counting), it becomes more evident that Jones is waiting for his own Lombardi moment, a victory that bears no connection to the NFL’s Team of the ’90s. Any mention of Johnson serves as too strong a reminder that the Cowboys have been a money-making machine but not a championship enterprise for a quarter of a century.

For comparison’s sake with other two-time Super Bowl winners, Mike Shanahan is not a Hall of Famer. But he’s in the Broncos’ Ring of Fame. Tom Flores was inducted into both Canton and the Raiders’ Ring of Excellence last year. Bill Parcells made it into the Giants’ Ring of Honor three years before the Pro Football Hall of Fame called his name.

Johnson has his yellow jacket, but he remains outside the club’s 22-member Ring. Jones has mentioned numerous times how Tex Schramm, who created the Ring, told him to keep it exclusive, and there’s nothing wrong with that. It’s not a mandate every club adheres to. I wouldn’t say the Kansas City Chiefs’ history is quite on par with the Cowboys, but they have 49 players and coaches in their Hall of Honor.

To each his own.

Meanwhile for Dallas, Jimmy waits his turn with only the faintest level of interest. That doesn’t mean that fans aren’t embarrassed by this omission or the fact that you can’t really pretend to tell the story of the Cowboys’ success without Johnson’s franchise turnaround playing a major role.

“I’ve got a lot of other guys that have laid a lot on the line that deserve to be in this Ring,’’ Jones said.

No doubt about it. Meanwhile a coach who thumbed his nose at Jones at an owners’ meeting nearly 30 years ago still pays a price for it.