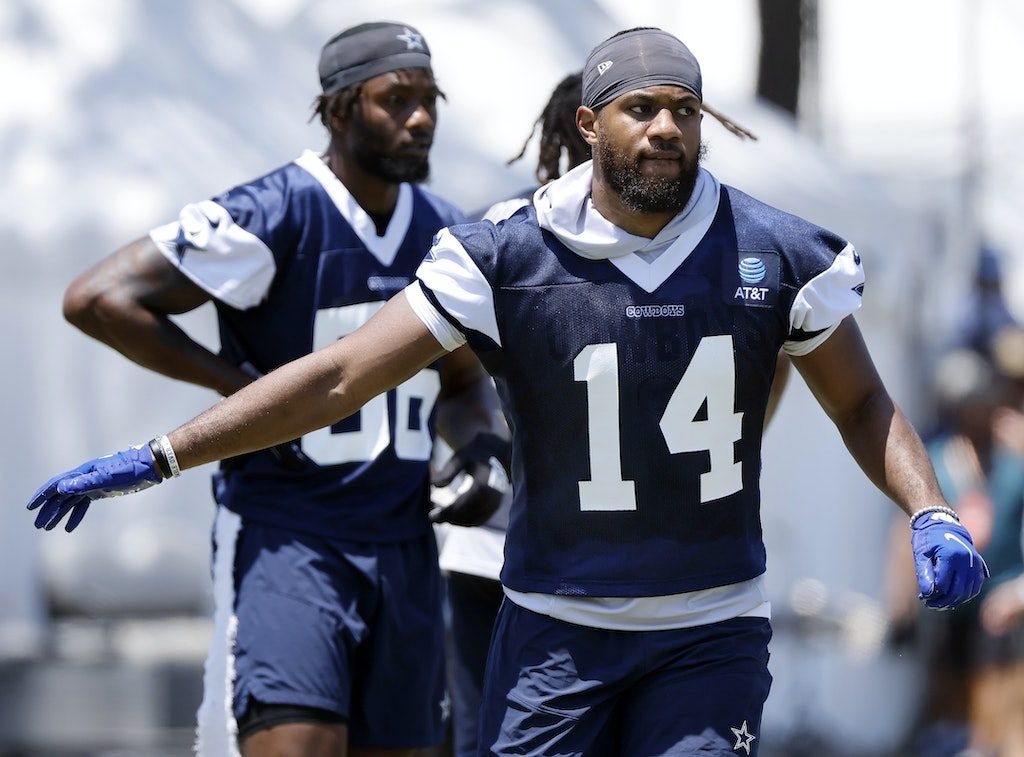 Jabril Cox, whose 2021 season ended prematurely because of a torn ACL, appears to have recovered well enough that he could exceed expectations this season and be in the Cowboys’ mix at linebacker. (Tom Fox/Staff Photographer)

The Cowboys have completed the first week of training camp in cool Southern California. What’s stood out most to our team of beat writers? SportsDay’s David Moore, Calvin Watkins and Michael Gehlken break it down in the season’s first Cowboys Beat Writers Roundtable:

What or who has impressed you the most through the first week of camp?

David Moore: There are always young players who flash early in camp. Some will sustain and build on that early promise. Others will fade over the course of camp. It’s nice to have a little more time to make a determination. So, I’m going to cop out and go with a veteran. Anthony Brown has been outstanding in the early days of camp. The corner has one interception, dropped another and has broken up a handful of other passes. He’s playing with more confidence that’s evident. Head coach Mike McCarthy suggested a few days ago that the media need to give Brown more love. Here it is.

Calvin Watkins: Sam Williams jumps out at first glance. There was so much negativity surrounding Williams when he was drafted, but now that’s subsided. We’ve seen a relaxed Williams play so well in the early stages of training camp. He’s quick, powerful and still learning. Not sure how this entire season will go for him, but I’m encouraged by his potential. At some point he might challenge for a starting gig at defensive end opposite DeMarcus Lawrence. Now that would be something.

Michael Gehlken: My expectations for Jabril Cox were pretty tempered before camp. The Cowboys linebacker suffered a torn ACL last Halloween as a rookie and missed the entire spring. He was primarily a special teamer before the injury, playing only nine defensive snaps. To assume he’d jump into the linebacker mix in Oxnard seemed unfair to him. Then, Cox took the field. Yes, he is on a snap count. Yes, he has yet to wear pads. But his lateral range Saturday when chasing down running back Rico Dowdle before the front-left pylon and save a touchdown reminded me of his pre-ACL rundown of New York Giants quarterback Daniel Jones in Week 5. Cox also exhibits what Cowboys owner Jerry Jones called “distinctive” leadership ability. The 2021 fourth-round pick is off to a great start. Credit to Cox and the Cowboys’ staff, including director of rehabilitation Britt Brown, for their work to reach this point.

What or whom will you be watching at Monday’s first padded practice?

David Moore: Linemen. This is the focus when the pads come out for the first time. You don’t get a true feel for where an offensive or defensive lineman is until you see them match up in pads. First-round pick Tyler Smith and second-round pick Sam Williams top the list. Neville Gallimore is also intriguing. He was having an outstanding camp one year ago before suffering an injury that knocked him out all but five games last season. It will be interesting to see if he picks up where he left off.

Calvin Watkins: The wide receivers are the weakest position on this team, and I mainly want James Washington to step up. He’s displayed some good things in training camp so far, but there have been some issues hitting him on deep passes from QB Dak Prescott. Washington has to find a level of consistency to be relied on as the No. 2 receiver until Michael Gallup comes back.

Michael Gehlken: Two things come to mind. The first is the offensive line. This has the potential to be one of the league’s most physical units. Rookie first-round pick Tyler Smith is a big part of that at left guard with right tackle Terence Steele an overlooked enforcer, too. The second is discipline. When the pads are on and practice tempo quickens, can Cowboys players find that thin line between wrecking and reckless, avoiding some of the senseless penalties from 2021?

Do you anticipate the Cowboys will add more veteran talent before the season kicks off?

David Moore: Sure. Edge rusher Takkarist McKinley, who has a history with defensive coordinator Dan Quinn, dropped by camp Saturday for a visit. There’s interest there. There will be an injury at some point in this camp that will leave the Cowboys thin at a position and prod them to dip into the veteran free agent market. Given the lack of proven depth in the offensive line, that would be a logical place to look. And potentially receiver, depending on how this camp unfolds.

Calvin Watkins: Oh yeah. They’re looking at defensive ends, not because there’s a deficiency but if you add more talent it only helps the team. Takk McKinley is a good run-stopper the Cowboys like, and he’s healthy so he can play now, based on what Jerry Jones has said. The signing of receiver KeVontae Turpin is another example of this, and the Cowboys have a weakness at that position. Turpin can bring speed — he is 155 pounds so I expect him to be fast — and return ability. He was fielding punts in practice, so that’s a positive. But I would expect another receiver to get picked up soon, as well.

Michael Gehlken: Edge defender Takk McKinley was in town Saturday for a visit, undergoing a physical and meeting with various Cowboys coaches and officials. He tore his left Achilles in December. A reunion with defensive coordinator Dan Quinn and defensive line coach Aden Durde from their time together on the Atlanta Falcons could be the reset his NFL career needs. He is certainly in the mix. Beyond that, injuries will greatly influence at what, if any, positions Dallas adds veteran help before Week 1.

What’s the latest on the kicker competition and when can fans expect it to be resolved?

David Moore: The kicker competition is up and … running? Rookie Jonathan Garibay and Lirim Hajrullahu, one of the CFL’s better kickers, made their first appearance before media and fans in this camp on Saturday. Hajrullahu was 7-of-8, missing a 47-yarder wide left. Garibay, from Texas Tech, went 4-of-8, with all of his misses between 44 and 50 yards. The competition is far from done, but this was not the best first impression for Garibay.

Calvin Watkins: It’s over. My man Lirim Hajrullahu went 7-for-8 on field goal tries on the first day of competition against Jonathan Garibay, who missed four of eight attempts. Now maybe the second wave of competition will lead me to change my mind. But right now, it’s Hajrullahu’s job to lose.

Michael Gehlken: I imagine this competition won’t be settled until a preseason game or two unless Garibay has more days like the one Saturday. He really mishit the final miss, a wide-left duck that struck the lights on the NFL Network set. Maybe it was just nerves for the undrafted rookie. In any event, Lirim Hajrullahu looks more comfortable. Having worked with holder Brian Anger last year and long snapper Jake McQuaide off-and-on since 2020 with the Los Angeles Rams only helps his comfort and confidence.