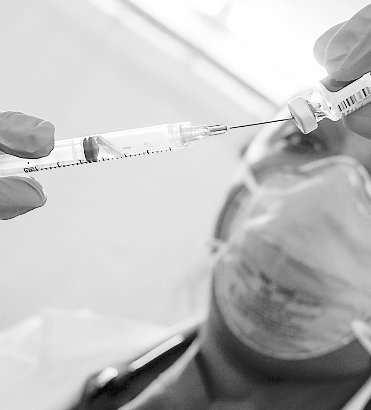 AP Photo/Mary Altaffer, file A reader points out that we will not beat the COVID pandemic until almost everyone is vaccinated.

NEXT IMAGE
Getting vaccinated is a civic duty

I was out for an early walk on another hot, steamy morning.

Walking along, I noted several face masks lying at the curb, like dead humans.

The paper also reports news of people fighting over mask mandates, and fighting over what they believe is their constitutional right to refuse to get vaccinated, and to refuse to abide by the mandate to wear a mask in order to prevent the spread of the delta variant.

I heard a woman on public radio, who was asked if she had received the vaccine. “No,” she replied. “Why not?,” the interviewer asked. She answered most emphatically, “Because I don’t trust that it works, and I don’t know what’s in the vaccine.”

Please people, do your duty to your families, friends and the people who live in our beautiful state.

Please get vaccinated or we will never wake up from this nightmare. Don’t wait to be thrown to the curb, taking innocent people with you.

Pacific Gas and Electric’s power lines sparked the deadly 2018 fire in Paradise, Calif. The company pleaded guilty to 85 deaths and destruction of a city. Now, as the Dixie wildfire continues to rage, Central Maine Power’s proposal to build high-voltage transmission lines through Maine forests seems extremely questionable – if not insane. In 2019, the Maine State Federation of Firefighters expressed their concerns about the corridor. A recent letter to the editor from Sen. Scott Cyrway also warned of the dangers, citing a Memorial Day pole-line wildfire in Concord Township along a strip clear cut for CMP’s Corridor.

We are victims of our own folly; manmade global warming is upon us. The UN has assessed our situation at “code red for humanity,” a global crisis point.

Our reckless destruction of nature must stop. Forests are vital to sequestering carbon, providing oxygen, cooling the earth, and sheltering wildlife. We must protect them and stop taking such huge risks with nature.

Maine forests, one of the last large tracts left in the US, could easily become a fire hazard; all it takes is a couple of dry years.

Yet, incredibly, CMP intends to string 1200-megawatt lines through this vast forest tract.

Surely the unacceptable fire risks to Maine’s woodlands outweigh any benefits of the CMP Corridor.

Let’s take a lesson from California. A Dixie fire must never happen here.

Seaweed is part of the climate solution

The Sargasso Sea is a large floating body of algae with unique properties. According to the Encyclopedia Britanica: “The sea reaches depths of 5,000–23,000 feet (1,500–7,000 m) and is characterized by weak currents, low precipitation, high evaporation, light winds, and warm, saline waters, all combining with the lack of thermal mixing to create a biological desert largely devoid of plankton, a basic food supply for fish.”

Ocean scientists have just begun to explore the potential of these floating masses of algae in Ocean afforestation using CDR methods (basic seaweed farming using sugar kelp which is food source) or the rapidly growing belts of the floating seaweed Sargassum as a natural analogue for ocean reforestation; the principal gain is from photosynthesis, fixation of carbon and release of oxygen.

Leonard T. Bach examined this possibility and concluded: “Ensuring that global warming remains So if the global warming enthusiasts in the White House want a massive reduction of CO2, Maine might provide the perfect tool!

First, he implies that there will be resistance to electric vehicles “similar to face masks and vaccinations”, citing no evidence.

As EVs come down in price, increase in range and clean up the air we breathe every day, they are likely to be hugely popular.

Second he implies that we will not be able to generate enough clean energy for millions of electric vehicles. This is a valid question, but no data is included to support the allegation. After all, this transition will take place over decades, and the expansion of solar and wind over previous decades has been remarkable.

His main point seems to be that overpopulation, not fossil fuels, is “the main problem” but offers no solutions, instead citing Michael Moore’s film, Planet of the Humans, as evidence.

That film was widely discredited because it was riddled with misinformation.

His implied message is to throw in the towel, and seems designed to make people feel hopeless about a problem that science tells us can still be dealt with in many ways, challenging though that may be. Doomism is increasingly fashionable these days, but it is not a climate change solution.