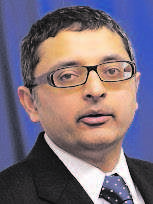 NEXT IMAGE
Rapid-response testing plan falters
As he announces two more Maine deaths, the CDC chief says it’s ‘back to the drawing board’ on acquiring test kits.
By JOE LAWLOR
Staff Writer
Two more people have died of COVID-19 in Maine and the number of confirmed coronavirus cases rose to 537 on Wednesday, as the state reported a setback in its efforts to obtain important new rapid-response tests from a manufacturer in Scarborough.

The Maine Center for Disease Control and Prevention said it has only received about 5 percent of the rapid tests it believed it would get from Abbott Laboratories.

The Abbott tests can produce results within minutes and help preserve the critical protective gear – which is in short supply – for health care workers treating COVID-19 patients.

Originally, Maine expected to receive 15 devices with the capacity to conduct about 2,300 tests. Maine CDC and others in state government continue to work with Abbott Labs to increase the availability of these devices and test kits.”

Dr. Nirav Shah, director of the Maine CDC, said the state lab is now completing coronavirus tests within 24 hours and that the agency continues to distribute limited supplies of personal protective equipment to hospitals, long-term care centers and other facilities throughout the state.

But Shah expressed disappointment that the Maine CDC received “much, much less” testing material than it expected to receive from Abbott. He said the state was going “back to the drawing board” to make other testing plans.

John Koval, an Abbott spokesman, said the 115 tests were an “initial shipment” and that Maine will get more tests, although he didn’t say how many.

“More tests will be coming to Maine this month. We are producing 50,000 tests per day – and as we’ve said, we’re prioritizing delivery to outbreak hotspots across the country for front-line healthcare workers and first responders,” Koval said in a statement.

Long said the CDC is not blaming Abbott for the shortage.

“The Maine CDC has no beef with Abbott Labs at all,” Long said. He said the U.S. Department of Health and Human Services provided the information last week that Maine would receive 2,300 tests from Abbott.

That projection has so far proven to be incorrect.

Shah said last week that the tests would be a key component in the fight against the virus, giving hospitals an important tool to preserve protective gear, such as masks, gloves and shoe coverings.

That’s because the protective gear has to be worn for all suspected COVID-19 patients until it’s determined whether a patient is positive or negative. If a patient is found to be negative within minutes, the hospital can forgo using the gear.

There’s a national shortage of protective gear, and some states, including Maine, are manufacturing their own gear to try to keep up with demand.

Ninety-seven health care workers in Maine have tested positive for COVID-19, the disease caused by the coronavirus, the CDC said Wednesday.

Abbott officials have said the Scarborough facility would produce more than 1 million of the tests per month and would be distributing them across the nation.

Martin’s Point Healthcare in Portland – a primary care network that has several locations in southern Maine and Portsmouth, New Hampshire – announced in a news release Tuesday that it had received 1,000 of the Abbott tests.

The Abbott tests will be available at Martin’s Point locations in Portland and Brunswick.

Long, at the Maine CDC, said the Martin’s Point tests are “not part of the allocation to Maine CDC.” He said the agency plans to talk to administrators at Martin’s Point about how best to use the Abbott testing materials.

Koval said Martin’s Point “was an existing customer” and that they already had Abbott equipment set up to perform the tests.

“We selected them to receive tests because they already had the ID NOW instrument installed throughout their network in order to reach as many people as quickly as possible,” Koval said in a statement.

Martin’s Point, in the news release, said they have requested 1,000 tests per week. Steve Amendo, vice president of marketing and community engagement for Martin’s Point, said the organization will work with the Maine CDC to support improved testing capacity.

“Given that we have a supply of the new rapid COVID-19 test kits, we have reached out to the Maine CDC and other health care entities to see how we can best support them,” Amendo said in an email. “We are exploring how we can expand testing to include others outside of Martin’s Point with urgent needs.”

The pandemic has infected 1.5 million worldwide, causing more than 87,000 deaths. In the United States, the worldwide leader in cases, COVID-19 cases stood at 420,705, with 14,369 deaths through Wednesday afternoon, according to the Worldometer website.

In addition to reporting two additional deaths in Maine, the state CDC said Wednesday that 101 people have been hospitalized with COVID-19 and 187 people have recovered. The 537 cases reported Wednesday represented an increase of 18 from Tuesday.

Shah said one of those who died was a woman in her 80s from Waldo County and the other a man in his 80s from Cumberland County.

A total of 14 Mainers have died from the virus, and Shah noted at a media briefing that 13,000 other families across the country had lost family members in the pandemic.

But Shah said physical distancing measures are saving lives, although he could not predict when the state would begin reopening segments of society. Schools, businesses, beaches, parks, hotels and much of society have shut down in an attempt to fight the spread of the virus and reduce deaths.

“People in this state have been all in,” Shah said. “Who would have thought three months ago that canceling a birthday party, or a pub crawl or a prom would save lives?” He said changes that would have been “utterly inconceivable” a few months ago have been accepted by Maine people.

Shah said the Maine CDC is working with hospitals to get better real-time data on how many people are currently hospitalized for COVID-19. Although the agency gives daily hospitalization numbers, that data is cumulative and does not reveal the daily count of hospitalizations. Shah acknowledged that the hospitalization data has gaps, a shortfall that was detailed in the Press Herald on Wednesday.

“It is a top priority to get a better handle on that,” Shah said.

There are 305 ICU beds in Maine, of which 154 were available Wednesday, Shah said, and there are more than 330 ventilators on hand, 282 of which were available. In addition, Maine has 233 alternative ventilators, he said.

Shah said Wednesday that no final decision has been made about how to staff those facilities, which would be run in conjunction with local hospitals, some of which have limited numbers of health care workers available to treat coronavirus patients.

Pender Makin, Maine’s education commissioner, said in an online post on Tuesday evening that because of coronavirus, schools should prepare for remote learning for the rest of the school year.

And on Wednesday, Yarmouth, Portland and South Portland became the first of what is expected to be many districts to announce that they will keep schools closed and complete the 2019-2020 school year by remote and online learning.

Shah responded Wednesday to multiple questions about when sections of society might reopen, saying there are many factors to consider. He also said the reopening would be gradual, and not like “flipping a switch.”

“There is not a math equation on our whiteboard to tell us when it is OK to get us back to where we were before,” he said.