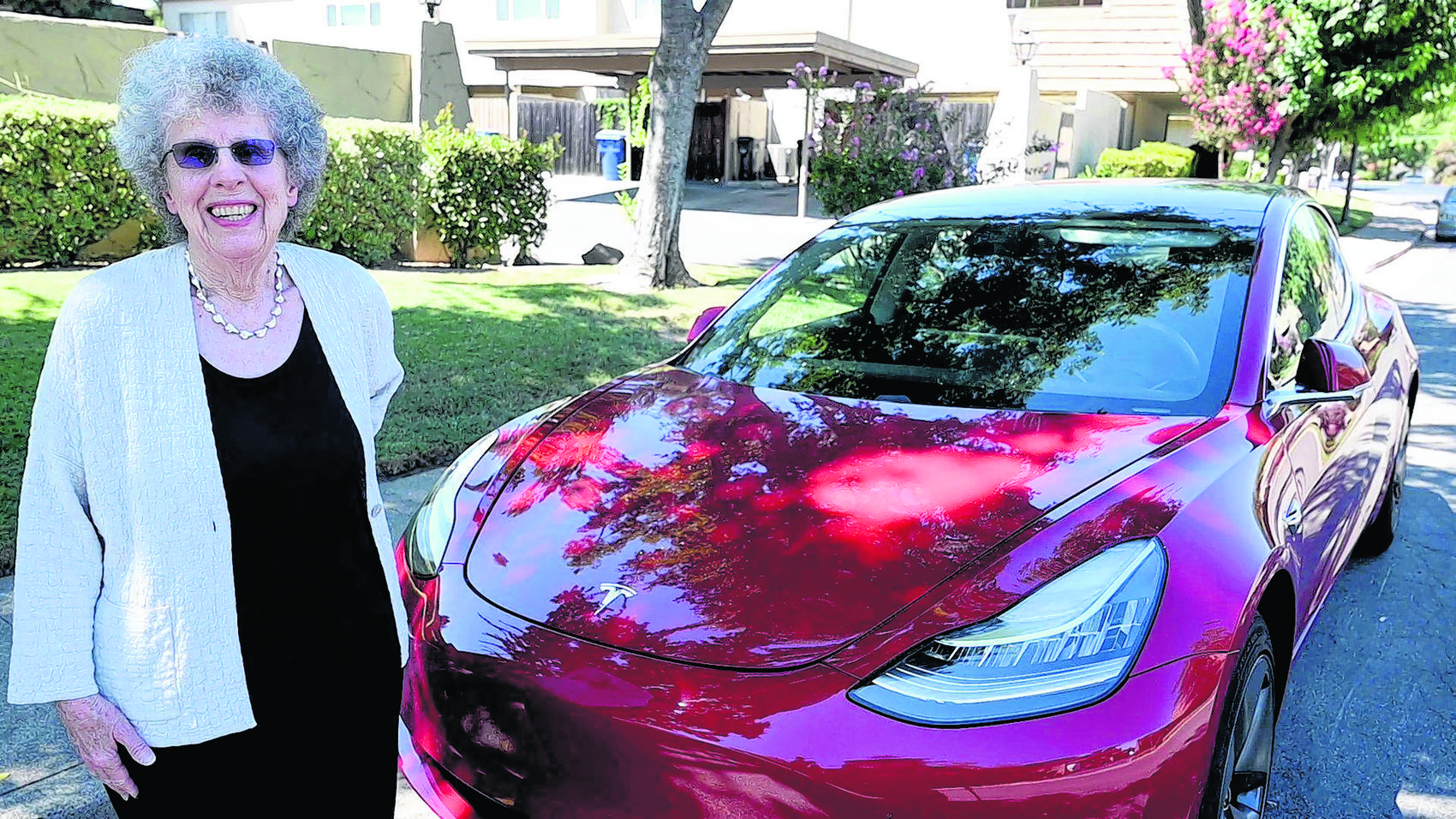 Roseanna Torretto stands in front of her 2018 Tesla Model 3 in Carmichael on Tuesday. “In 2018, the charging locations were limited,” said Torretto, one of many people who live in apartments or town homes who have run into complications installing chargers. Torretto needed homeowners association approval to have a Tesla wall connector installed in her patio. 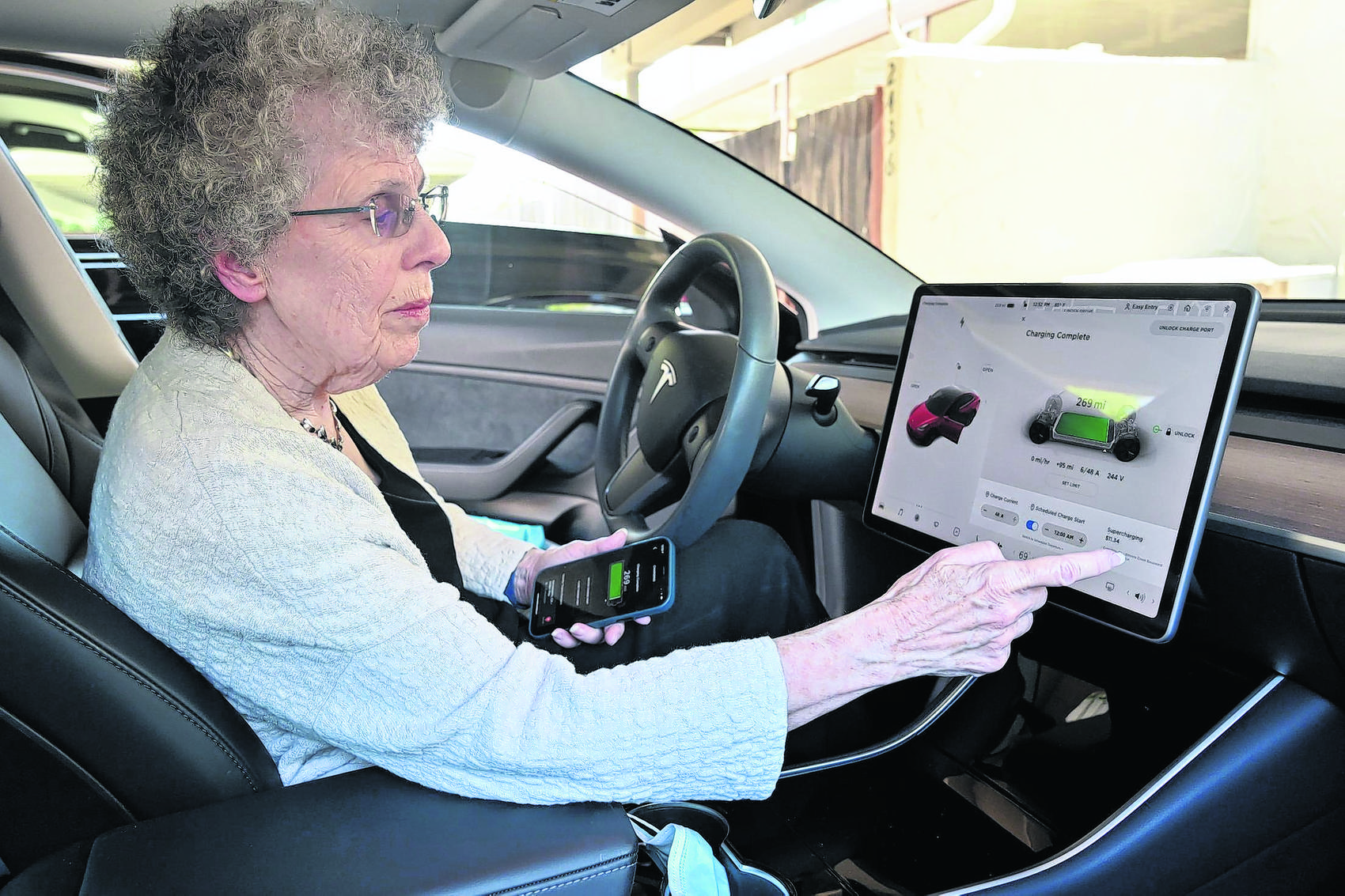 Roseanna Torretto shows the charging information and how much a supercharge would cost in the local area in Carmichael on Tuesday. Like many EV owners, Torretto schedules to charge her car at midnight to avoid peak SMUD hours.

Gov. Gavin Newsom last year set California on a path to eliminate the sale of new gas-powered cars by 2035, leading cities like Sacramento to draw up plans for tomorrow’s electric vehicle drivers.

Fewer of them are in rural zip codes or in zip codes with higher percentages of non-white residents, like Sacramento’s Fruitridge Manor and North Natomas neighborhoods. Income is not a strong indicator of station distribution.

“A lot of the charging infrastructure to date has been concentrated where a lot of the jobs are near state offices and a lot of the other business activity in the central city of downtown,” said Jennifer Venema, the interim Climate Action Lead for the City of Sacramento. Venema has worked on zero-emission vehicle projects for the city over the past four years.

Her office is focusing on increasing access and installing more public charging stations for low-income and disadvantaged communities.

That’s where they’re most needed, said Gil Tal, the director of the Plug-in Hybrid and Electric Vehicle Research Center at the University of California, Davis. He says more charging stations and more electric cars could reduce harmful vehicle emissions in neighborhoods that are already marked by poor health.

“Disadvantaged communities many times suffer from bad air quality because they are next to traffic routes or next to industry or just less desirable locations,” Tal said. “Electrifying these areas are, I think, higher priority, not just because of greenhouse gases, but also because of local air pollution.”

Where is electric vehicle infrastructure lacking?

However, many low-to-moderate-income people who live in apartments or affordable housing may find installing and accessing charging infrastructure is more complicated. They can’t simply tap into an outlet in a garage.

A major gap in electric vehicle infrastructure is in introducing more chargers in low-income communities and multifamily households, like apartment complexes and townhouses.

“One of the biggest barriers right now is being able to affordably install charging infrastructure at multi-unit dwellings,” said Leslie Aguayo, the climate equity program manager with the Greenlining Institute. “And most low-income and middle-income folks live in apartments. That’s like the one place we haven’t been able to crack the code on how to accessibly install charging infrastructure.”

Roseanna Torretto did not have access to a home charger when she first purchased a Tesla Model 3 for her 75th birthday in 2018. Torretto lives in a townhouse in Carmichael, which has two charging stations for a population of over 62,000 people.

“When I first bought the car, I didn’t have the charging connector installed yet, so I charged the car at work,” Torretto said.

Torretto works as a software specialist at the California Department of Technology, and in 2018 her workplace had four charging stations. She said that because employees had to share these chargers, she couldn’t get a full charge at work. Each electric car owner had a two-hour limit and would have to move their car when their time was up, gaining about 50 miles of charge in that time.

Each unit at Torretto’s complex has a covered parking spot, but no garage. She has since received approval from the California Homeowners Association to install a Tesla wall connector to her patio.

If not for the installation of the Tesla charger, Torretto said she would have just plugged in her vehicle to an ordinary wall socket.

“It would just take a much longer time,” she said.

Charging is much easier for people in single-family homes.

“I just plug it back in at night and then it’s full in the morning,” Robinson said. “It’s kind of like having a car that always has a full tank of gas.”

What is Sacramento doing to fill the gap?

Several efforts are underway to increase access to infrastructure for low-income communities and multifamily households. They include installing stations at community centers, offering grants for infrastructure projects and requiring developers to install them in certain new projects.

The city recently received a $1.8 million grant from the California Energy Commission that will allow it to provide Level 2 chargers at 13 community centers and libraries, primarily in low-income neighborhoods, including Coloma and Colonial Heights. Level 2 chargers are the most popular charger for home and public fueling and add about 14 to 35 miles per hour of charging.

“The real goal is to ensure that no community is left behind and that we’re specifically providing public charging options for those that may not be able to charge at home,” Venema said.

Renters may find it difficult to justify installing chargers and investing in property owned by someone else, which is why, Venema said, the city wants to create incentives for landlords to install charging stations.

“We’re very conscious in terms of raising property value,” Venema said. “We don’t want that to impact or challenge people’s ability to continue to rent, even though the city has rental protections.”

For instance, an ordinance passed by the Sacramento City Council in April 2021 will require new nonresidential and multifamily developments to include electric vehicle infrastructure.

“By adopting that ordinance now, council is setting the signal and the intention to the development community,” Venema said. “But the ordinance only focuses on new buildings and hence that goes back to the issue of how do we fill those existing gaps, especially with the focus on multifamily tenants.”

Phillip Reese of The Sacramento Bee contributed to this report.