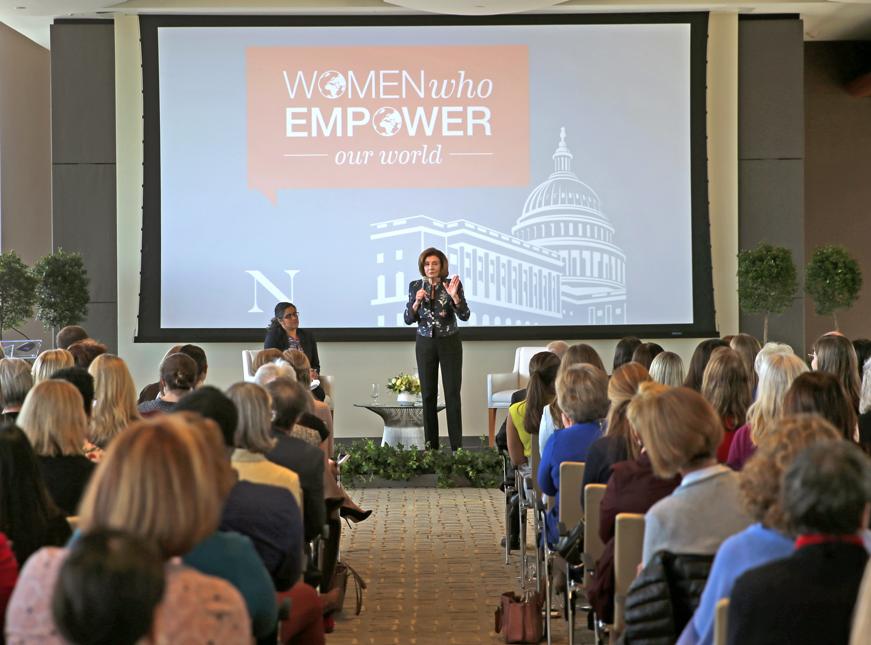 House Speaker Nancy Pelosi told a Boston audience Monday that America could not withstand a second term under President Trump, and that the Constitution, the American dream, and the environment are under siege.

“This election is a very important election. In my view, civilization as we know it is at stake,’’ said Pelosi, a California Democrat.

Pelosi was speaking at the Women Who Empower Our World Summit at Northeastern University Monday morning in a conversation with WBUR host Meghna Chakrabarti.

Asked about her level of concern for the dismantling of government norms under President Trump, Pelosi said she refuses to believe that Trump has “permanently scarred’’ the United States.

“Our country is a great country. It can withstand one term of the current occupant of the White House. It cannot withstand two," she said.

“Just look at his policies and his lack of respect for the office which he holds and what that means for our country,’’ she said. “I say to my Republican friends — and I do have them — ‘Take back your party. This is not who you are.’ The Grand Old Party has done so many great things for our country.’’

With past Republican presidents, like both Bushes, she said:

Pelosi faulted the president’s handling of the coronavirus crisis, which caused a historic drop on the stock market Monday. She noted that Trump had in 2018 eliminated the White House officials tasked with directing a national response to a pandemic and had more recently cut $700 million from the Centers for Disease Control and Prevention’s budget.

“This is a very dangerous situation for our country when it comes to public health in the near term,’’ Pelosi said.

Last week, Congress passed an $8.3 billion emergency spending bill to combat the coronavirus, fund vaccine research and development, and support lab testing and infection control. That was about four times more than the president’s proposal, which would have relied on shifting funds already dedicated to fighting Ebola. However, Trump did sign the measure into law, she noted.

Pelosi also assured her listeners that a woman will be elected president and shrugged off a question about whether the first female president could be a Republican. “That’s OK,’’ she said.

She declined to endorse a candidate for the Democratic nomination but noted she supports women candidates whenever she can.

“Women have to support women, if that’s really what the goal is,’’ she said. “But not to undermine women by saying, ‘I’m for you even though I don’t think you would do the best job.’ There’s a balance here. Clearly, any of our candidates could be a great president of the United States — without question, infinitely better."