Trump blasts 2 on high court
Demands they skip his cases 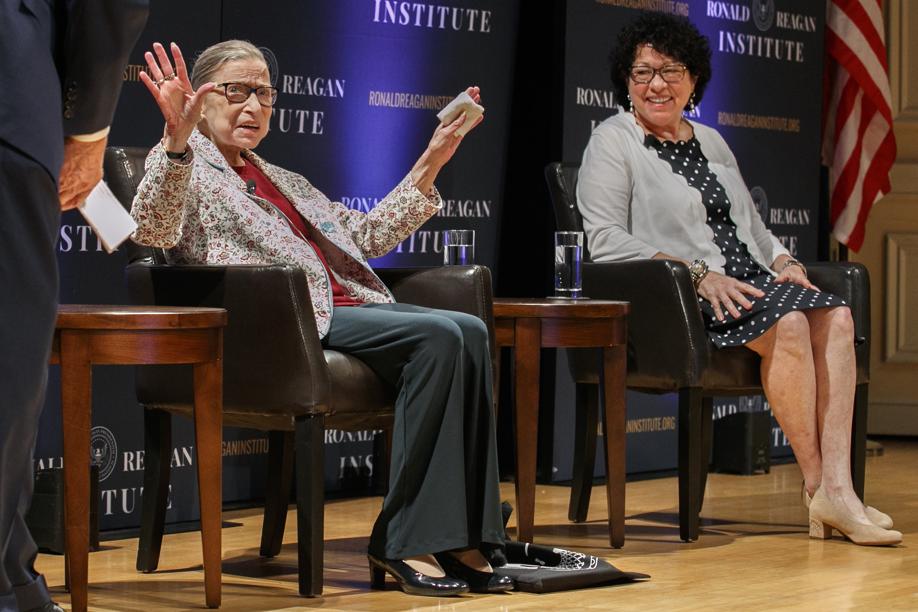 Justices Ruth Bader Ginsburg (left) and Sonia Sotomayor were targeted on Twitter, even after the attorney general urged the president to avoid tweets about legal matters.

NEW DELHI — President Trump lashed out at two liberal Supreme Court justices Tuesday, escalating his battle with the US judicial system to new heights, despite entreaties by his attorney general to refrain from Twitter blasts that complicate the administration’s legal fights.

Weighing in on a domestic matter on a day of ceremony and meetings in India, Trump seized on an opinion by Justice Sonia Sotomayor and a years-old comment by Justice Ruth Bader Ginsburg to demand that the two Democratic-appointed jurists recuse themselves from any cases involving him.

“ ‘Sotomayor accuses GOP appointed Justices of being biased in favor of Trump,’ ’’ he wrote on Twitter, citing Laura Ingraham of Fox News. “This is a terrible thing to say. Trying to ‘shame’ some into voting her way? She never criticized Justice Ginsberg when she called me a ‘faker.’ Both should recuse themselves on all Trump, or Trump related, matters!’’

“While ‘elections have consequences,’ ’’ he added, “I only ask for fairness, especially when it comes to decisions made by the United States Supreme Court!’’

The justices and Chief Justice John Roberts, who chided Trump in 2018 for his criticism of an “Obama judge,’’ had no comment, court spokeswoman Kathy Arberg said.

Trump presumably was referring to a dissent issued last week by Sotomayor against an order by the court allowing the Trump administration to proceed with a plan to deny green cards to immigrants who are deemed likely to become “public charges’’ reliant on government aid programs.

In her seven-page opinion, Sotomayor wrote that the Trump administration had become too quick to run to the Supreme Court after interim losses in the lower courts.

“Claiming one emergency after another, the government has recently sought stays in an unprecedented number of cases, demanding immediate attention and consuming limited court resources in each,’’ she wrote. “And with each successive application, of course, its cries of urgency ring increasingly hollow.’’

Sotomayor did not overtly accuse Republican-appointed justices of being biased in favor of Trump, as the president asserted, but complained the court “is partly to blame for the breakdown in the appellate process,’’ because it “has been all too quick to grant the government’s’’ reflexive requests.

She added: “Perhaps most troublingly, the court’s recent behavior on stay applications has benefited one litigant over all others,’’ a reference to the Trump administration.

The five justices who voted in the majority in the case were all appointed by Republicans, but Sotomayor did not frame her disagreement in partisan terms, and her dissent was written in much the same way as others by justices who lose divided rulings.

Trump did not seem familiar with what Sotomayor actually wrote but instead seemed to be reacting to a headline that characterized her statement in a far balder, more political way than she had. Asked by a reporter what exactly he found inappropriate, Trump demurred, saying “you know what the statement was.’’ When the reporter accurately summarized part of the justice’s dissent, the president said, “No, I don’t think that was it.’’

In adding Ginsburg to his attacks on Twitter and at the news conference, Trump resumed a four-year-old feud with the longest-serving liberal on the court. During the 2016 presidential campaign, Ginsburg called Trump a “faker’’ and said she could not imagine him as president.

He responded at the time that she should resign. She did not, but expressed regret, saying her remarks were “ill advised’’ for a Supreme Court justice, and promised that “in the future I will be more circumspect.’’

The justices are highly unlikely to comply with Trump’s latest demand that they recuse themselves from the many cases involving him. But the president’s attack raised the temperature of his continuing assault on the law enforcement and justice systems, which he has tried to bend to his will in increasingly bold ways.

Material from the Associated Press was used in this report.