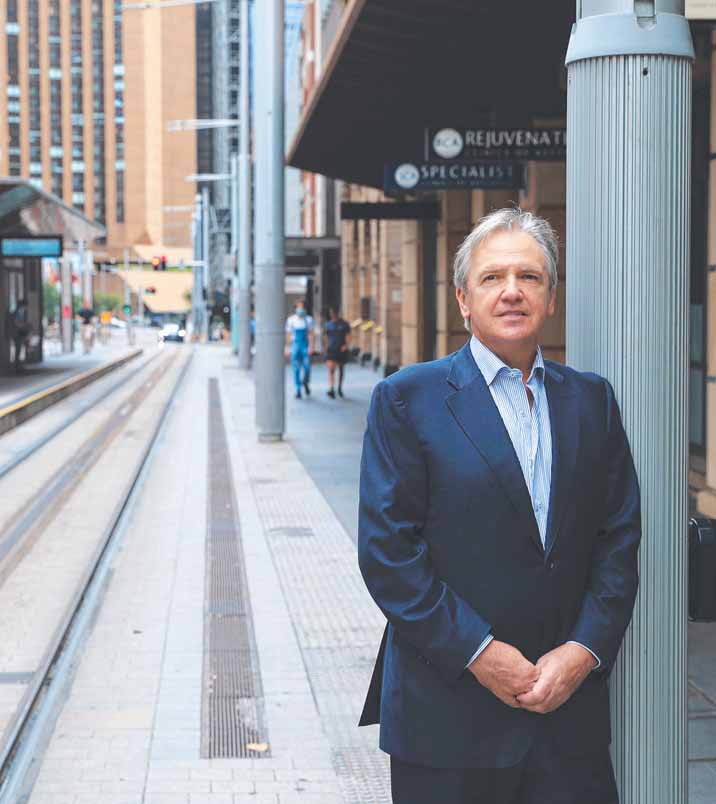 JOHN FEDER
ClearView MD Simon Swanson: ‘What we are seeing now is small businesses which don’t have any more resilience’

NEXT IMAGE
Our city centres really are dead, data shows
CHRIS HERDE
A shadow lockdown across the country’s capital cities in the wake of a surge in Covid-19 infections will have a long-term impact on downtown Australia, the nation’s largest business groups warn.

Staff shortages, a lack of stock and office workers staying home because of the latest Covid-19 variant, Omicron, has created a perfect storm for city-based firms.

The number of people in workplaces and stores is well down on the pre-pandemic baseline in the City of Sydney – 31 per cent and 49 per cent respectively – according to data collated by Google, which tracks movement through apps such as Goodle Maps.

Melbourne’s CBD is also feeling the impact of the increase in cases, and with major employers telling staff not to return to the office as expected early this year.

Business Sydney executive director Paul Nicolaou described conditions in the Sydney CBD as “very tough”. “There are people around but not a lot. What I’m seeing is more for lease signs and signs up seeking staff,” he said.

“Prior to Omicron things were looking very positive,” Mr Nicolaou said. “But Omicron came and that changed everything big time.

People have had to isolate, people got sick and most people stayed away from the city because of concerns in relation to their health and now businesses are struggling to get staff to keep their doors open.”

According to the Google data, visits to restaurants, cafes, shopping centres and entertainment venues fell 50 per cent from its baseline in Melbourne, 49 per cent in Sydney, 42 per cent in Adelaide, 38 per cent in Perth and 21 per cent in Brisbane.

The use of public transport fell by around half across all capital cities while workplace attendance fell 31 per cent in Sydney, 17 per cent in Melbourne, 15 per cent in Brisbane, 5 per cent in Adelaide and rose 16 per cent in Perth.

AMP Capital chief economist Shane Oliver said Covid-19 had accelerated the shift from working in a CBD office five days a week to two to or three days.

“The economic impact the first time we had lockdown in March 2020 was huge,” he said.

“By this time businesses and households have found better ways to do things.

“With each wave more and more people adjust to not going into the CBD and it becomes more of a structural change rather than a temporary change.

“We have got to this point because technology has allowed us to. It was always going to happen but it may have taken a decade or more. Now because of Covid it’s taken a couple of years.”

Dr Oliver said he expected in the long run that suburban retailers would benefit from the virtual lockdown of the CBD.

“CBDs won’t become ghost towns but in time if staff continue to work from home businesses will have to give up office space and there will be an adjustment made and leftover office space   will be converted into apartments, but that will take years,”

Melbourne Chamber of Commerce chief executive Scott Veenker said it was “really hard” for traders in the CBD.

“I was talking to some members who said 50 per cent of their staff have either got Covid or are isolating which resulted in them closing,” he said. “Also, the whole CBD is suffering because they don’t have the foot traffic because workers were staying home.”

Mr Veenker said the CBD had built up momentum towards the end of last year but Omicron has set confidence back. “We need to build that confidence and we can do that if the federal government made more rapid antigen tests freely available,” he said.