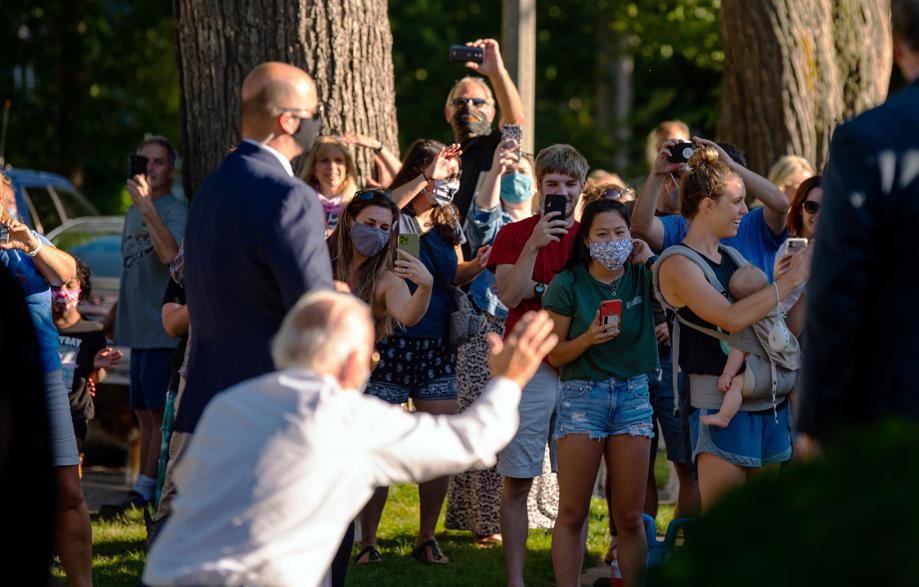 Joe Biden rallied some of his supporters at a stop in Wauwatosa, Wis., on Thursday.

Joe Biden, the Democratic presidential nominee, and his running mate, Senator Kamala Harris, are planning an accelerated in-person travel schedule and the campaign is ramping up its on-the-ground activities as the 2020 race hurtles into its homestretch. Top Biden advisers detailed the new strategy in a conference call Friday and described the contest as fundamentally steady despite the volatility of the news environment.

In a wide-ranging briefing with members of the news media less than two months before Election Day, Biden’s team also expressed optimism about learning some voting outcomes on what many expect may be a chaotic election night.

Biden’s chief strategist, Mike Donilon, said that despite the onslaught from President Trump and Republicans during their party convention late last month, the campaign saw Biden entering the fall contest with his standing in the race largely unchanged, suggesting that the Republicans had not negatively defined him.

“It was imperative for him to move the election at this period,’’ Donilon said of Trump. Pointing to pre- and post-convention polls that showed Biden leading, he continued: “That didn’t happen. So I think that speaks to the vice president’s strength and I think it speaks to kind of the stability in the race.’’

Even as he acknowledged that the race would be hard-fought, Donilon charged that Trump was not paying attention to “the central issue in this campaign’’ — the coronavirus pandemic and the challenges associated with it — and pledged that the Biden team would remain focused on it.

The campaign, Donilon said, continues to see the race as a referendum on Trump.

Certainly, some state-by-state surveys have shown a closer race compared with earlier in the summer, and the political environment continues to be extraordinarily unpredictable.

The campaign expects the contest to tighten in key swing states, acknowledged Jennifer O’Malley Dillon, Biden’s campaign manager, as she described the team’s efforts to chart multiple paths to the 270 electoral votes needed to win and nodded to growing efforts to expand on-the-ground campaigning.

Significant unknowns also remain, especially around what voting will look like amid a pandemic, and many Democrats in particular have expressed concern about voter suppression and Trump’s false claims about mail-in voting and fraud.

She cited Arizona as one state with a record of successful, extensive vote-by-mail practices.

As part of its fall effort, after months of virtual campaigning, the Democratic ticket will more consistently travel to battleground states while still being mindful of safety precautions, officials said. Activities will include retail campaigning, remarks, and round tables, with an eye on early vote windows, the officials said.

Harris is expected in Wisconsin on Labor Day, and Biden is slated to go to Michigan and Pennsylvania this week.

O’Malley Dillon ran through a slideshow highlighting details on fund-raising and staff statistics. She also noted efforts to engage key constituencies both state by state and overall.

The “strategic imperatives’’ listed on one slide for Pennsylvania, for instance, included “turn out the base in Philly’’ and “hold gains among non-college-educated white voters.’’

Kate Bedingfield, a deputy campaign manager for Biden, said in response to a question that Biden was being tested weekly for the coronavirus. Earlier Friday at a news conference Biden confirmed that he had been tested.