Meeting a masterwork, as if for the first time
Stripping a century of time and grime has revealed a great painting’s true colors and opened a new chapter for the Gardner 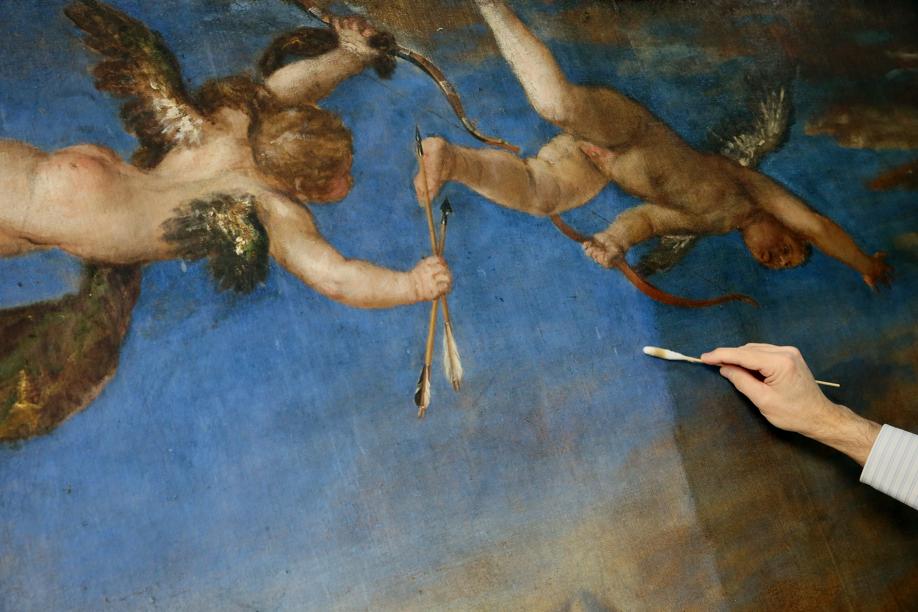 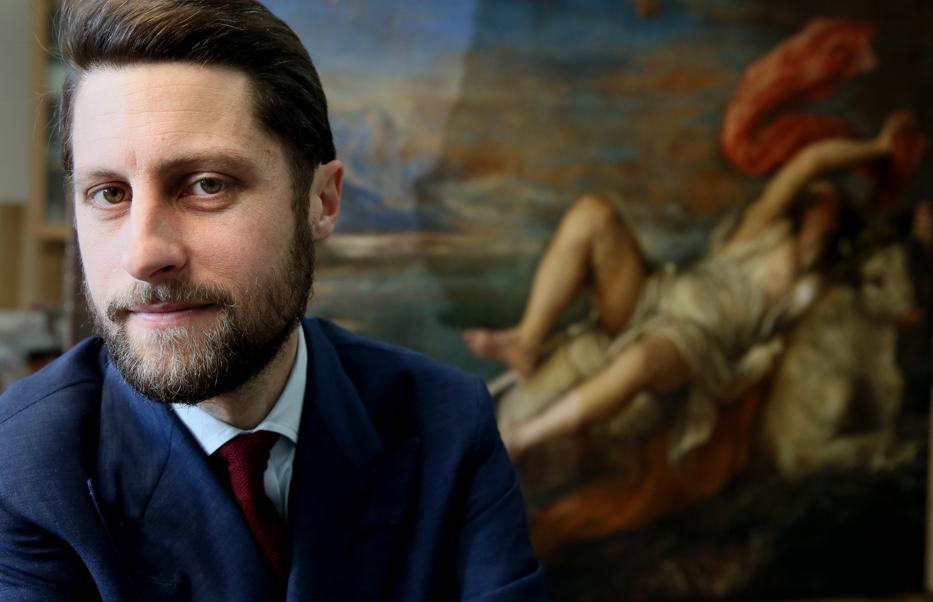 There’s a hole at the heart of the Isabella Stewart Gardner Museum, a void almost 6 feet tall. It’s big enough to drive one of those pint-sized postal trucks through, though here, in the ­Titian room, it leaves a gilt-framed expanse of red-brocade wall, a polite piece of signage, and an immeasurably larger emotional void.

Titian’s “The Rape of Europa’’ — the greatest Renaissance painting in America, some say, and now the jewel in the museum’s well-studded crown — “will be off view through January 2019 for technical examination and conservation,’’ the sign says, and you may breathe a sigh of relief. In a museum as famous for what’s missing as what’s there — the 1990 heist that robbed the Gardner of three Rembrandts and a Vermeer, among 13 works taken, remains the most astonishing unsolved art-world crime in history — a panic attack would be forgivable.

No, “Europa’’ remains close by, propped on a sturdy easel in the conservation lab in the museum’s sleek new wing, undergoing its first restoration work in more than a century. It will return to its place in February, in the room made just for it, but the engagement will be brief. Not long after, it will be gone again, this time for a year or more.

The painting will be part — the key part, some might say — of a traveling, ocean-spanning exhibition of the Old Master’s work that the Gardner has produced in partnership with some of the world’s premier art museums, which, at this point, do not want to be named.

It’s an opportunity for the Gardner to punch well above its weight in the museum world, and ultimately bring an entire trove of Titians garnered from all over right back to its galleries here — a triumphant finale to one of the art world’s big-deal blockbusters.

Even so, for a signature piece in a museum where not a thing was ever meant to move so much as an inch, per Isabella Stewart Gardner’s will, this is strange, indeed. After all, “Europa’’ has moved from her spot, where Gardner herself placed her in 1901 on the completion of her museum palace, only three times since: In 1929, when she sojourned across the road to the Museum of Fine Arts for a month or two with a conservator whose activities are sparsely documented; again in 1997, when she was subjected to what Gardner chief research and paintings conservator Gianfranco Pocobene describes as a “surface cleaning’’ (“They might have removed some dust,’’ he says); and then just a few years ago, and briefly, for an updated photo for the museum’s records.

A long-term departure has practical motives — the Gardner, in the painting’s absence, will fully renovate the Titian Room, and solve its age-old lighting problem in the process. But perhaps there is a deeper mission as well: the chance to change the public perception of a cloistered museum’s tightly held collection, once and for all.

And how might Mrs. Gardner herself take the news? Not well, if her will is any indication. Some may well argue the loan of “Europa’’ represents an affront to Gardner’s final wishes, as article seven of her will suggests: “[I]f [the trustees] shall at any time change the general disposition or arrangement of any articles which shall have been placed in the first, second and third stories of said Museum at my death,’’ it reads, then the entire collection, the museum building and property would be given to Harvard University to be sold.

In recent years, the museum has begun reading between the lines, and a bend-don’t-break ethic seems to rule. Gardner director Peggy Fogelman said article seven means the museum can’t permanently change Mrs. Gardner’s installation, nor can it introduce new works to the palace (a problem that had to be remedied with nothing less than an entirely new building, which opened in 2012). That’s not to say it hasn’t imported pieces — temporarily. A portrait of Gretchen Osgood Warren and her daughter by John Singer Sargent, a painter in Gardner’s inner circle, is on view right now in the Gothic Room. Borrowed from the MFA, it’s there by special permission of the office of Attorney General Maura Healey.

“But there is no provision in the will for loaning works,’’ Fogelman said, a statement that would no doubt be jarring to many among the museum’s longtime faithful.

But a loan by its nature is temporary, and so the Gardner has loaned, albeit sparingly: a Michelangelo drawing now on view at New York’s Metropolitan Museum of Art; a Botticelli painting currently at the Accademia Carrara in Bergamo, Italy; another pair of Botticellis borrowed by the MFA last year; a Carlo Crivelli etching that went to the Walters Art Museum in Baltimore in 2016; and the famed full-length Sargent portrait of Gardner herself to the Met in 2015.

Museums lend, and they borrow. It’s part of being a good citizen of the museum community, a sharing of wealth to contribute to scholarship and understanding, and to give audiences a depth of experience that a single work doesn’t offer. And, you have to give to get. When “Europa’’ comes home, she’ll be bringing friends, all of whom she’ll have been shown alongside in some of the biggest national art institutions in the world.

For a small institution like the Gardner, it’s a display of outsize ambition. This was, of course, by choice. Its patron, antiestablishment to the last, envisioned an intimate jewel box of civic pride for the people of her beloved city, not an encyclopedic display of cultural completism for the world at large.

But the Gardner, through its namesake’s savvy collecting, has the chips to play in the highest-stakes games around, and the Titian exhibition is one of the biggest. That means an exhibition that would more naturally land at, say, the Met will instead take its victory lap in the cozier confines of the Gardner’s new wing here at home.

Would Gardner herself see the value in that? We can only guess, but Fogelman is willing to venture as much. The director, who took over at the Gardner in January 2016, makes a broader, more fundamental argument.

“You can only get a real understanding of how [Titian’s works] evolved in his studio, and how they relate to each other, when you see them in person,’’ she says. “The sharing of new interpretations is important, and that can only happen when these things come together.’’

Until that happens here in Boston, we’ll have another chance of seeing “Europa’’ in an entirely new way. In the conservation lab on a recent sunny morning, Pocobene and curator of the collection Nathaniel Silver traded ideas in front of the canvas, propped and secured in an expanse of clear light. It looked different here, away from the dripping opulence of the room named expressly for it, as though layers had been peeled away to allow it to be seen clearly for the first time.

When it returns, that will be literal truth. In the lab, Pocobene was gingerly stripping away a layer of varnish on the painting’s surface with a cotton swab, to dramatic effect. The arc of a line charted his progress: On the left side, the varnish-free surface revealed vibrant color concealed by a century of yellowing and accumulated grime — a brilliant cobalt sky, the turbulent depths of an aquamarine sea, the fiery red of a cherub’s wing, the silver glint of a sea monster’s scales. To the right, where the varnish still sticks, it was dun and yellowy, with a griminess that its fresh portion highlighted without mercy.

Titian made it between 1560 and 1562, the last in his “Poesie’’ cycle, painted for King Philip II of Spain. In it, Europa, a virgin princess, distraught, is carried out to sea by the Roman god king Jupiter in the guise of a bull. She has good reason to be distressed. In Titian’s treatment of an epic poem by Ovid, the title is ghastly literal: Europa, against her will, will bear Jupiter children who will create the pillars of the civilized world, law and language among them. It’s the genesis of civilization by violent means, a creation myth freighted in terror. It’s awful, its beauty dark and profoundly unsettling, and you feel it in every whisper of Titian’s brush.

As Pocobene dabbed at Europa’s robes, his task crystallized. The sickly grey of the surface popped to bright white. In the opposite corner, Silver pointed to another revelation.

“Almost no one could see the signature before,’’ he says, crouching to where “TITIAN’’ stands out in the deep blue-green water, shimmering in gold. “You had to stand on a ladder and get very, very close. And here,’’ he said, pointing to the far shore, where a pair of women flail as Europa, on the back of a bull, is spirited away. “You could barely see these reflections.’’

On Pocobene’s freshly cleaned surface, Titian’s light flicks of color on the water’s surface were luminous and urgent. “It is, almost literally, night and day.’’

Pocobene’s and Silver’s work here breaks major art-history ground: The earthy-red sky that dominates the upper right portion of the picture, long read as a dusky sunset, is in fact a centuries-old misconception. Titian, like many of his contemporaries, used a glass-derived pigment for cobalt blue called smalt throughout much of the sky — a substance, art historians now know, that was prone to degrade quickly when mixed with oil to make paint. After 50 years, give or take, smalt would yield its blue to become a ruddy red or gray-brown, which Pocobene’s work here has revealed definitively for the first time.

When you restore a Titian — and not just any Titian, “the Titian,’’ Silver says, emphatically, “in 1560, painting at the height of his career, for the King of Spain’’ — word travels. On a recent afternoon in the lab, Silver and Pocobene received Ian Wardropper, director of the Frick Collection in New York, and Xavier Salomon, its chief curator. Pleasantries were exchanged, and then jaws dropped.

“Wow,’’ said Salomon, agog, as he leaned close to see the dividing line in the sky between blue and grey, varnish and not. “This is fantastic. I can’t wait to see the bull,’’ he said, almost giddy.

The Frick, with its astounding collection of Renaissance works, holds the other main contender for the title of America’s greatest Renaissance painting, Bellini’s “St. Francis in the Desert.’’ By the time he left, Salomon had happily conceded that title. “He gave it to us,’’ Silver smiled.

Would any of this have been possible without the blockbuster exhibition? Maybe. Restoring “Europa’’ “has been on the books for years,’’ Pocobene says. The urgency of the show pushed it forward.

“In many ways, it’s the ideal situation,’’ Silver says. “The Gardner never used to lend paintings, so there was no call, no urgency, for a treatment. It’s been the project of the exhibition that made us think anew about whether or not we wanted to undertake conservation — that was the catalyst.’’

To take the longer view, might a collection explicitly never to be touched have left not only the works static, but the reading of them, too? Silver, diplomatically, is circumspect.

“I think people think of the Gardner as this place where nothing ever changes, and that’s just not true,’’ Silver says. “This is one of the most visible changes you can see in a gallery, and I think it will really hit people.’’

Giving up “Europa’’ for a time pays an immediate dividend to Gardner’s beloved Boston: an old, faded Titian, made nearly new. And it just might be the catalyst for something else — a new way of thinking about the museum itself.