{{{Page.Title}}}
Criminal charges will be tough in anti-Semitic fliers case 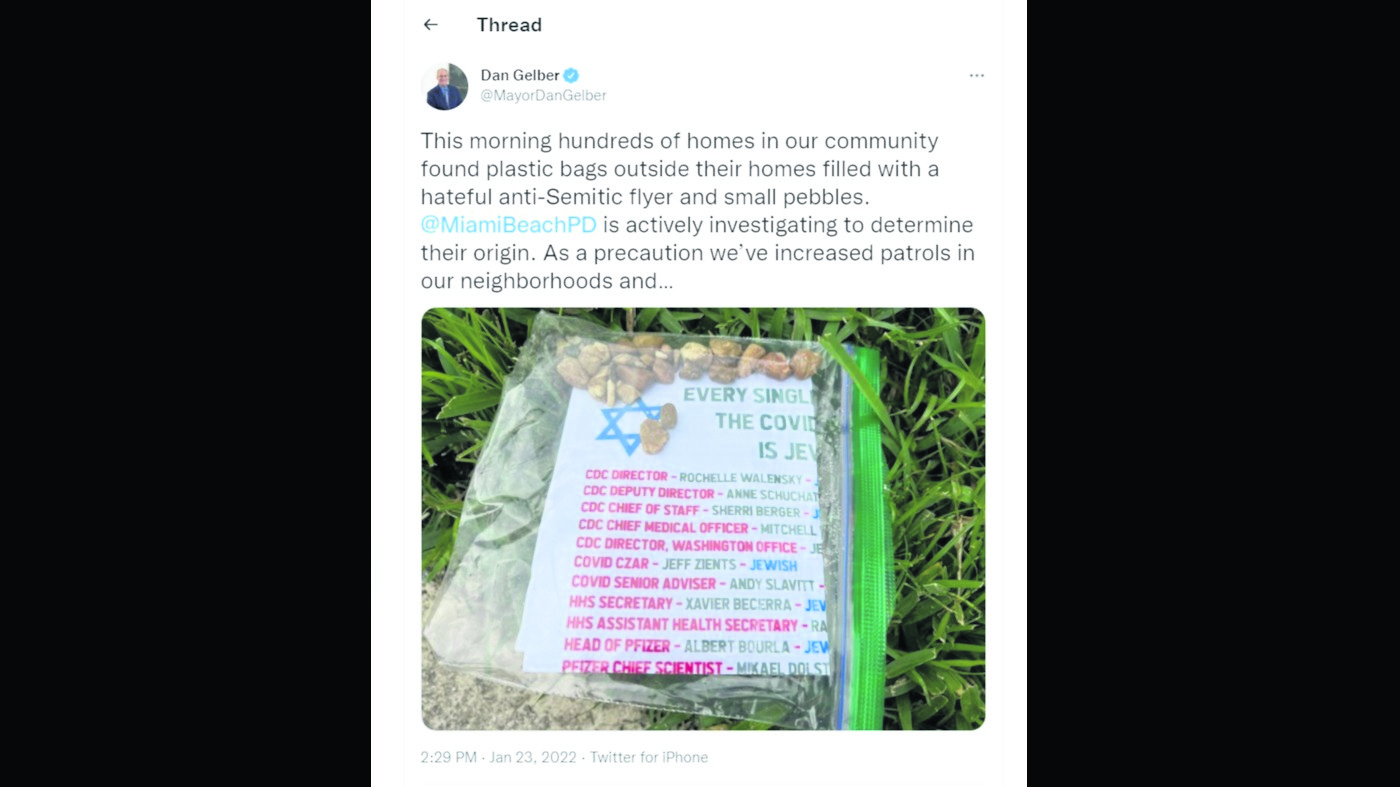 A tweet sent by Miami Beach Mayor Dan Gelber about anti-Semitic fliers distributed by a hate group in the city.

When virulent anti-Semitic fliers began showing up on lawns in Miami Beach earlier this month, the city’s police department tweeted about the hate campaign, urging residents to call detectives who were “actively investigating.” Media outlets chronicled the outrage from community groups and elected leaders.

The FBI said it would investigate too, as did Miami-Dade State Attorney Katherine Fernandez Rundle, who touted her hate-crime prosecution unit and said “we will not allow hate mongers, who are leaving garbage throughout our community, to divide and harm our community.”

But if history is any lesson, criminal charges will be difficult to make against the fringe group.

Time and again, it has pulled similar stunts across the country, distributing hateful propaganda meant to anger the community and — most important — garner publicity while staying within the bounds of protected free speech. The fliers illustrate the tricky balance law enforcement, community leaders and the media have in dealing with fringe hate groups who know their tactics will lead to cascading probes, social-media outrage — and terrified community members.

“It’s a difficult task in pushing back on this hateful behavior, but in the end criminal activity is hard to nail down,” said Carla Hill, the Anti-Defamation League’s associate director for the Center on Extremism, which monitors the group.

The American Civil Liberties Union of Florida, said in a statement: “Make no mistake — these flyers are hateful, grotesque, and reprehensible. Under the First Amendment, the dissemination of hateful flyers, no matter how vile or reprehensible, cannot be the basis for a criminal prosecution.”

South Florida law enforcement officials have yet to publicly say what law, if any, may have been broken by the people who distributed the fliers in plastic bags the weekend of Jan. 22-23 — Saturday night and early Sunday —in neighborhoods of Miami Beach and Surfside. Publicly, they insist the investigation is ongoing.

Fernandez Rundle declined to speculate on what potential charges could be. “I have full confidence that between Miami Beach Police and the FBI, if there’s evidence of a crime, they’re going to find it,” she said in an interview.

Legal experts say the challenge in making a criminal case arises because the fliers don’t target a specific person with a “true threat.” And in fact, the fliers dumped on lawns across neighborhoods even have a disclaimer at the bottom: “These flyers were distributed randomly and without malicious intent.”

In contrast, said Jon Garon, a law professor at Nova Southeastern University who teaches First Amendment issues, pointed to “wanted” fliers distributed by an anti-abortion group in the late 1990s that included the names and home addresses of abortion doctors. Courts, citing cases of murdered abortion doctors, ruled that the fliers constituted a “true threat.”

“The courts are fairly adept at distinguishing the hyperbole we’re talking about with these fliers [in Miami Beach] and identifying individuals who are being targeted for specific harm,” Garon said.

The group that is suspected of leaving the fliers is known as the Goyim Defense League, a small and loosely organized group of anti-Semites and white supremacists who have leaders in Florida, New York, California and Colorado. The group runs a website, displays banners adorned with swastikas across the country and distributes fliers playing on age-old hate tropes about Jews.

The Miami Beach Police Department has said it found the rental vehicle used to distribute the fliers, which claim “every single aspect of the Covid agenda is Jewish” and lists names of prominent U.S. health officials. Sources have told the Herald that the FBI tried to speak to one of the men believed involved, Dominic DiGiorgio, who lives in Port Saint Lucie, and is a documented leader in the group. He wouldn’t speak to agents.

Reached by the Herald on his phone and asked about the fliers, DiGiorgio said “I don’t know anything about that” and hung up on a reporter.

Members of the group appeared throughout Florida last May, shocking motorists by driving around in a van decorated with swastikas and giving the Nazi salute.

One of the men, Joseph Bounds, a known associate of the group from Colorado, was later arrested after a Miami police officer said he refused a command to step out of the street and away from traffic. Charges were dropped after a Miami judge, unaware of the man’s affiliation, criticized the arrest and seemed apologetic with him.

At the time, the reaction was muted. One advisory that circulated online urged residents to not engage them, and to “simply ignore them and to avoid a confrontation of any kind.”

For researchers who monitor extremists, the group’s more recent flier distributions come as no surprise — one of its leaders announced the propaganda pushes would unfold monthly. This time around, in South Florida, the reaction was more forceful.

On Jan. 23, Miami Beach Police tweeted that it was investigating the origin of the fliers. Miami-Dade Mayor Daniella Levine Cava, the county’s first Jewish mayor, also called on the community to “condemn this disturbing flyer.”

“My view is that there are people doing these things, you can’t normalize it. Throwing a flier on someone’s lawn is not far off from throwing a rock through someone’s window,” Gelber said. “My view is you have to meet outrageous behavior with outrage. It’s incumbent on us to not let hate sit there without a response.”

He added: “We intend to pursue any lawful response.”

But what could that entail?

Federally, hate crimes entail specific attacks or threats to certain groups of people. For example, in 2017, a Miami man was sentenced to 25 years in prison for planning to bomb an Aventura synagogue in a plot to target Jewish people.

Under state law, “hate crimes” are actually “enhancements” to existing state crimes, increasing penalties if the crimes are committed “with prejudice.” In recent years, the Miami-Dade State Attorney’s Office has filed such enhancements in a slew of cases, including those of a white doctor accused of attacking a Hispanic man, four men accused of attacking gay men after a South Beach gay pride parade and a Nazi-enthusiast accused of trying to burn down an apartment building to target Jews.

But the Goyim Defense League members are rarely charged with any hate-crime-related charges stemming from their public stunts.

In December, one Goyim Defense League supporter was charged with violating a municipal code in San Diego after, along with others, hanging a large anti-Semitic poster from a freeway overpass. The violation was tacked on to an unrelated charge of attacking his neighbor while screaming homophobic slurs.

Mostly, troubles with the law have stemmed from traffic infractions or low-level ordinances, said Hill, from the ADL. “We’ve seen people ticketed for littering,” she said.

A similar minor violation may well be a recourse in Miami Beach, which has an ordinance governing the distribution of fliers and promotional material, the type often seen littering the South Beach entertainment district. But to make a case, police and prosecutors — sans witnesses — would need to prove who actually did the littering, not just identify the car used.

Miami Beach won’t say if its considering a litter-type charge. But as detectives work the case, officers have nevertheless stepped up their presence.

“We have increased patrols in our neighborhoods and also at our religious institutions,” the department said in a tweet. “There is no place for hate in our community and it will not be tolerated.”