Truchanas with his daughter Rima in 1970, top; a handmade kayak, middle; and a treacherous place to set up camp. Pictures: Melva Truchanas 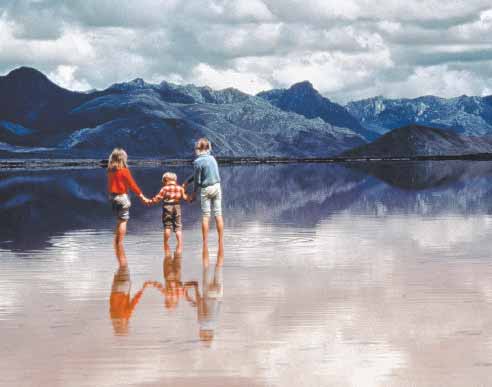 The epic nature of his adventures to the heart of the Tasmanian wilderness were as brave and heroic as any in the human history of exploring the unknown — ranking alongside the august achievements of Mawson in Antarctica and Armstrong on the moon.

And his motivation to test the limits of physical endurance and risk his life to photograph the wonder of what lies beyond reach of mere mortals so we may cherish nature at its wildest elevates his intrepid journeys beyond those of great explorers to the transcendent moral realm of the mythical gods of ancient Rome or Greece.

As if scripted from the heavens, the course of his life, including the fateful manner of his death, followed the plot of fables and folklore, where lessons in life are strewn like gems along a path.

Alas, for all his noble aims and achievements, the 50th anniversary of his passing a week ago, on January 6, went largely and sadly unnoticed by the general public.

Truchanas was born in 1923 in Lithuania, a tiny Baltic state flanked by Poland, Latvia and Belarus, and he fought with the resistance against its invasion by the Russians in 1940, the German Nazis in 1941 and the Russians again in 1945.

Nearly a third of his countrymen were killed or detained in concentration camps as the communists and fascists fought for control of his homeland. When it was handed on a platter to the communists and made part of the Soviet Union in the carveup after World War II he left, never to return.

Fleeing to West Germany, which was controlled by the Allies, he went to university in Munich and honed his skills as a mountaineer and photographer, practising his crafts in the Bavarian Alps, which had spawned a globally recognised tradition of epic mountain photography.

He migrated to Tasmania in 1948 and it was not long before his attention was drawn to the island’s South-West, one of the world’s most untamed wildernesses where the going was so rough even Aborigines, who had been on the island for 45,000 years and camped in caves in the area, were thought to have been only infrequent visitors, if at all, to some of the harshest South-West terrain.

Truchanas began exploring the region with his camera.

Entranced by the poetry and scale of the mountains, he would focus his lens on majestic peaks and set up camp while waiting hours for the sun to provide the perfect lighting for a dramatic scene.

His work was awesome, ever reaching to capture on film the intensity of his own reaction to life within this magnificent unmolested landscape that was forged in the ancient force of time immemorial and which had denied humanity’s industrial zeal for more than a century.

The contrast between this and the ruin of his homeland by warring politics is as stark as the peace he captures in the gales and sleet of flooded gorges and alpine thickets.

He found a newspaper record of a trip down the Gordon River in 1928 that spoke of great wonders in the area known as “The Splits”, and he became obsessed with trekking from Lake Pedder to the river’s upper reaches and kayaking to where it empties in the sea. No one had tried to do it before. The area was unmapped or poorly mapped at best, and many Tasmanians believed the Gordon flowed in part underground.

In 1954, he flew into Lake Pedder and set off with a special kayak he had designed and made, using a collapsible aluminium frame wrapped in canvas, that enabled him to carry it on his back when on foot. A few days into the journey, he catapulted over a 6m waterfall and lost his kayak and most possessions, except for a pack with his sleeping bag, camera, tent and a book.

He had lost his trousers in the dumping and was forced to fashion a make-do pair out of a jacket that enabled him to walk from the disaster with his life if not his dignity.

Three years later he completed the trip down the Gordon and arrived under makeshift sail in his kayak at Macquarie Harbour, where he astonished Strahan locals with his amazing feat. His trip helped update river maps and proved wrong the belief that the Gordon went underground.

On his many treks into the wilds, he always went alone.

Tragedy struck when the 1967 bushfires tore through Hobart and razed his home, destroying all his negatives.

His work of almost 20 years in the wilderness was lost in one fiery blaze.

Devastated, he set about doing it again, only this time not as a fit, strong, young, single, former resistance fighter at his physical peak in his 20s and 30s, but as a seasoned photographer, father and family man approaching 50.

Trekking feverishly in his spare time to retake his photos, in his day job he worked for the Hydro Electric Commission. The state-run company announced it was going to dam Lake Pedder and link it to the highland scheme generating power for the state.

Aghast at the plan, Truchanas began holding public slide shows around the state to make Tasmanians aware of what they were to lose. He narrated the shows but usually studiously avoided political statements in the hope his photographs would be worth their proverbial thousands of words.

But in 1971, while opening an art exhibition, he gave a speech from the heart: “We must try to retain as much as possible of what still remains of the unique, rare and beautiful. It is terribly important that we take interest in the future of our remaining wilderness, and in the future of our national parks. Is there any reason why, given this interest, and given enlightened leadership, the ideal of beauty could not become an accepted goal of national policy? Is there any reason why Tasmania should not be more beautiful on the day we leave it, than on the day we came? “If we can revise our attitudes towards the land under our feet; if we can accept a role of steward and depart from the role as conqueror; if we can accept the view that man and nature are inseparable parts of the unified whole, then Tasmania can be a shining beacon in a dull, uniform and largely artificial world.”

History shows Lake Pedder was inundated by the Hydro in 1972, a tragic loss, but also that a Truchanas print used in a national advertising campaign was central to saving the Gordon from being dammed in the early 1980s.

On January 6, 1972, Truchanas fell in the Gordon while taking photographs.

In the spirit of the legend that was his life, his body was found dead, wedged under a log, by Peter Dombrovskis, the now famous Tasmanian wilderness photographer who Truchanas had taken under his wing as mentor and, at least informally, adopted as his son.

Dombrovskis, a German migrant of Latvian parents, ran with the baton and took wilderness photography to new heights. In 1996, he too died in the wild, while focusing on the Western Arthur Range.