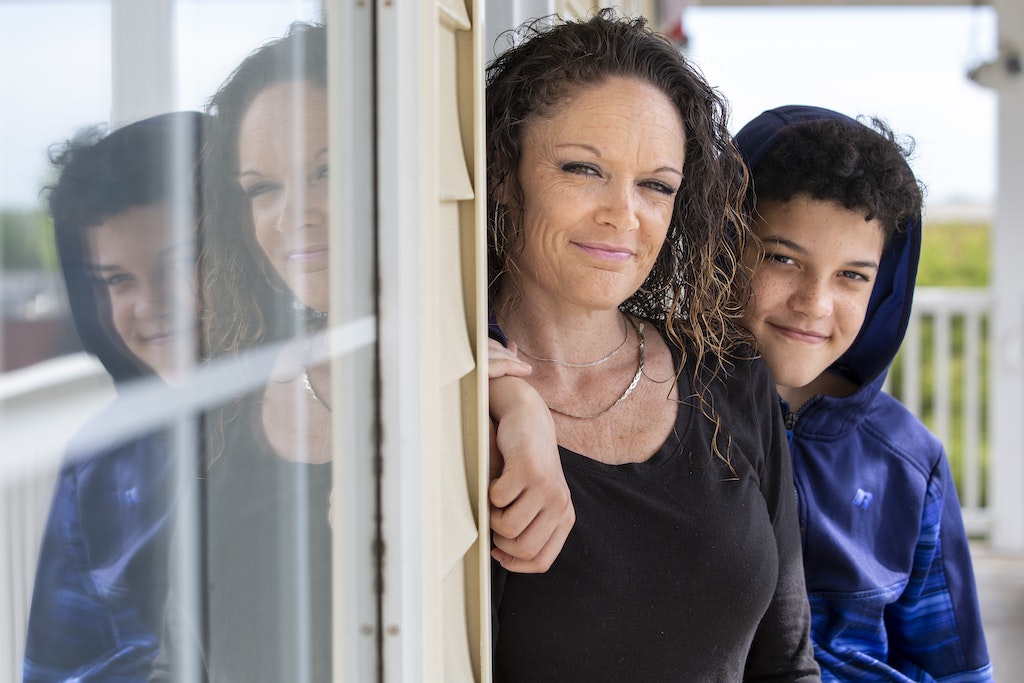 Mae Corwin (left) and her son Messiah Huff lost their home when Corwin was laid off from her bartending job, but lawyer Mark Melton was there to help. (Lynda M. Gonzalez/Staff Photographer)

Will I still have a roof over my head tomorrow?

The new coronavirus has made things that stark for North Texans. Jobless claims in the state soared 600% in one month as nonessential businesses closed and residents were ordered to shelter in place. Now the rent is due, and people aren’t sure whether they can pay — or avoid evictions.

Dallas attorney Mark Melton has started helping renters pro bono by answering questions on Facebook about the Supreme Court of Texas’ suspension of evictions. When it became too much work for one lawyer, he asked others for help.

Now, Melton, a tax attorney with Holland & Knight in Dallas, is leading nearly 60 lawyers who are offering free consultation to uncertain tenants.

“Everyone’s confused and scared to death,” he said. “They don’t have jobs, and rent is due. A lot of them are naturally very nervous about what’s going to happen to them.”

The lawyers in Melton’s group have various legal backgrounds. There are solo practitioners and in-house corporate attorneys. Some are also bilingual.

Dallas City Council member Jaime Resendez, who represents District 5 in southeastern Dallas, is one of the volunteers. He also has helped recruit other attorneys for the effort.

“A lot of people have lost their jobs, have taken a reduction in pay, and they’re understandably in fear,” he said. “This group of attorneys are interested in calming those fears and getting them to understand their rights.”

Melton and the other attorneys want people to know that an eviction notice doesn’t mean they’ll be on the streets.

The Supreme Court of Texas, the highest civil court in the state, suspended eviction hearings, with some exceptions, from March 19 through April 19. Dallas County’s moratorium on eviction hearings runs through May 18. Tarrant County’s is indefinite.

Tenants still have to pay rent if they receive an eviction notice. But during the moratorium, the eviction can’t be processed in court.

“It’s important for people to understand and know that they will not be thrown out of their homes or apartments, at this time,” Resendez said. “It’s just important for all of us — the business community, landlords and tenants — to work together to get through the time because COVID-19 is impacting every aspect of our life.”

Melton can relate to people’s struggles as they face eviction. He was kicked out of his home 20 years ago, he said, “because I was broke.”

And he said it has been “emotionally draining” hearing about people’s difficulties.

“You just hear stories of desperation and helplessness, and there’s only so much you can do,” Melton said. “And so you can kind of go through the day just watching all this pain, without being able to do a whole lot about it, but I can still do something, you know, and educate people on what the rights are so they’re not taken advantage of.”

One of the people reaching out for help was Mae Corwin.

She was laid off from her bartending job at Sneaky Pete’s on Lewisville Lake. Without a paycheck, she couldn’t afford her car or Oak Cliff apartment. She was evicted March 17, two days before the statewide moratorium. The single mother and her 13-year-old son, Messiah, were facing homelessness.

Melton called shelters across the area only to find they were full. To help with Corwin’s immediate needs, Melton paid for a week at an extended-stay hotel in East Dallas. He also bought them groceries and is checking in on them.

Melton said he can’t go to those extraordinary efforts for every family, but he saw a situation where he could help.

“It’s definitely a blessing for me.”

North Texans who need to consult a lawyer about evictions may email Dallas- Evictions2020@gmail.com.