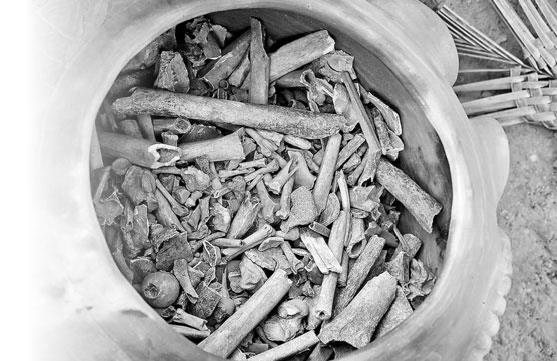 A close up view of bones inside an urn. 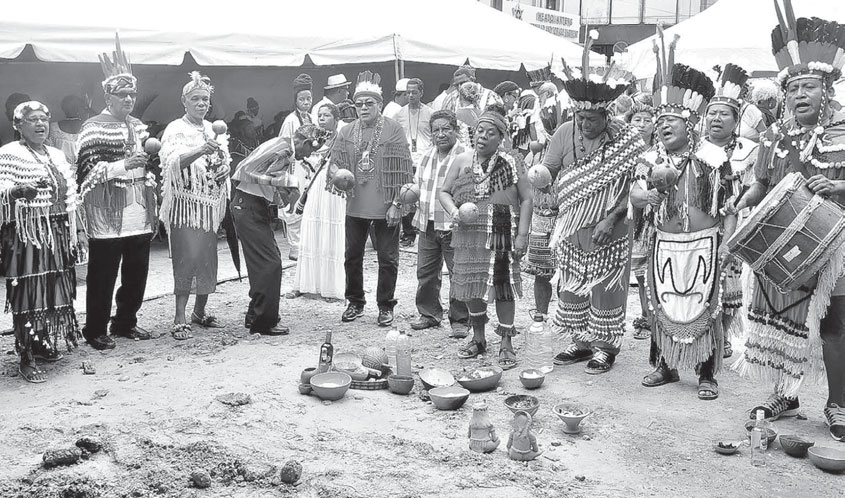 Members of the local and foreign indigenous peoples sing during the burial.
PICTURES EDISON BOODOOSINGH

Speaking at a re-internment ceremony for the remains of approximately 60 of the country’s First Peoples at Red House in Port-of-Spain, on Saturday, Chief of the Santa Rosa First Peoples Community Ricardo Bharath-Hernandez claimed that his members have been considering calling for the holiday after a one-off one was granted on October 14, 2017.

Bharath-Hernandez explained that his community was initially against an annual observance as they felt that there were already too many public holidays in T&T.

“We did not want a holiday for people to have leisure and not participate in the indigenous celebrations and observances,” Bharath-Hernandez said, as he claimed that his members’ perspective has slowly evolved.

Stating that the location, which serves as the home of the country’s Parliament, became sacred with the discovery of the remains during initial restoration work on the building, in 2013, Bharath-Hernandez called on Parliamentarians to continue to respect the rights of the country’s indigenous peoples going forward.

“You sit on the remains of our ancestors. Now they have awakened, we must always be conscious of how we treat with our indigenous peoples,”

He also sought to address detractors, whom he said claimed that Saturday’s ceremony was unimportant and insignificant.

“Just like most of us treat our dead with respect, and use the appropriate traditions, we feel very strongly that the remains of our ancestors should be respected and treated likewise,” Bharath-Hernandez said.

He also thanked the Government for honouring its commitment to facilitate the ceremony and erect a monument at the site.

“The re-internment of these human remains has provided a sense of peace, shelter, and security for the First Peoples. At the same time, it has opened a door of opportunity for our challenges and needs to be expressed,” Bharath-Hernandez said.

In her address at the ceremony, Minister of Community Development, Culture and the Arts Dr Nyan Gadsby-Dolly said that the ceremony was an important part of honouring the contribution made by the First Peoples to the development of T&T.

She noted that the site where the remains were found had been carefully excavated by a team of archaeologists.

“Respecting and honouring the traditions of our indigenous peoples is central to protecting and preserving our heritage as a people,” Gadsby-Dolly said.

Since restoration work on the Red House began in 2011, Parliament has been temporarily relocated to the International Waterfront Centre at Wrightson Road.

The work, which has cost an estimated $441 million, is expected to be completed later this year, with the building set to be officially reopened in January next year.