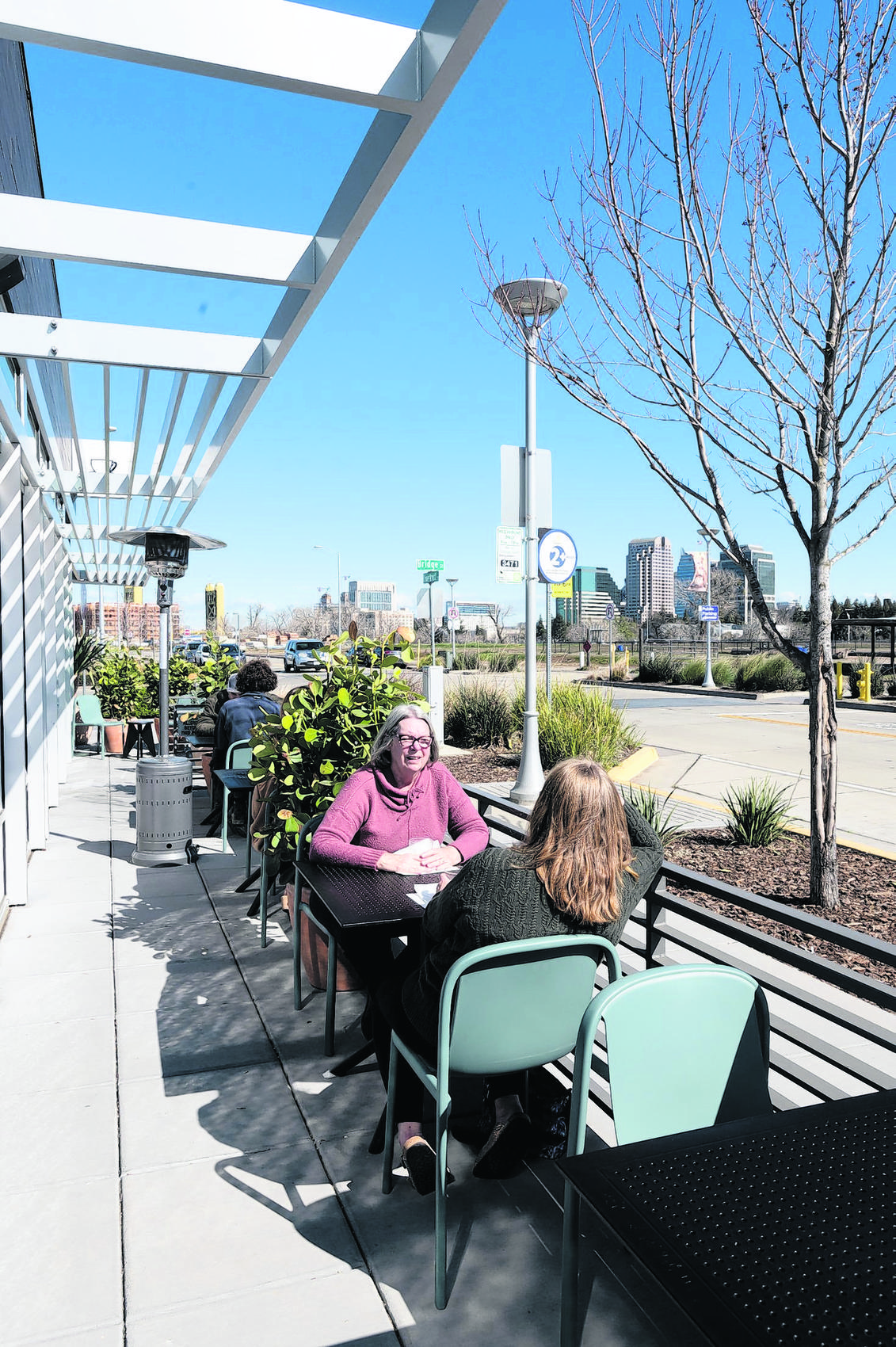 Karen Cecchi and Rachel Dutch sit outside Wednesday at Franquette, a new French-inspired wine bar and cafe in the West Sacramento’s developing Bridge District, as the downtown Sacramento skyline gleams from across the river. 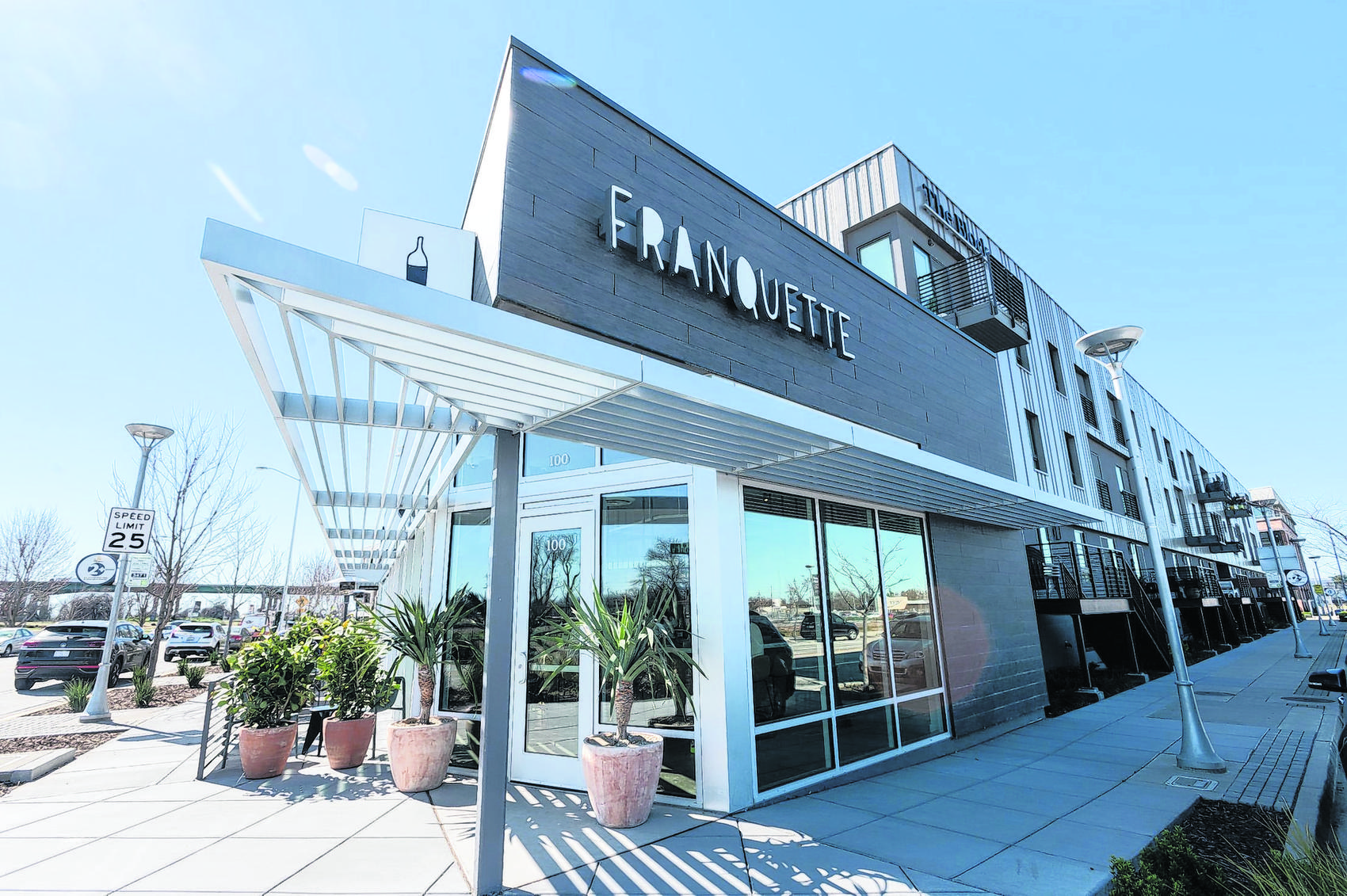 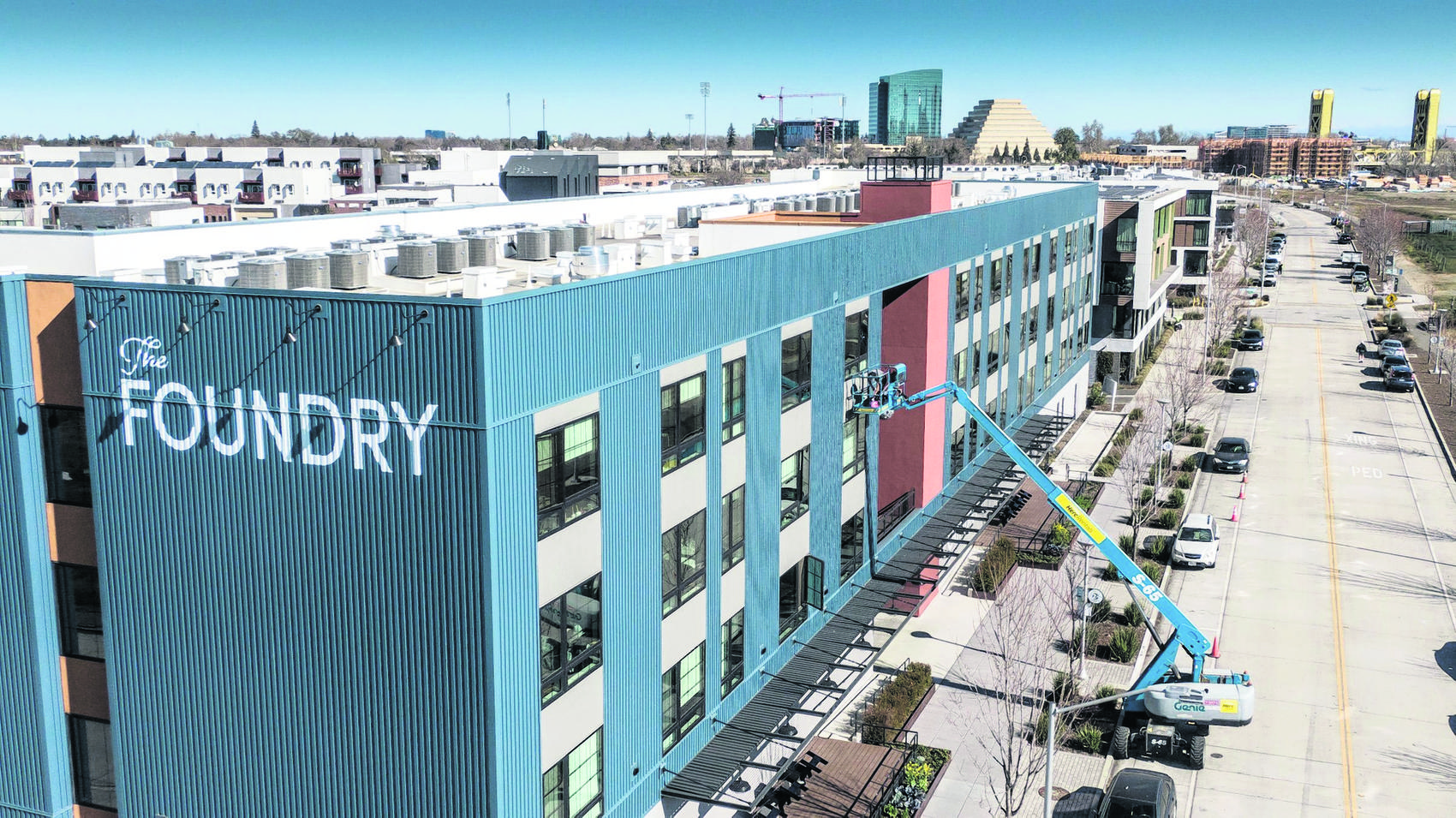 Work continues on The Foundry apartment complex along the Sacramento River in West Sacramento’s Bridge District on Wednesday. 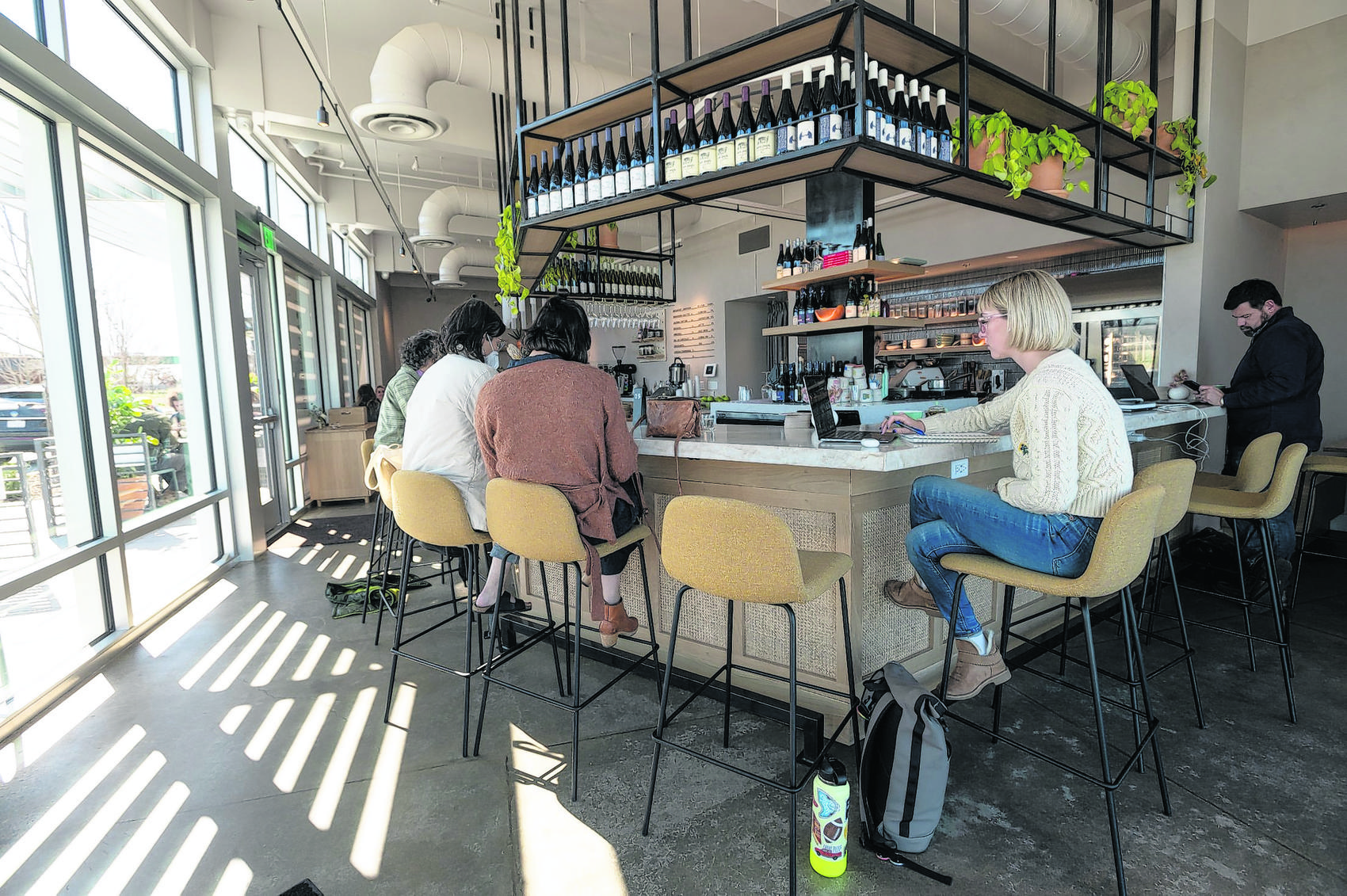 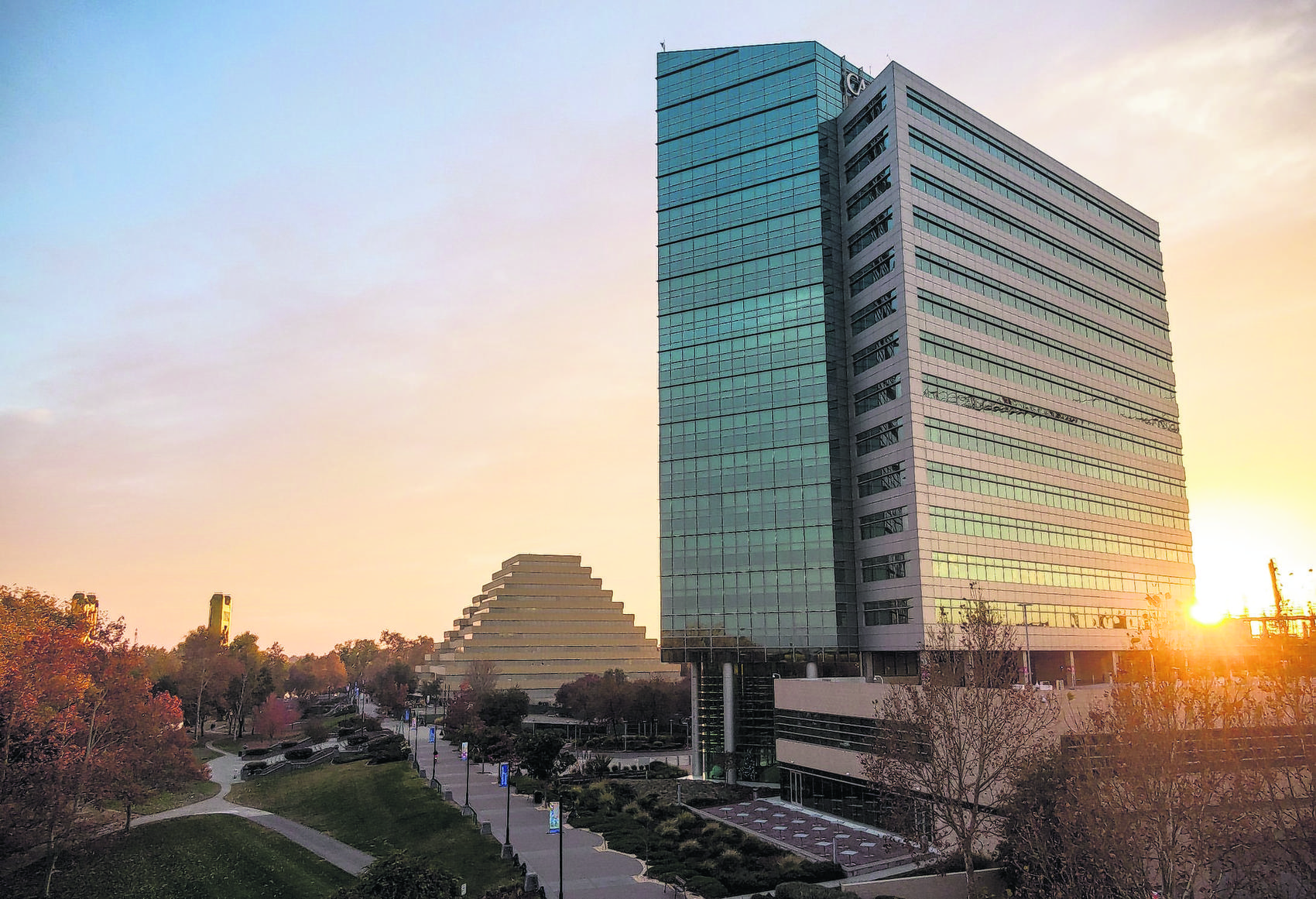 The California State Teachers Retirement System headquarters building, just north of the Bridge District along the Sacramento River in West Sacramento, is undergoing an expansion. 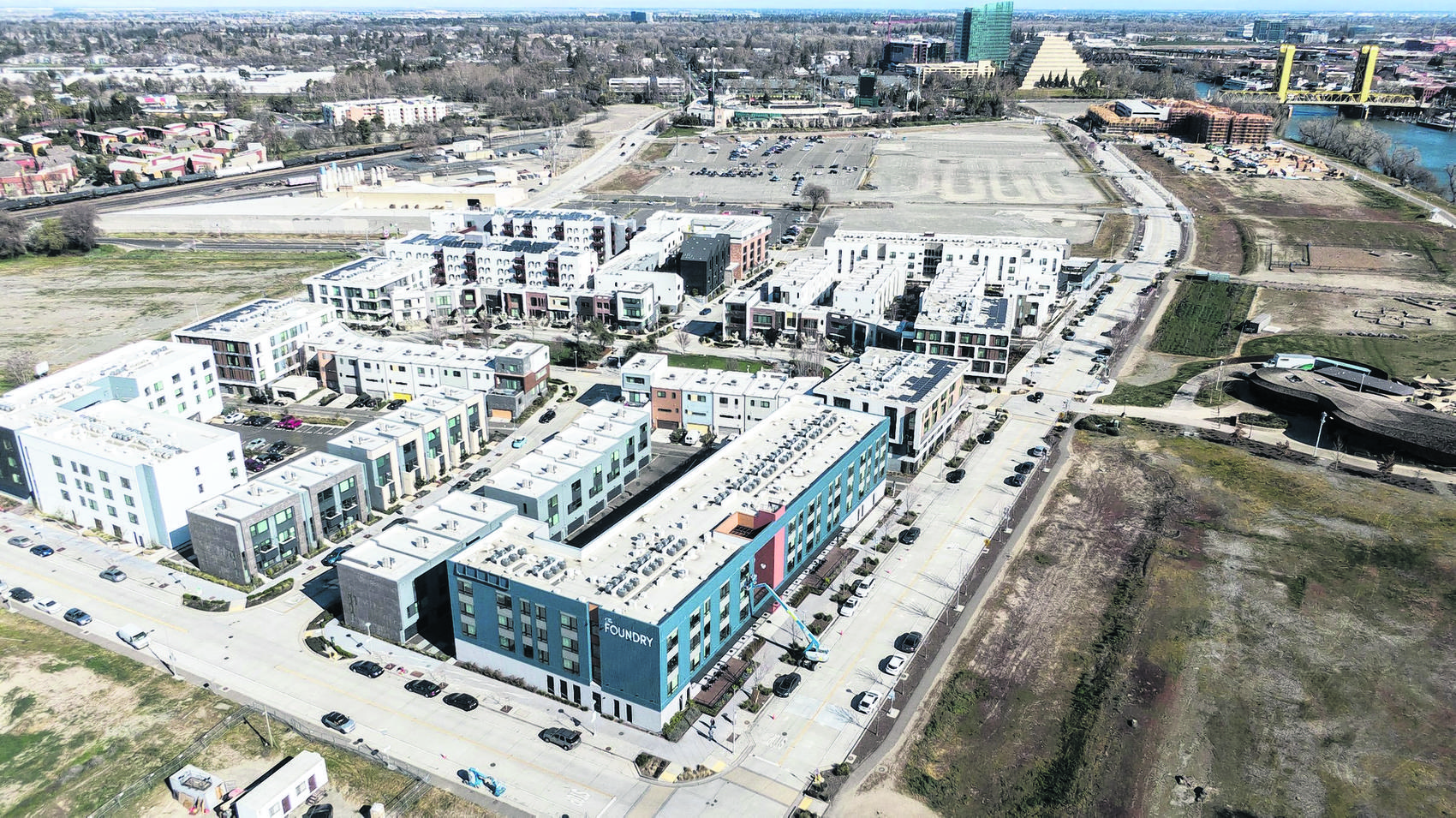 The Foundry apartment complex will soon have another neighbor as the West Apartments building rises to the north Wednesday in Bridge District, which also includes Sutter Health Park and Drake’s The Barn restaurant and beer garden.

It’s a warm Friday morning and the patio of a new French restaurant is full of diners. Joggers run by on their way to a river trail adorned with public art. In the distance, the sound of pounding hammers can be heard as yet another apartment building rises from the dirt.

This isn’t your parents’ West Sacramento.

The Sacramento region’s forgotten second city, a place formerly known more for its seedy hotels than its beer gardens, is experiencing a moment that is a generation in the making.

Hundreds of homes in modern apartment buildings have replaced rice mills and empty lots along the Sacramento River, with hundreds more about to be built. Construction crews are expected to break ground this summer on a building with 55 luxury apartments, a 200-room hotel and a rooftop bar next to Tower Bridge.

“There’s always been the promise of West Sacramento and what you’re seeing now is this,” City Councilman Chris Ledesma said as he walked along the riverfront trail last week. “The promise and the potential are being realized.”

It’s been a long process.

Developing the Sacramento Riverfront was one of the primary reasons West Sacramento incorporated as a city in 1987. Across the river, most of Sacramento is cut off from the river by Interstate 5, but a long stretch on the West Sacramento side has unblocked access. Yet it took more than 20 years for the progress to really take shape.

Tens of millions of dollars in public money were spent on streets and sewers. Warehouses and enormous rice silos were torn down, and a rail line that ran through the riverfront neighborhood was ripped out. Sutter Health Park, formerly Raley Field, opened in 2000 and stood mostly as an outpost for years.

“Before the last 10 years of development there were 20-plus years of planning, acquisition of properties, infrastructure that was put in and a lot of leaps of faith along the way,” West Sacramento City Manager Aaron Laurel said.

There were more colorful chapters as well. City leaders pitched the riverfront as a landing spot for a new Amazon headquarters, part of a regional proposal to attract the retail giant. In 2010, a lawsuit was filed to protect a large tree that city officials wanted to remove to build a pumping station for the area; the suit was settled and the tree was cut down.

Years later, more than 700 high-end townhomes and apartments have been built in a new neighborhood called the Bridge District, turning the blank canvas into the kind of live-play neighborhood city planners dream of. The district has approvals for roughly 5,000 residential units, plus offices, shopping and restaurants.

“The real question about West Sacramento shouldn’t be why is all this happening?” said developer Mark Friedman, “but why hasn’t it happened sooner?”

On the north side of Tower Bridge is the Washington District, the oldest neighborhood in West Sacramento where modest single family homes were built decades ago for residents who worked in the steamboat and shipping industries. It’s defined today largely by the 10-story pyramidal Ziggurat building, the CalSTRS skyscraper and the I Street Bridge.

In a few years, it will look much different.

Friedman’s Fulcrum development firm is building River One, the luxury condo and hotel building just north of Tower Bridge on an empty lot next to the Ziggurat. River One will have an outdoor bar and pool area overlooking the river and downtown Sacramento skyline, along with a restaurant led by the team behind Canon and Franquette.

Two blocks away, Fulcrum and Urban Elements are building the Kind Project, with 148 “attainable housing” units that will be capped at $1,300 monthly rent, Friedman said. Other affordable housing projects have been built close to the river. City leaders are sensitive to avoiding gentrification in a city where the per capita income is slightly below the region’s average and the poverty rate is slightly higher.

“Having affordable housing next to market rate makes the community richer and better,” Friedman said, “because of the diverse perspectives of the people living there.”

Also in the Washington District, Blackpine Communities is about to start building 106 single-family homes at Sixth and E streets, said Mike Paris, the company’s CEO and president. The company is also finalizing plans for another development a block away with 125 residences, a cafe, fitness center and dog park, Paris said.

Why the big bets on an aging neighborhood?

From Ikea to French wine

Cool was not generally a word associated with West Sacramento. For years, it was largely the functional smaller twin to the capital city; the United States Conference of Mayors named it the “Most Livable City in America” in 2014 among cities with fewer than 100,000 residents.

If you needed to go to Ikea or visit a nice park with the kids, West Sacramento was a fine option.

Now it’s where you go for French wine and cheese at Franquette or to sit beside a fire pit with a craft beer at the Barn, the oddly-shaped restaurant and beer garden that opened in 2016.

Building the Bridge District represents an expansion of the region’s urban core. The neighborhood is closer to Golden 1 Center than most of midtown Sacramento and is a short walk or scooter ride to the state Capitol.

The next big addition to the neighborhood will be WEST, a large apartment building facing the Sacramento River one block south of Tower Bridge. It will have more than 250 apartments and a retail space facing Sutter Health Park.

Farther south, closer to the Barn, Fulcrum is working on plans for a 275-unit luxury apartment building facing the river. That plan will also include a 50,000-square-foot office building that will house Fulcrum’s headquarters.

Drinking a glass of wine at Franquette last week, Friedman, who lived much of his childhood in West Sacramento, remarked to a friend how gratifying it has been to watch the city’s evolution.

“It’s so amazing to imagine what a place might be and how people might live in it,” he said later, “and then to come back many years later and see that it actually happened.”