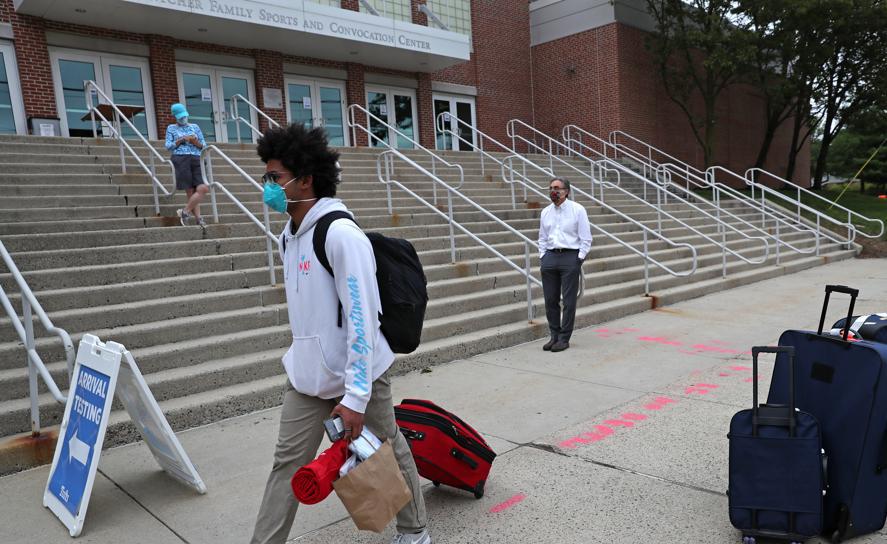 In August, arriving Tufts students were tested for coronavirus. Colleges are hoping for more of a typical return this fall.

College students have been among the most frequently tested in Massachusetts for COVID, but they may be among the last to get vaccinated against the illness.

Colleges and universities, a major economic engine in Massachusetts, are hoping to have enough students, faculty, and staff vaccinated by next August to resume normal campus life at the start of the school year. But how they will get there remains uncertain, relies heavily on state and federal guidance and potential mandates on vaccinations, and is likely to be chaotic, college officials said.

“There’s a lot of work to do,’’ said Martin Meehan, president of the University of Massachusetts system. “There’s so much uncertainty around the vaccines.’’

Colleges and universities were not given priority under Governor Charlie Baker’s massive public vaccination plan unveiled Dec. 9. The state has included most university students and workers in the third tier of its vaccine distribution plan along with the general public. The Phase 3 group, with an estimated 2.8 million Massachusetts residents, is expected to have access to the two-shot dose of the vaccine in April at the earliest. It is unclear whether students will be expected to get their shots where they go to college and whether universities will receive vaccine doses to distribute to their students and employees, much like they handled their own virus testing programs.

Universities said they are trying to identify members of their communities who may qualify for vaccinations in the first and second groups, including clinical and non-clinical health care workers who are dealing directly with COVID patients; campus police; and those providing emergency or medical services on campus. Faculty and staff who are 65 and older and students with conditions that put them at higher risk of serious illness or complications from COVID-19 also could be vaccinated earlier.

With a mostly young and healthy student population and a limited supply of vaccine doses, governors have not made special accommodations for vaccinating college students.

In Massachusetts, the first to be vaccinated are front-line health workers, senior care residents, public safety employees, home-based caregivers and other health workers, and residents of congregate settings such as prisons and homeless shelters. The state anticipates their vaccinations will be completed by February.

If the state can obtain additional supplies, Massachusetts would move on to inoculating residents with two or more chronic health conditions, critical workers such as teachers, transit employees, food and sanitation workers, adults 65 and over, and residents with a single serious illness.

Other states have similar distribution plans and most assume that college students, faculty, and staff will get vaccinated at the same time as the general public, said Chris Marsicano, an assistant professor at Davidson College in North Carolina and founding director of the College Crisis Initiative, which has been tracking higher education’s response to the pandemic.

If colleges are able to receive their own vaccine supply to distribute, it would likely happen during that final phase from April to June and there could be lobbying in the coming months from various higher education trade groups, Marsicano said, as schools jockey to be first in line.

For example, many community colleges have been hit hard by the pandemic and many of their students are parents of school-age children, or work in the service sector. The sooner these students are vaccinated, the sooner the local economy will be up and running, Marsicano said.

For the fall semester, many colleges tried to curb the spread of COVID-19 and keep their students, faculty, and neighbors safe by testing students at least once a week. But some campuses didn’t have access to laboratories, couldn’t afford extensive testing programs, or were in states where large-scale testing was not a priority.

Outside New England, many large public schools have done little testing and have struggled to keep infection rates down on campuses. That could spur lawmakers and public health officials in those states to give these institutions priority access to the vaccines to prevent the virus from spreading, penalizing private colleges that spent millions on testing programs that reduced coronavirus cases, Marsicano said.

“This vaccine issue is going to be another source of cleavage and division in the higher education lobbying,’’ he said. “Vaccine distribution could be more chaotic than testing.’’

Meanwhile, institutions around Massachusetts are beginning to pivot their planning efforts from testing to vaccinations.

Northeastern University has two teams looking for potential vaccine sources, one focused on the government and the other on the private sector, said spokeswoman Renata Nyul.

Tufts University has begun talks with local and state authorities about what role the university could play in the distribution of a COVID-19 vaccine, said spokesman Patrick Collins.

UMass is also looking at whether some campus facilities could be used to help vaccinate the wider community and may launch an education campaign to urge people to get vaccinations, Meehan said.

Many colleges across the country also are taking stock of whether they have the appropriate cold storage facilities, security, and health care staff to carry out vaccinations, if they are called on to play a role, said Gerri Taylor, a member of the American College Health Association’s COVID-19 task force and a retired director of Bentley University’s health center.

Boston-area colleges said they are also consulting with their legal teams about whether they can require students and employees on campus to be vaccinated. But many are hoping that the state will mandate the vaccine.

If COVID vaccines are available to colleges to distribute to students in late spring before they return home, states will have to make sure their immunization registries are updated and accessible by health officials in other states, Taylor said.

While the availability of a vaccine is unlikely to help colleges or their budgets for this academic year, many are hopeful that it will help reduce their losses next year.

In December, the credit rating agency Moody’s Investors Service projected that higher education revenue will decline by 5 percent to 10 percent over the next year as universities grapple with pandemic-related shocks, including the losses from lower enrollment and empty dorm rooms.

Many colleges nationwide have laid off or furloughed employees and are looking to eliminate long-running but low-enrollment academic majors and reduce protected tenured faculty. Some colleges also are looking to merge with financially stronger partners to survive.

The vaccine offers a path back to economic stability for many campuses, college officials said.

“We are all trying to get up and running as soon as possible, and do it competently,’’ Meehan said.