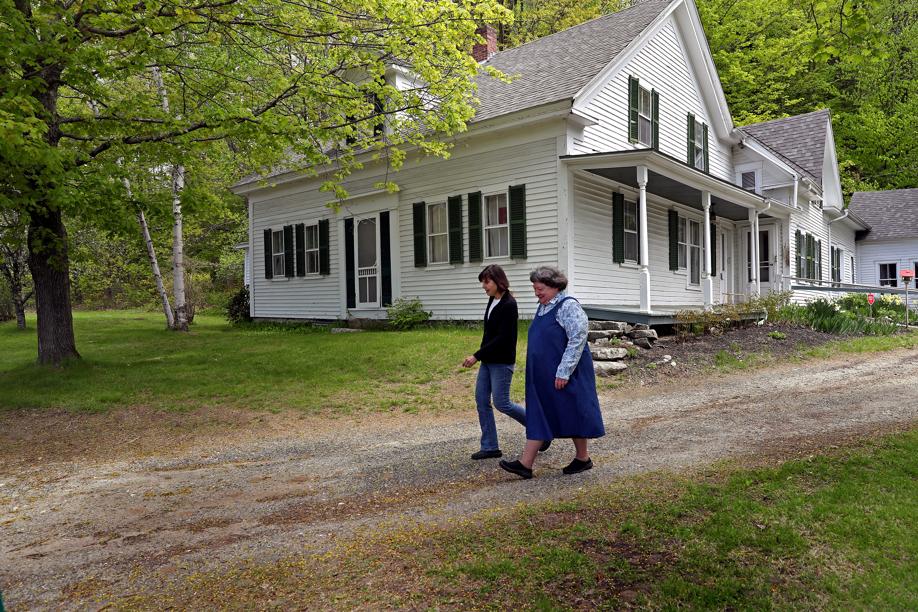 Lynne Monroe and Mary Lyn Ray walked outside the home of Donald Hall (below) and Jane Kenyon. 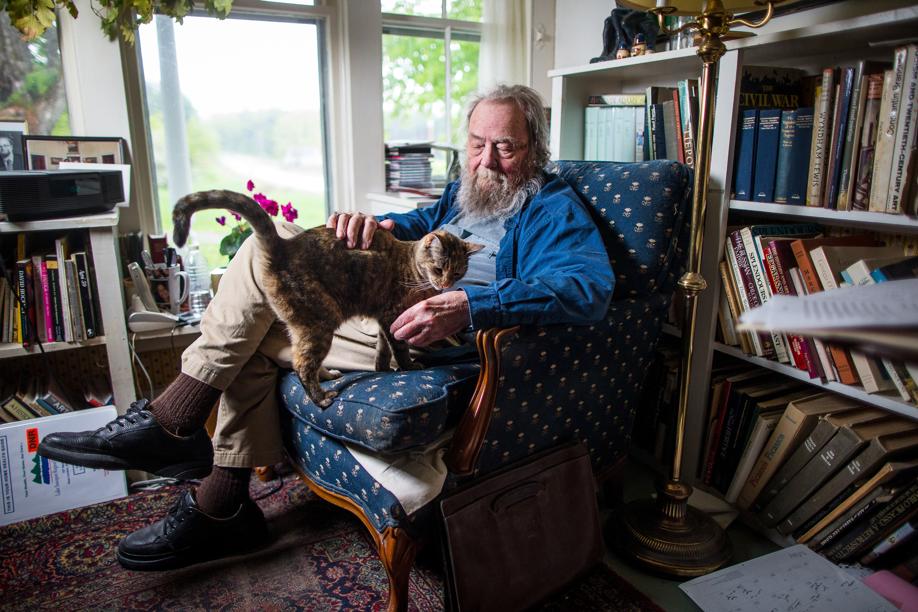 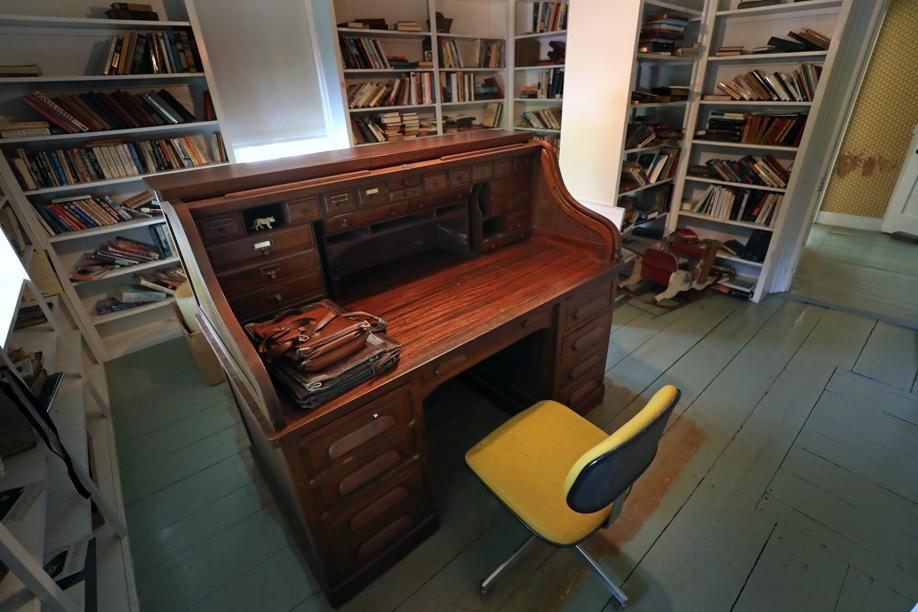 Donald Hall’s rolltop writing desk was among the items bought to keep in the house.

WILMOT, N.H. — When the late US poet laureate Donald Hall moved from Michigan to his family’s white farmhouse in 1975, he wrote that, “For me, it was coming home, and it was coming home to the place of language.’’

For the next 43 years, until his death in 2018, at age 89, Hall found a portal to history, memory, and New England’s agrarian past in the oil lamps, horseshoes, iron skillets, and stuffed parlor chairs cluttered in the back rooms of the house, and in the windows looking out on the “blue ghost’’ of Mount Kearsarge and the pale yellow poplars ringing Eagle Pond.

The house and its rural setting also inspired Hall’s wife, the poet Jane Kenyon, who died of leukemia in the farmhouse in 1995.

So when neighbors heard last month that Eagle Pond Farm was being put on the market, and its furniture, books, and art dispersed through two auctions and an estate sale, they knew they had to act quickly to save the foundational domain of two of America’s great poets.

“We have an emergency,’’ Mary Lyn Ray, a children’s book author from nearby South Danbury and longtime friend of the couple, said in a panicked phone call to her friend, Lynne Munroe. “What are we going to do?’’

What they did was form “The Don and Jane Project,’’ a hastily organized group of friends, neighbors, and fans of Hall and Kenyon.

Racing to rescue the home from buyers who might not understand its history, the group pooled its resources to buy the farm and secure some of its most significant items — among them, Hall’s rolltop writing desk, and the cottage pine bed where Kenyon died, plunging Hall into the grief that suffuses the poem he wrote about her passing, “The Painted Bed.’’

Munroe, a historical preservation consultant, said she and her husband, Frank Whittemore, used their retirement savings to buy the property and 160 acres of surrounding land with a cash offer of $395,000.

“The whole attitude we’ve had toward the house is we have to pay what we have to pay, and we’ll figure it out later,’’ Munroe said, sitting in the living room with Ray on a recent morning. “We’re not going to have another chance.’’

Munroe and Ray want to designate the farm as a National Historic Landmark and convert it into a nonprofit museum or writers’ retreat. They acknowledge many unanswered questions about how such a retreat would be structured and financed to ensure that it becomes an enduring link honoring the legacies of Hall and Kenyon.

“What do we leave, what do we mend, or patch, or alter?’’ Ray said. “How do we keep a true sense and representation of the surroundings of their lives?’’

Hall’s great-grandfather bought the house in 1865. At 12 or 13, Hall wrote his first poems on the farm during one of the idyllic summers he spent here as a boy, feeding chickens, haying, and listening to his grandfather tell stories as he milked cows in the barn.

By writing about the grosbeaks and chickadees snapping seeds from the bird feeder, the neighbors gossiping in the general store about the latest divorce, and the hard winter snowfall on the saphouse, Hall helped cement rural New Hampshire’s place in the literary firmament.

In 2010, he was a recipient of the National Medal of Arts from President Obama.

Paul Muldoon, who published Hall’s work as poetry editor of The New Yorker, commented on Hall’s impact by recalling an Oscar Wilde quote about the English landscape painter J.M.W. Turner: “Before Turner there was no fog in London.’’

“I would extend that to say there is no New Hampshire before Robert Frost and before Donald Hall,’’ Muldoon said.

“Eagle Pond, and its terrain, is no less fruitful a tract than Ithaca,’’ Muldoon added, comparing Hall’s farmhouse on Route 4, 30 miles northwest of Concord, to the island home of the Greek hero Odysseus. “So much great art is local, it’s very specific, and I think that’s part of the attraction here.’’

Although he was a revered man of letters, educated at Harvard and Oxford, Hall hated pretension. He umpired town softball games, read frequently at elementary schools and church fairs, corresponded with admirers, and cherished nothing more than a blueberry bagel and a strong cup of coffee in the morning.

He also wrote wickedly funny essays such as “I (heart) My Dish,’’ a full-throated homage to his satellite TV dish, which allowed him to watch his beloved Red Sox, as well as an endless stream of basketball, hockey, tennis, ping-pong, badminton, and wrestling.

Like any good New Hampshirite, he loved to bash Vermont, writing in “Reasons for Hating Vermont,’’ that, “In Vermont when inchling trout are released into streams, a state law requires that they be preboned and stuffed with wild rice delicately flavored with garlic and thyme.’’

Kenyon’s connection to the farm was also profound, although more fraught.

When she moved to the house, surrounded by daguerreotypes of Hall’s relatives, she said, “I felt quite disembodied for a while.’’

“When we came here, of course, this house is so thoroughly full of Don’s family, his ancestors, their belongings, their reverberations, that I, at times, felt almost annihilated by the otherness of it,’’ she told Bill Moyers for a PBS special filmed on the farm in 1993.

That sense of dislocation informed Kenyon’s poem, “From Room to Room,’’ in which she wrote, “I am clumsy here, thrusting slabs of maple into the stove. Out of my body for a while, weightless in space. . . . ’’

Hall died believing his granddaughter would move into the farm, an idea that delighted him because the property would remain in the family for another generation.

But when his granddaughter’s life circumstances changed, making her move impossible, Hall’s children decided to sell the farm and much of its contents. Attempts to reach the family were not successful.

Ray and Munroe drew up lists of the items they wanted to save — ranging from a Warhol lithograph of Elizabeth Taylor to Kenyon’s pocket Oxford English dictionary — and enlisted friends to buy them at auction.

Ray spent all night in her car parked outside the house so she could be first in line to buy Hall’s favorite blue armchair at the estate sale last month. She got it for $500.

But now that the farm is going to be infused with new life, and appreciated by a new generation of lovers of literature or emerging writers and scholars, Ray’s feelings have shifted.

As she has watched donations pour into “The Don and Jane Project’’ from friends and strangers, and heard stories about the couple from truckers and rock stars alike, she said, “The family of the farm is growing, rather than the farm leaving the family.’’