Two men, a slap, and the hypocrisy of us all
At the Oscars, in the midst of a slap, we missed the deep pain of how we ignore a certain kind of violence. 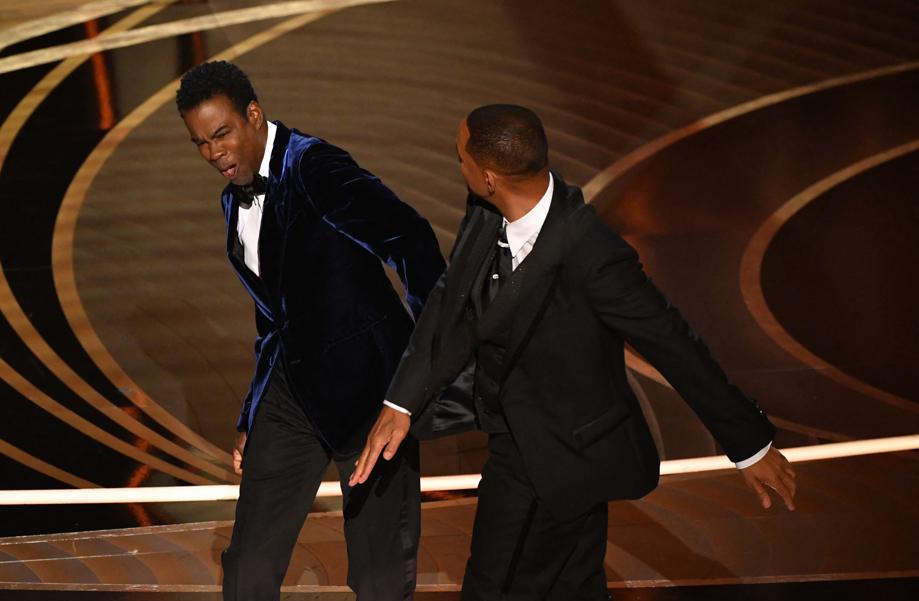 Violence, and how we define it, is a bit astounding.

It’s always only the obvious: weapons and war and physical force. Violence is a slap on Hollywood’s most sacred stage.

It is never the ways in which we can tear people down. It is rarely recognized as racism, sexism, xenophobia, classism, ableism, anti-queer, or oppression of any kind.

Violence is only valued in the context of where, when, and who in this nation.

We have sympathy when we see bloodied and brutalized white people in Ukraine, but we overlook the destruction in Haiti, in Mexico.

Over and over, folk will say our generation, our era, has not seen war on our homeland, as if Black neighborhoods have not been ravaged by police and blocks have not been bombed and set aflame by white folk and government alike.

Crack ravaged communities of color and was criminalized in the 1980s. But becausethe opioid epidemic’s victims are predominately white, the narrative is nowabout rehabilitation and help? This, too, is violence.

We care about the missing girls when they are white or in proximity to whiteness, but Black girls and women remain invisible before they ever disappear.

So it comes as no shock that we have trouble understanding the harm done to Jada Pinkett Smith by Chris Rock on Sunday night. Will Smith was wrong, and he apologized. Rock also has one to give.

It was easy for a nation to shame Kanye West for interrupting Taylor Swift and hurting her feelings by crudely stealing the mic and her moment and aggressively declaring the truth: Beyoncé had the best video.

It is harder for them to understand a Black woman’s pain. How hard has it been for an actress, a Hollywood beauty, to quietly fight the hurt of losing her hair to alopecia? What does it mean that it took her daughter’s loving nudge and Pinkett Smith nearing her 50th birthday to embrace bald as beautiful last summer? We look away from the harm caused by jokes about her looks in front of an industry that cherishes a certain kind of beauty.

How a Black woman’s hair grows or does not grow out of her head has been a consistent battle in this country. So much so, we’ve had to legislate protection against hair discrimination. The Crown Act passed in the House just over a week ago. It is a specific kind of violence that debases you on the basis of your hair texture and how you wear it while simultaneously celebrating white women for trying on your styles.

It is also complicated for folk to grasp what it felt like for Jada in 2016. She joined the #OscarsSoWhite movement calling for diversity and boycotted the show. Rock hosted. And a Black man, in front of a largely white audience, where every acting nominee was white, called her irrelevant and declared it was a party she wasn’t invited to anyways.

Humiliating a Black woman fighting for equity is not a ha-ha moment. Making fun of a Black woman a week after we watched the ambushing of Ketanji Brown Jackson, coming from the man who produced a documentary, “Good Hair,’’ examining the ways in which a Black woman sees her hair, is bad humor.

So often, in every space, Black women are expected to smile and take the disrespect in favor of everyone else. Abused, underpaid, and violated while beingasked to put democracy on our shoulders.

Beyoncé opened the show from a Compton tennis court surrounded by Black girls in beads and, eventually, her daughter dancing in front of her. She sang “Be Alive’’ with lines like I got a million miles on me, they want to see how far I’ll go. The path was never paved with gold, we worked and built this on our own. It wasn’t just for Venus and Serena. It was for Black women, for Black lives.

Black folk, and folk of color, are so often made to feel as though their pain does not count. Grin and bear it. Suck it up. Shake it off. It’s only a joke.I know how often I’ve had to do it.

You swallow the pain again and again until it feels as though you might choke.

Few of us can fathom what it is like to be as wealthy as Will Smith and Jada Pinkett Smith. Yet few of us know what it is to be on the receiving end of massive jokes for years, to have your children and your marriage made a mockery of and meme’d. And few of us know what it’s like to be the butt of jokes from someone who knows what fighting words are when he utters them and be expected to laugh it off.

For Will Smith, on the biggest night of his career, coming out of a contentious chapter in his marriage, to watch his wife be disgraced over the hair her disease attacks? Smiles pinch your spirit when your mouth is twisting up to hide the pain. It doesn’t make the slap justified nor does it make Rock right.

It’s all toxic. The humor. The slap. Hollywood.

Since Oscar night, there’s been so much yelling over who was right and wrong. There is no winning side. What I know: Jada Pinkett Smithwas wronged.

Now people are calling for Smith’s arrest, for his award to be taken away, comparing him to killers and war criminals. They claim he made all Black people look bad. Racism always finds a way.

“He could have killed him,’’ Judd Apatow tweeted overzealously and deleted. Murder? An open palm slap? Folk cheer for worse on basketball courts and football fields. Had it been on the big screen, it would have been called riveting.

Apatow once backed Lena Dunham when she defended Murray Miller against rape allegations by a Black woman. Again, what constitutes violence in America is who the victims are.

Similarly, grace and second chances depend on the who. Every single time. And if Black people are involved, politics will enter the chat.

Much like white folk acted as if Janet Jackson’s nipple was going to eat their children, there are now some claiming Smith’s smack was bad for their kids. There is more violence on cartoons and in superhero movies. There is more violence in the economic disparity of whose schools get funded, which students are over-punished, and the perfection we demand of certain folks.

A more gratuitous violence is teaching a whitewashed history of America so that white kids’ feelings aren’t hurt while everyone else’s reality is erased. These arguments often come down to protecting someone’s comfort, don’t they?

Comedians want to be rooted in freedom of speech and a good time. I get it. But at what cost and who is paying for it?

As we talk about Rock, Smith, harmless jokes, and what protecting Black women does and does not look like — don’t forget about Dave Chappelle. Stop closing your eyes to the trans folk his stand-up targets.

Even geniuses like Rock, Chappelle, and Smith, whom we admire, get it wrong sometimes.

Trans women of color, mostly Black, are being murdered for being who they are. For all the talk we do about stopping hate — we continue to deny this truth: The epidemic of violence against Black transgender women and trans women of color is real. Chappelle, in his effort to talk about white privilege in queer communities, erases that violence. Laughter cannot silence that pain.

Comedy is comedy. And free speech is a real thing. But like Wendy Rene sang, “After laughter comes tears.’’

There is a way in which jokes can be wielded as weaponry, a slap across the face, and we all seem to wrestle with when we’ll acknowledge the sting.