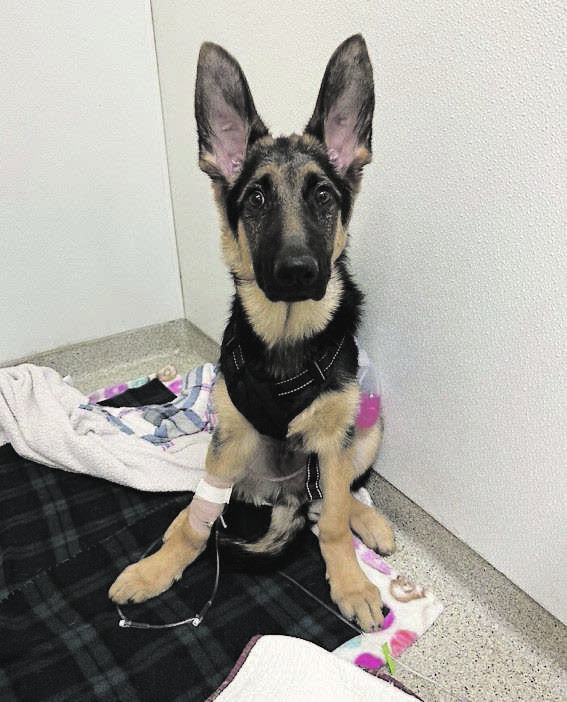 The German shepherd named Jaxx was taken to the animal hospital in May after apparently swallowing a wooden skewer, which pierced internal organs. He underwent the $10,000 procedure after being surrendered to another owner and is recovering well, the hospital said. 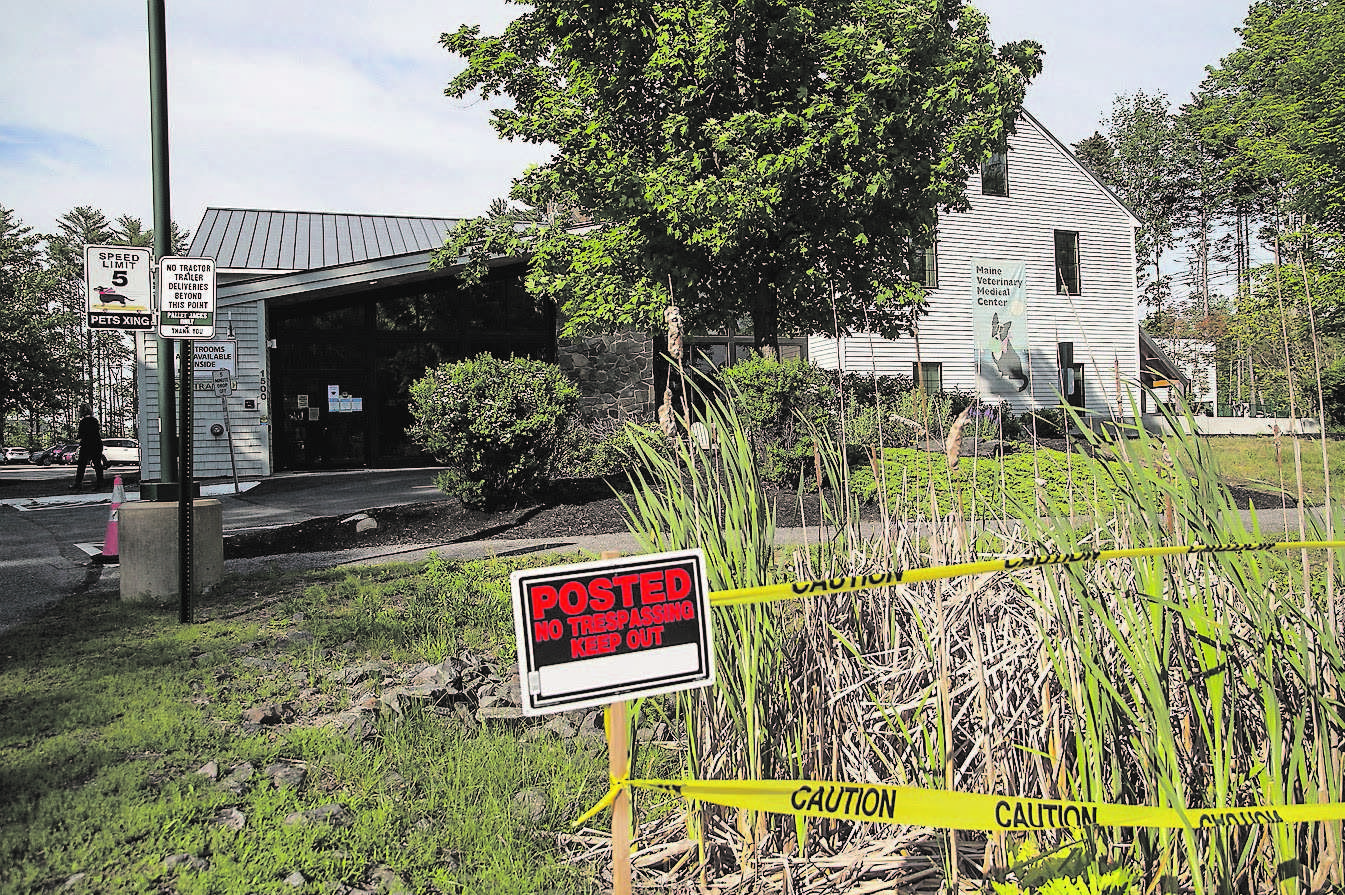 Derek Davis/Staff Photographer Maine Veterinary Medical Center in Scarborough has taken steps to ensure the safety of its staff after receiving hundreds of threatening emails and voicemails, including having a police cruiser on site. 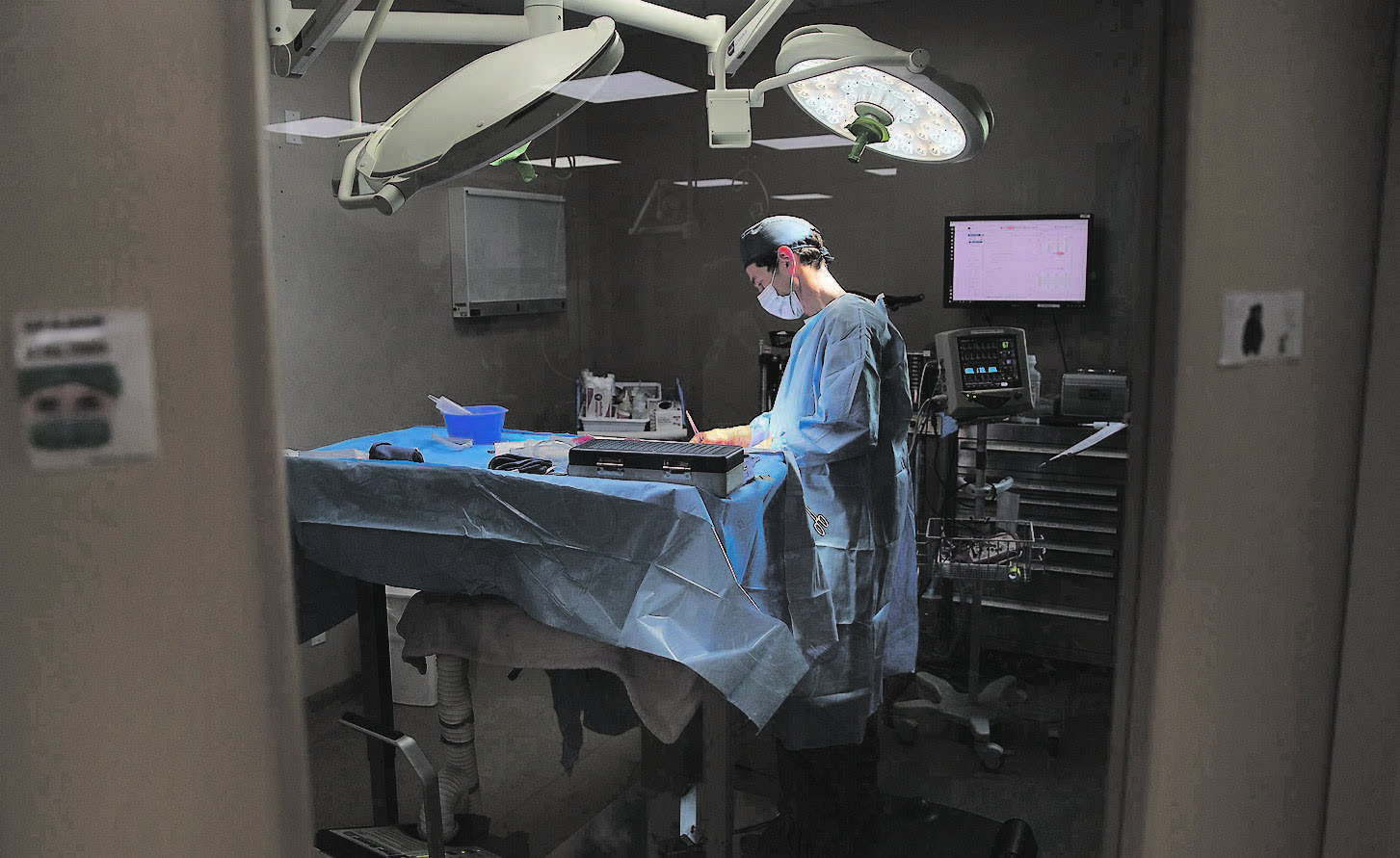 Derek Davis/Staff Photographer Dr. Ezra Steinberg operates on a canine patient at Maine Veterinary Medical Center in Scarborough on Monday. The hospital has received hundreds of threatening voicemails and emails after a woman who couldn’t afford emergency surgery agreed to surrender her dog to someone who could. The owner told a TV news reporter she called back hours later having raised the money, but was told she couldn’t get the dog back. The hospital disputes this claim.

NEXT IMAGE
Threats flood animal hospital over story of surrendered dog
The puppy is recovering from surgery but its owner couldn’t afford the bill. Now her dog is with new owners and the vets who saved him are receiving death threats.
By HANNAH LaCLAIRE Staff Writer

A veterinary hospital in Scarborough says it has been inundated with thousands of angry and threatening messages after a news story went viral about a customer who surrendered her injured puppy to the facility to save it because she couldn’t afford the $10,000 bill.

The story, which has ended poorly for both the pet owner and the puppy’s doctors, offers yet another example of how quickly social media outrage can grow, especially around controversies involving beloved animals.

The puppy, a purebred German shepherd named Jaxx, was taken to Maine Veterinary Medical Center in May after apparently swallowing a long wooden skewer. It had pierced internal organs from ribcage to colon, according to Sarah Mills, director of marketing and communications for the animal hospital.

By the time he was brought in to the hospital roughly one or two days later, he was feverish, in pain and septic, Mills said.

He needed emergency surgery, she said, but the pet owner didn’t have the $10,000 needed to cover of the cost of the surgery.

Unable to get a bank loan, the owner elected to surrender the puppy to save him from being euthanized.

He was quickly placed in a new home with a family that paid for the surgery, and is recovering, Mills said.

The original owner, whose identity could not be independently confirmed by the Press Herald, later contacted local TV news station WGME CBS 13 with her story. The owner told the station that she had called the veterinary hospital just a few hours later, having raised enough money to pay for his surgery, but that she was told the surrender was final and Jaxx was gone.

The pet hospital initially chose not to comment, Mills said, in an attempt to preserve the privacy of the pet owner, who she knew had experienced a traumatic few days.

The story was later picked up by Newsweek and other outlets and spread across social media. Maine Veterinary was unprepared for the backlash that followed.

The veterinary hospital has received hundreds of threatening, violent and expletive-laden voicemails and emails that Mills said have threatened to kill staff and their families and burn down the building.

People used the hospital’s “meet our team” tab on the website to find the names of staff, look them up on social media and threaten them there. She called the situation “very, very scary.”

The hospital received more than 3,000 calls on Wednesday alone, and ultimately staff had to turn off the phones because they were ringing nonstop, Mills said. Every call coming in was a threat.

With the phones off, staff had to go through voicemail messages all day to see if anyone was calling with a real emergency.

Negative reviews flooded the hospital’s Google ratings, and the search engine temporarily listed the hospital as a “casket service” rather than the usual “emergency veterinarian service.”

The phones were back on as of Monday, but Mills said the calls and emails hadn’t stopped. Business has slowed down considerably.

On a typical Monday morning, there might be around 30 patients, she said. This Monday, there were only four.

“We’ve never dealt with anything like this before,” Mills said.

The hospital is talking to its lawyers about whether to press charges against any of the people who’ve made threats. A police cruiser has been on site around the clock, she said.

The hospital hired the Knight Canney Group, a local public relations agency, to help tell its side of the story and fend off what agency president Felicia Knight called “a torrent of hate and meanness and threats.”

In a statement over the weekend, Maine Veterinary criticized those who made threats as well as the original WGME story, which it says left out important details.

“We had no idea the story would so malign not only our hospital and our caring doctors and staff, but by extension, our profession,” the statement reads.

According to the hospital, Jaxx was brought in on May 26 and was left overnight, his condition worsening while his owner tried to get the money together. Staff called her every hour or two seeking an update and didn’t get a final answer until after 4 p.m. the next day, it said.

The pet owner then told staff she couldn’t get the money together and was “prepared to say goodbye,” the statement reads. It was then that the doctor suggested she could surrender the puppy to another owner who would be willing to pay for the surgery.

“The owner, understandably distraught, told the doctor, ‘If you guys can give him a life and it’s not with me, then that’s fine,’” Maine Veterinary said in its statement.

The owner told WGME that she had started a Go- FundMe page and that with the help of friends, family and the dog’s breeder, she was able to come up with the money just a few hours after she surrendered Jaxx.

That’s when she called the hospital and said she had the money and wanted to get her dog back.

“She said (Maine Veterinary) told her Jaxx was gone and she couldn’t get him back,” the station reported.

The hospital disputes this claim.

It said the surgery’s estimated cost was $10,000, and that hospital policy requires half of that up front.

It doesn’t offer payment plans but does accept pet insurance, all major credit cards, or various credit services offered at the hospital.

The pet owner only qualified for about $2,000 through one onsite credit service and did not apply for the others, electing instead to try to get a bank loan, the hospital said.

While it’s true the pet owner created a GoFund- Me page, the hospital wrote in its statement, the page was shut down after raising only $100. The Press Herald couldn’t find a record of the GoFundMe page.

The pet owner did pay around $3,000 for Jaxx’s initial medications and tests, and the new owner picked up the balance of the $10,000 cost of the dog’s care, the hospital said.

Knight, with the public relations firm, criticized the WGME story for implying that the dog was “gone” rather than having been adopted by a new family that was able to pay for his surgery.

Knight and Mills insist the doctors did everything according to the book.

“There was nothing nefarious,” Knight said. “They wanted to save the dog. The dog has been placed with a very responsible owner who paid for the surgery.

It’s good for the dog, but it’s very sad the (original) owner had to surrender (Jaxx).”

It’s extremely rare for the hospital to resort to allowing a pet owner to surrender their animal, Mills said.

“It’s not something we ever want to do,” she said.

“The No. 1 goal here was just to keep the dog alive, but we never want to separate an animal from their family.”

Not One More Vet, a national nonprofit dedicated to ending the high prevalence of suicide within the veterinary industry, defended the hospital’s decision and said the intersection of money and medicine is stressful for everyone involved.

“Every soul that is called to veterinary medicine does so because they want to help. And when finances prevent us from doing that, it is truly heartbreaking,” the organization said in a statement posted to social media. “In our efforts to help as many pets as possible, vet teams will try multiple avenues to help pet owners afford care. … Surrender is always an option of last resort. Our goal is to keep a pet healthy and with their loving family. However, if that is impossible, saving the pet’s life takes priority.”

Despite accusations from callers that Jaxx was euthanized, Mills said he is alive and recovering well. For privacy reasons, she was unable to say more about Jaxx’s current situation or identify the new owners.

That privacy protection has turned out to be a good thing, the hospital said.

“The pet owner signed a legal document surrendering ownership,” its statement reads. “That document also ensures the privacy of the new owner and based on the social media vitriol that has run wild since the news story aired, we’re thankful for that.”

WGME is standing behind its story.

“(Maine Veterinary) claims there are inaccuracies in our story but does not identify any facts that are incorrect,” the station said in an update posted Sunday. WGME said its reporter obtained documents from the dog’s owner corroborating her story.

The Maine Veterinary Medical Association is standing behind the pet hospital.

In a letter sent to vet industry members over the weekend, past association president Dr. Janelle Tirrell condemned the “hordes of strangers with keyboards” who are quick to judge.

“The rapid rise in the temperature of rhetoric on social media can turn even the routine care decisions we exercise daily into a dangerous and volatile situation for staff and clients,” the letter says. “In the best of circumstances, conveying complex medical information to our clients is a difficult task. On social media, and in the news, it is impossible.”

When clickbait stories with a cute puppy picture make the rounds, the entire veterinary industry gets painted with the same brush, said Tirrell, which puts all its members’ safety in jeopardy.

The association is collecting data and responses for an industrywide impact analysis of this and similar events, she said.