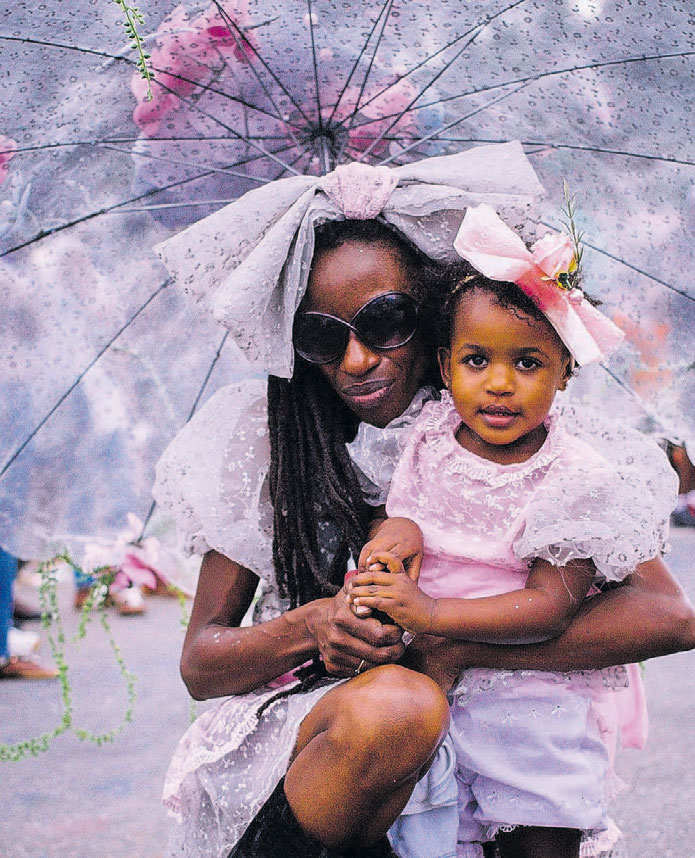 NEXT IMAGE
Looking beneath the surface of traditional mas
PAULA LINDO

The mas presentation Belmont Baby Dolls, conceived by choreographer and designer Makeda Thomas, was an attempt to reinterpret the Baby Doll mas in a way that subverts the usual presentation. The small band performed on the road on Carnival Monday and Tuesday.

Thomas said her main inspiration for creating the band was seeing how the world was responding to her two-year-old girl child. “My daughter has always been my Carnival baby,” she said. “She was born on Carnival Saturday in 2017. Most recently she’s taken to walking around with a little brown baby doll and it hit me one morning that the thing I’m thinking about the most was girls and women and our relationship, not only to the patriarchy that determines so much of the quality of our lives but also how we love up on one another, so my relationship to my sistren, my dear girlfriends, my sisters, my daughter, my mother, to other women in my lives and so this felt like the truest mas to play and to think about some of those things. It’s a mas that allows us to look at what it means to be woman and female, and perhaps challenge that.”

Thomas said the way the mas is traditionally played is important. “It’s about a mother who is trying to hold someone accountable for a child, and can be played very pitifully, and I’ve seen e our reaction to that type of performance be very disdainful.

There’s a lack of agency and deep critical thinking in thinking about what’s happening in that moment. It’s still brilliant and it still allows us to look at things like race, class and gender at the same time in the way that it is performed, but I hoped to imbue this with more space for agency on the part of the performer in a way for the mas to connect to their real lives, so it’s not a parody, it’s not funny, so we can talk about what this mas means.”

Thomas said she looked at sources both within the Caribbean and in the diaspora in researching the mas.

“Like most traditional mas, it was most historically played by men, but contemporary artists like Hazel Brown, Michelle Isava and Stephanie Leitch have played Baby Doll mas over the years. New Orleans has a strong Baby Doll tradition that goes alongside T&T’s in its creation and development, including being mostly played by men.

Then somewhere around the 1920s, 1930s, it became played by more mothers, black women who, instead of it being a begging mas, it was about showing independence where you could afford to take care of yourself and your child and you didn’t have to look for the father, because it did not matter, so there was a way that I was trying to have a conversation in between all of those performance traditions.

“In New Orleans, it’s also aligned to black female sexual freedom, these women were able to choose their partners, they had sugar daddies, hence the name Baby Dolls, so there’s also that connotation to it. So I’m invoking the traditional performativities of this mas, but also reaching out to the diaspora for other influences.”

The band also collaborated with Shannon Lewis, a Berlin and Toronto-based artist who was recently in residence at Alice Yard, using her long silk prints as their banners. Thomas said it was important that the band be situated within Belmont. “We want this idea that we are strong and come from legacies that may require lots of healing but yet still we should feel our importance, we are valued, we are fragile, we deserve to be taken care of. It’s about providing a visual representation of this lovely little delicate brown baby doll. It’s amazing the reaction people, even young children, have when they see Nyah with a doll that looks like her. Just the image is important, seeing a brown baby doll in a fragile soft beautiful way is important for young girls.

We hope that our performance then, which should be free and using tools like improvisation to demonstrate that freedom and the choices that you can find within that, that little girls watching us negotiate our relationships with our partners and with other men and women in our lives, that they then learn some of the tools for survival that we have learned.”

Thomas said even though the mas costumes are made of delicate materials, “it’s a bit too beautiful and we need some grotesque and so we’re adding things like skulls and heavy black bows, and we’re finding lots of other things to put in there, so you go how beautiful and oh how delicate and then you notice this, and there’s clearly something deeper going on there, if I look a bit deeper, what’s underneath this beauty, and that there’s more that we’re saying.”