In Arizona, drought ignites tensions and threatens traditions among the Hopi
Preservation of dry farming a key factor in debate 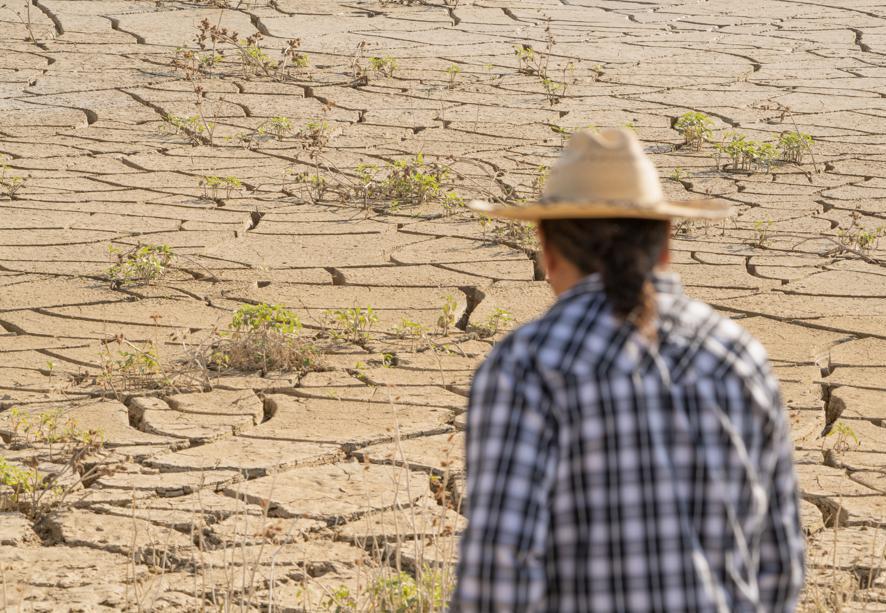 MOENKOPI, Ariz. — On the bone-dry plateau where the Hopi people have lived for more than 1,000 years, Robinson Honani pulled his truck to the side of a dirt road and pointed to a carcass.

“This is where the cows come to die,’’ Honani, manager of the Hopi Office of Range Management, said one morning in September as he spotted the remains nearby of another bovine decaying under the sun. It was at least the 10th dead cow Hopi range officials had found in recent weeks.

Alarmed by the two-decade drought that has dried up springs, withered crops, and killed cattle, the Hopi Tribal Council ordered ranchers in August to slash their herds in a bid to preserve water supplies and avoid the cruelty of an even larger death toll.

But an outcry by Hopi cattlemen, who say they are providing families with locally raised food, compelled the council to rescind its edict, a decision that has unleashed a fierce discussion across the reservation over what traditions to safeguard in a time of climate change. The tensions involve farmers who need water to grow crops and ranchers who need water for their cattle. Some Hopi leaders say the tribe should do everything it can to preserve dry farming, a tribal tradition in which crops grow despite scant rainfall through drought-resistant seeds, small fields, and terraced gardens.

What both the farmers and ranchers appear to agree on is that the difficult choices feel unfair to the Hopi, who are thought to descend from some of the Southwest’s earliest inhabitants. They have been forced to feud over restrictions, they said, at the same time that cities in Arizona, experiencing breakneck population growth, have been depleting the state’s strained reservoirs.

“Why isn’t the governor cutting off water resources to southern Arizona?’’ asked Clark Tenakhongva, vice chair of the Hopi Tribe, which is in the northeast part of the state. “Cut out the pools. Cut out the water recreation areas. Cut out the golf courses, and you’ll start resolving some of the issues the state of Arizona is looking at right now.’’

But while Arizona’s booming population consumes ever larger quantities of water, the flaring tempers in one of the state’s poorest corners have revealed how the drought, which has ranked among the most severe in recorded history, has inflicted pain unevenly around the West.

In a parched landscape where the Hopi honed water-harvesting methods over centuries, the tribe estimates the reservation has about 2,200 head of cattle that consume about 66,000 gallons of water a day.

Supporters and opponents of herd reduction both agree they are quarreling over ranching on a scale dwarfed by huge cattle operations elsewhere. The famed King Ranch in South Texas, for instance, is home to more than 30,000 head of cattle.

“I only owned seven head before reducing that number myself to three because of drought,’’ said Makwesa Chimerica, a carver of kachina figures who lives in the village of Hotevilla. He said he was stunned when authorities then ordered him to sell or slaughter his remaining cows.

“I was raised going to the ranch with my grandfather,’’ said Chimerica, who also practices dry farming. “That’s the future I want for my two sons.’’

Still, Hopi officials who pushed for the cattle-reduction measure counter that ranching was introduced by colonial powers, beginning with the churro sheep brought by the Spanish in 1540 before cattle became more common in the 20th century.

“The Hopi consider themselves farmers, first and foremost,’’ said Priscilla Pavatea, director of the tribe’s Office of Range Management. “Ranching comes after that. We urgently need to take steps to save our land base.’’

Outsiders can find it hard to fathom how the Hopi squeeze harvests out of small farms without using ditches or modern irrigation methods in lands traditionally receiving only about 8.5 inches of rainfall a year.

But over the course of centuries, Hopi farmers developed techniques and seeds adapted to the dry climate. Forgoing pesticides, they focused on oasislike mesas with farmable floodplains, moisture-retaining soils and springs, what Hopi call qatsi suphelawta, or the "perfect location for life," according to archeologists Wesley Bernardini and R.J. Sinensky.

The Hopi have long endured challenges to this tradition, declining to bend to modern farming techniques. But the drought that has gripped the Southwest since 2000 is thought to be as bad or worse than any in the region over the last 1,200 years.

Researchers have estimated that human-influenced climate change has contributed considerably to the severity of the drought. On the ground level in the Hopi Reservation, such conditions are reflected in disappointing crop yields and disappearing springs.

“The sand dunes don’t stop growing,’’ said Curtis Naseyowma, 58, a Hopi rancher who raises cattle near the village of Moenkopi. “I see this with my own eyes because I’m out there with my cattle every day.’’

Naseyowma said it was possible to ranch sustainably even during times of drought. Before the tribal council’s order, he had already reduced his herd on his own from 23 head to eight since the start of the year, he said.

“I understand where they’re coming from, but I don’t get why they didn’t talk to the ranchers first,’’ Naseyowma said. “This whole mess could have been avoided.’’

The dispute has raised uneasy comparisons to how federal authorities pressured both the Hopi and their Navajo neighbors to reduce sheep herds after the Great Depression because of drought and overgrazing, erasing a crucial source of income.

While some Hopi later shifted to raising cows, supporters of scaling back cattle ranching say that the tribe now has little choice but to move forcefully to preserve water supplies for farmers struggling to grow crops like corn, beans, and squash.

Others in the reservation say the tribe is also now grappling with the legacy of mining operations, now discontinued, that pumped billions of gallons of water from the aquifer that both the Hopi Tribe and the Navajo Nation rely on for drinking water. For decades, the coal giant Peabody Energy used the water for a slurry mixture needed to produce electricity for cities like Los Angeles and Phoenix.

An unusually strong monsoon season over summer has done little to improve fortunes of Hopi farmers and in some places made things worse. Water levels remain precariously low even after flooding washed away fields in parts of the reservation.

At the same time, drought has rekindled tensions between the Hopi and Navajos. The tribal nations speak radically different languages and hew to an array of distinct cultural traditions, but they have lived side by side, often amicably, for centuries.

Boundaries drawn by the US nurture some of the disquiet. Navajo Nation, which spreads over 27,413 square miles, completely surrounds the Hopi reservation, with a size of 2,532 square miles. The Navajo Nation’s population is also much larger, with more than 399,000 enrolled members on and off the reservation, compared to the Hopi Tribe’s 19,000.

As drought drags on, herds of feral horses on both reservations have emerged as a point of contention. Like cattle, the horses consume water supplies coveted by farmers and households.

Horses who died from thirst have also recently been found on the Hopi reservation, leading to more finger-pointing over whether off-reservation neighbors had been dropping off sickly horses on Hopi land.

“The Navajos know we’ll get rid of them,’’ Honani said, explaining how the Hopi Tribe occasionally rounds up the horses and sells them for anywhere from $10 to $50 apiece to a buyer in Gallup, N.M. “This land isn’t meant to take this number of animals.’’