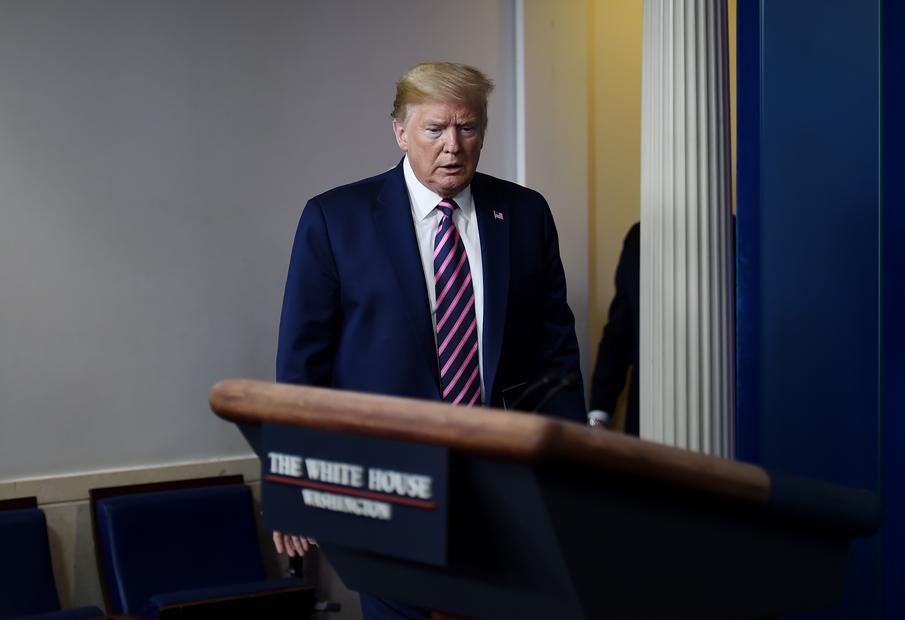 President Trump conducted a short coronavirus briefing and took no questions on Friday.

WASHINGTON — President Trump’s erratic handling of the coronavirus outbreak, the worsening economy, and a cascade of ominous public and private polling have Republicans increasingly nervous that they are at risk of losing the presidency and the Senate if Trump does not put the nation on a radically improved course.

The scale of the GOP’s challenge has crystallized in the last week. With 26 million Americans now having filed for unemployment benefits, Trump’s standing in states that he carried in 2016 looks increasingly wobbly: New surveys show him trailing significantly in battleground states like Michigan and Pennsylvania, and he is even narrowly behind in must-win Florida.

Democrats raised substantially more money than Republicans did in the first quarter in the most pivotal congressional races, according to recent campaign finance reports. And while Trump is well ahead in money compared with the presumptive Democratic nominee, Joe Biden, Democratic donors are only beginning to focus on the general election, and several super political action committees plan to spend heavily on behalf of him and the party.

Perhaps most significantly, Trump’s single best advantage as an incumbent — his access to the bully pulpit — has effectively become a platform for self-sabotage.

His daily news briefings on the coronavirus outbreak are inflicting grave damage on his political standing, Republicans believe, and his recent remarks about combating the virus with sunlight and disinfectant were a breaking point for a number of senior party officials.

On Friday evening, Trump conducted only a short briefing and took no questions, a format that a senior administration official said was being discussed as the best option for the president going forward.

Glen Bolger, a longtime Republican pollster, said the landscape for his party had become far grimmer compared with the previrus plan to run almost singularly around the country’s prosperity.

“With the economy in free-fall, Republicans face a very challenging environment, and it’s a total shift from where we were a few months ago,’’ Bolger said. “Democrats are angry, and now we have the foundation of the campaign yanked out from underneath us.’’

Trump’s advisers and allies have often blamed external events for his most self-destructive acts, such as his repeated outbursts during the two-year investigation into his campaign’s dealings with Russia. Now there is no such explanation — and, so far, there have been exceedingly few successful interventions regarding Trump’s behavior at the podium.

Representative Tom Cole, an Oklahoma Republican, said the president had to change his tone and offer more than a campaign of grievance.

“You got to have some hope to sell people,’’ Cole said. “But Trump usually sells anger, division, and ‘We’re the victim.’ ’’

There are still more than six months until the election, and many Republicans are hoping that the dynamics of the race will shift once Biden is thrust back into the campaign spotlight. At that point, they believe, the race will not simply be the up-or-down referendum on the president it is now, and Trump will be able to more effectively sell himself as the person to rebuild the economy.

“We built the greatest economy in the world; I’ll do it a second time,’’ Trump said earlier this month, road-testing a theme he will deploy in the coming weeks.

Still, a recent wave of polling has fueled Republican anxieties, as Biden leads in virtually every competitive state.

The surveys also showed Republican senators in Arizona, Colorado, North Carolina, and Maine trailing or locked in a dead heat with potential Democratic rivals — in part because their fate is linked to Trump’s job performance. If incumbents in those states lose and Republicans pick up only the seat in Alabama, Democrats would take control of the Senate should Biden win the presidency.

“He’s got to run very close for us to keep the Senate,’’ Charles Black, a veteran Republican consultant, said of Trump. “I’ve always thought we were favored to, but I can’t say that now with all these cards up in the air.’’

Republicans were taken aback this past week by the results of a 17-state survey commissioned by the Republican National Committee. It found the president struggling in the Electoral College battlegrounds and likely to lose without signs of an economic rebound this fall, according to a party strategist outside the RNC who is familiar with the poll’s results.

The Trump campaign’s own surveys have also shown an erosion of support, according to four people familiar with the data, as the coronavirus remains the No. 1 issue worrying voters.

The private data of the two parties is largely mirrored by public surveys. Last week, three Pennsylvania polls and two Michigan surveys were released showing Trump losing outside the margin of error. And a pair of Florida polls were released that showed Biden with a slim advantage in a state that is all but essential for Republicans to retain the presidency.

To some in the party, this feels all too similar to the last time they held the White House.

In 2006, anger at President George W. Bush and unease with the Iraq War propelled Democrats to reclaim Congress; two years later they captured the presidency thanks to the same anti-incumbent themes and an unexpected crisis that accelerated their advantage: the economic collapse of 2008. The two elections were effectively a single continuous rejection of Republican rule — as some in the GOP fear 2018 and 2020 could become in a worst-case scenario.

“It already feels very similar to the 2008 cycle,’’ said Billy Piper, a Republican lobbyist and former chief of staff to Senator Mitch McConnell.

Significant questions remain that could tilt the outcome of this election: whether Americans experience a second wave of the virus in the fall, the condition of the economy and how well Biden performs after he emerges from his Wilmington, Del., basement, which many in his party are privately happy to keep him in so long as Trump is fumbling as he governs amid a crisis.

But if Republicans are comforted by the uncertainties that remain, they are alarmed by one element of this election that is already abundantly clear: The small-dollar fund-raising energy Democrats enjoyed in the midterms has not abated.

Most of the incumbent House Democrats facing competitive races enjoy a vast financial advantage over Republican challengers, who are struggling to garner attention as the virus overwhelms news coverage.

Still, few officials in either party believed the House was in play this year. There was also similar skepticism about the Senate. Then the virus struck, and fund-raising reports covering the first three months of this year were released in mid-April.

Republican senators facing difficult races were not only all outraised by Democrats, they were also overwhelmed.

The Republican Senate woes come as anger toward Trump is rising from some of the party’s most influential figures on Capitol Hill.

After working closely with Senate Republicans at the start of the year, some of the party’s top congressional strategists say the handful of political advisers Trump retains have communicated little with them since the health crisis began.

In a campaign steered by Trump, whose rallies drove fund-raising and data harvesting, the center of gravity has of late shifted to the White House. His campaign headquarters will remain closed for another few weeks, and West Wing officials say the president’s campaign manager, Brad Parscale, hasn’t been to the White House since last month, though he is in touch by phone.

Then there is the president’s conduct.

In just the last week, he has undercut the efforts of his campaign and his allies to attack Biden on China; suddenly proposed a halt on immigration; and said governors should not move too soon to reopen their economies — a week after calling on protesters to “liberate’’ their states. And that was all before his digression into the potential healing powers of disinfectants.

Republican lawmakers have gone from watching his lengthy daily briefings with a tight-lipped grimace to looking upon them with horror.

“Any of us can be onstage too much,’’ said longtime Representative Greg Walden of Oregon, noting that “there’s a burnout factor no matter who you are; you’ve got to think about that.’’

Asked about concerns over Trump’s briefings, the White House press secretary, Kayleigh McEnany, said, “Millions and millions of Americans tune in each day to hear directly from President Trump and appreciate his leadership, unprecedented coronavirus response, and confident outlook for America’s future.’’

Trump’s thrashing about partly reflects his frustration with the virus and his inability to slow Biden’s rise in the polls. It’s also an illustration of his broader inability to shift the public conversation to another topic, something he has almost always been able to do when confronted with negative story lines ranging from impeachment proceedings to payouts to adult film stars.

Trump is also restless. Administration officials said they were looking to resume his travel in as soon as a week, although campaign rallies remain distant for now.

As they look for ways to regain the advantage, some Republicans believe the party must mount an immediate ad campaign blitzing Biden, identifying him to their advantage and framing the election as a clear choice.

“If Trump is the issue, he probably loses,’’ said Black, the consultant. “If he makes it about Biden and the economy is getting better, he has a chance.’’