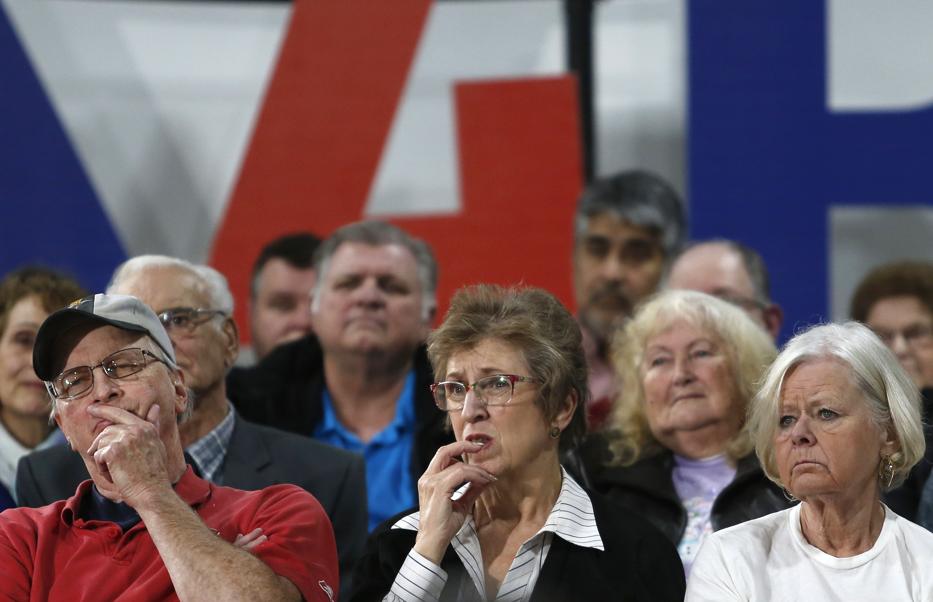 WAUKEE, Iowa — The crowd inside the gym was fired up and so was Joe Biden, delivering a sharp closing pitch to Iowa voters that centered on the subject he has been most comfortable addressing throughout his presidential campaign: defeating President Trump.

“I can hardly wait to debate him,’’ the former vice president said with a playful smile on Thursday, drawing laughs from the gathering of almost 300 people. “Folks, I will not be extinguished by Donald Trump, no matter how hard he tries.’’

In this presidential election, which Biden calls the very “battle for the soul of the nation,’’ he has cast himself as the most practical and solid choice to go up against a president who has upended America. And in the final days before the Iowa caucuses, Biden appeared to effectively double down on his message even as he displayed some of his flaws as a candidate that have made Democrats anxious.

“I do not believe we are the dark, angry nation that Donald Trump sees in his tweets in the middle of the night,’’ Biden thundered in Waukee to loud cheers. “I don’t believe we’re the nation that rips babies from the arms of their mothers and thinks that’s OK.’’

This is a race in which “character was on the ballot,’’ he often told his audience. Biden sought to remind the country of its own, delivering a nostalgic message that was like political comfort food for his mostly older audiences.

His appearances in the Iowa homestretch were mostly low-key; there were no concerts or celebrities like some of his rivals had. Some felt intimate, others somewhat slow. Biden made his pitch with calm pacing, his left hand often in his suit jacket pocket. The events typically lasted more than two hours and sometimes featured the rambling delivery and lapses in thought that have raised concerns about the 77-year-old Biden’s suitability for the rigors of an intense general election campaign.

On Sunday, in a fiery though somewhat disjointed speech to more than 500 people at Clarke University in Dubuque, Biden seemed looser after days on the road and tried not to stray off topic as he pitched himself as the candidate who can heal the nation and restore its moral fabric.

For his supporters, eager for him to return the country to a place of decency and calm, it was all part of the draw. They appreciated his answers to questions from voters, even when he tended to meander or devolve into long-winded, detailed explanations. They liked the moments in which he displayed some feistiness. Sometimes, he powerfully bellowed against Trump; a few times he let out more of an awkward growl. At an event Wednesday afternoon he was looking weary, but by Saturday he had picked up the energy and so had his audiences.

At a gym inside the Roosevelt Creative Corridor Business Academy Saturday morning, chants of “Joe, Joe, Joe’’ were sustained longer than usual before quickly petering out, and a lone man in the audience, yelled, “We love you’’ to more cheers.

Yet, it’s one thing for Biden to effectively convey his message of restoration and return to normalcy. It’s another as to whether voters will want it at a time when other candidates are energizing a younger base and calling for much more drastic structural change.

Biden has maintained his lead in national polls and his wide edge with Black voters. But in Iowa he has slipped as Senator Bernie Sanders of Vermont has surged to front-runner status, and the differences in Biden’s appeal showed in his venues and surrogates.

His crowds were typically older and whiter, his event spaces had a feel of Americana, and included school gymnasiums, a veterans’ post, and a wedding venue dubbed “The Grass Wagon.’’ Old-school Iowa political figures, former US agriculture secretary and Iowa governor Tom Vilsack, and his wife, Christie, were back on the trail with Biden. Former US secretary of state John Kerry also campaigned for his longtime Senate colleague.

There were some new faces, including Representative Abby Finkenauer of Iowa, one of a slew of Democratic women elected to Congress in 2018.

But it was Sanders who drew the younger political star power of Representatives Alexandria Ocasio-Cortez, Rashida Tlaib, and Ilhan Omar, while campaigning for Senator Elizabeth Warren of Massachusetts were former presidential candidate and US housing secretary Julián Castro and Representatives Ayanna Pressley, Katie Porter and Deb Haaland.

Biden supporters were unfazed, saying they were drawn to his folksy charm, longtime experience in government, and tight-knit relationship with former president Barack Obama. As he took on Trump, pledging to heal the country and reverse “the culture of cruelty’’ the president had fostered, Biden often received standing ovations.

He drew some criticism when he pointed out that Sanders, an independent, is “not registered as a Democrat.’’ Mayor Pete Buttigieg of South Bend, Ind., took his own shots at Biden, calling his ideas “recycled arguments’’ and part of the “same old playbook.’’

Biden’s jabs at his opponents were more subtle.

He didn’t name names, but inside school gyms, he took digs at Sanders’s record on gun safety laws, pointing to his passage of the Brady Handgun Violence Prevention Act, or the Brady Bill, which mandated federal background checks on firearm purchasers. And he argued that although other candidates had talked big on climate change and health care, he was the only one to work on sweeping legislation to tackle the issues.