Wu passes on face time with developers
The early months of the new administration are proving quite different for builders than under Wu’s predecessors. 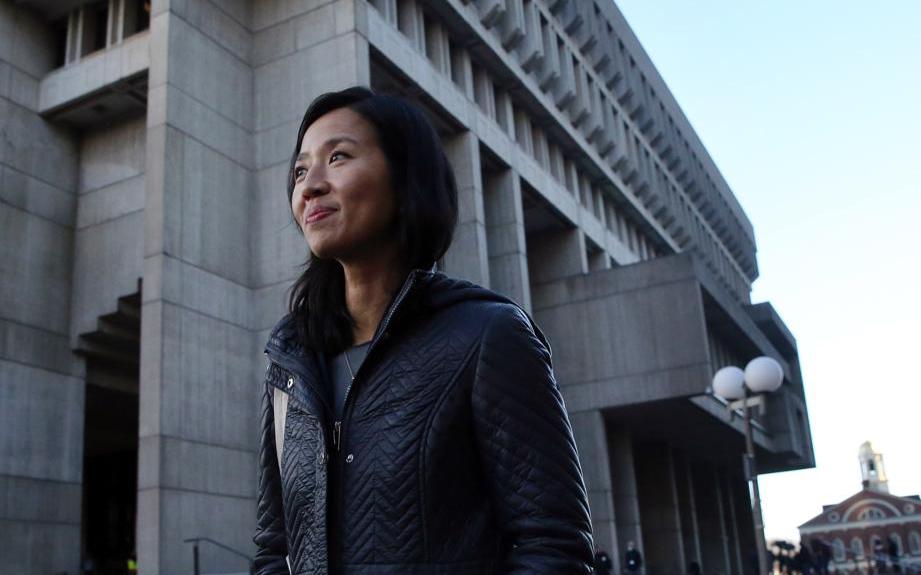 Mayor Michelle Wu is adhering closely to a populist agenda that got her elected in a landslide, one that is guided by the priorities of community groups, not business interests. 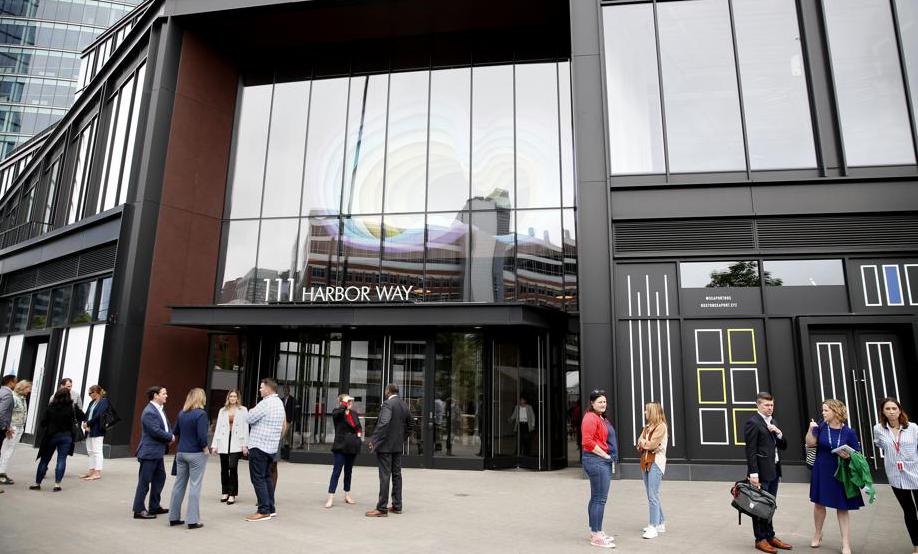 Wu has notably missed a number of high-profile ribbon cuttings and groundbreaking ceremonies, including the June opening of Amazon’s new building in the Seaport District (above). Governor Charlie Baker (below) was there. 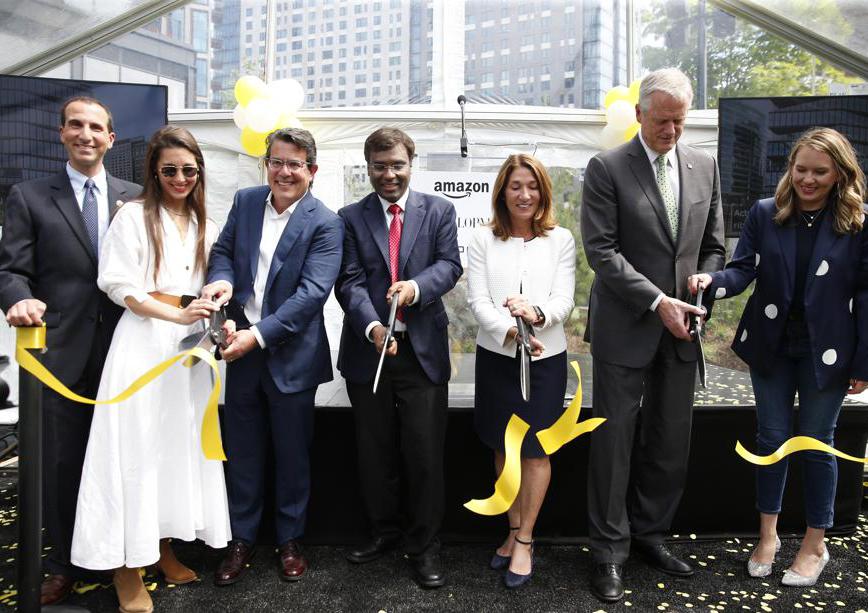 NEXT IMAGE
By Jon Chesto and Catherine Carlock and Shirley Leung, Globe Staff and Globe Columnist

For more than three decades, big Boston real estate developers enjoyed an open door policy with the mayor’s office. Unfettered access flourished under Thomas M. Menino and continued under Martin J. Walsh and even during the brief tenure of Kim Janey.

Now with Michelle Wu, those days are over — intentionally so.

Since her election in November, developers have been clamoring to set up one-on-one meetings with Wu about their plans. Many have been rebuffed and redirected to meet with other members of her administration to discuss big projects that would create thousands of jobs and add millions in future tax revenue to city coffers.

What’s more, Wu has notably missed a number of high-profile ribbon cuttings and groundbreaking ceremonies — bread and butter events for her predecessors — including the June opening of Amazon’s new building in the Seaport District and an event a few days later to celebrate a deck over the Massachusetts Turnpike that will hold an office and lab tower, and hotel. Governor Charlie Baker attended both events.

Developers “are used to having the best seat at the table, and now they’re just at the table, and that’s a change for them,’’ said Erin O’Brien, a University of Massachusetts Boston politics professor. “The fact that they’re complaining tells you that the power dynamics in Boston are shifting. And that’s what Michelle Wu’s coalition wanted.’’

Indeed, Wu is adhering closely to a populist agenda that got her elected in a landslide, one that is guided by the priorities of community groups, not business interests. It is a rebalancing of power by the city’s first woman, person of color, and millennial to be elected mayor. And developers are uneasy as Wu sets out to deliver on campaign promises to blow up the city’s development process, cap rent growth, and extract more affordable housing funding from big builders.

How Wu is dealing with developers also provides a window into how she governs. In an interview, Wu said she believes City Hall can be more effective if she empowers her Cabinet chiefs and department heads, and credits that approach for enabling her administration to launch new initiatives in areas such as child care, climate resiliency, and downtown revitalization.

“There are so many empowered leaders within the City Hall organization taking on this work versus just one person at the top, a bottleneck approving every single decision,’’ she said.

Wu acknowledges it took a long time to fill key posts in her administration — in large part because she had a truncated two-week transition between Election Day and taking office — while also steering the city through another COVID-19 surge.

“My focus from the beginning has been building out our team at City Hall, so that we could get as much done as possible in collaboration with community members,’’ she added. “That means that I haven’t been able to take every meeting that I’ve wanted to, especially some of the one-on-one’s.’’

Similarly, that’s why Wu has missed out on prominent real estate events, noting that June was a particularly busy month for her administration.

“As our team gets solidified, I will have more time for more of those meetings and appearances,’’ she said.

Developers, however, shouldn’t expect a return to business as usual.

They have cultivated mayoral relationships over the years for a reason: They need City Hall’s blessing to get their projects underway. And other mayors have obliged, in part because new buildings generate revenue for the city budget. Property taxes account for nearly three-quarters of the city’s revenue, up from one-half two decades ago — and the majority comes from taxes on “commercial, industrial, and personal properties,’’ not residential.

Menino relished the sway he had over developers, famously taking a hands-on approach to real estate projects, poring over a detail such as what the top of a Back Bay skyscraper should look like.

Walsh didn’t get as involved as Menino, instead delegating the work of managing a massive building boom to the revamped and renamed BPDA. But as a former construction union leader, Walsh understood the industry and knew what development meant for jobs and Boston’s economy, and was known in real estate circles for taking meetings with developers.

When Janey became acting mayor after Walsh became US labor secretary last year, she, too, kept an open-door policy with developers. And when she ran for mayor, prominent developers and real estate lawyers served on her campaign finance committee.

Even though Wu was a longtime city councilor before she was elected mayor, she has never been known to have a particularly close relationship with the downtown business community, and her campaign received comparatively few donations from the real estate industry, especially in the early months of last year’s wide-open primary.

With Wu in charge of City Hall, developers should expect to meet first with Arthur Jemison, who started in late May as both chief planner and BPDA director. Wu introduced Jemison to a few dozen developers at a gathering at the city-owned Parkman House in April, and several say they’ve met with him individually since then. Developers are encouraged that someone is now at the helm of the agency, but concerned about staffing losses. More than 100 people have left the BPDA since 2020, and many positions remain unfilled.

“I’ve not met one person who does not want her to succeed,’’ said longtime Boston real estate attorney and former city councilor Larry DiCara. “But she probably has spent less time talking to business leaders than many of her predecessors.’’

The issue of Wu’s relationship with the business community came up at a recent meeting of the Greater Boston Chamber of Commerce’s executive committee. While chamber chief executive Jim Rooney said he talks frequently with the mayor on issues such as schools and reviving downtown, other leaders have struggled to understand how to work with her.

“They’re still trying to figure out how to deal with City Hall. That’s the stage we’re in,’’ said Rooney. “We all have to practice the fine art of being patiently impatient.’’

Developer Richard Taylor said members of the business community are experiencing a bit of a culture shock.

“The business community, in particular the real estate community, has to appreciate this is different, and adjust our thinking on how to work with City Hall,’’ said Taylor, who is developing a city-owned lot in Roxbury’s Nubian Square and is bidding on another city-owned parcel in Roxbury.

As Ron O’Hanley, chief executive of State Street Corp. and chairman of the chamber board, points out, the business community ultimately needs the support of the mayor, and vice versa.

“The region’s not going to be successful if she’s not successful,’’ O’Hanley said. “I’m confident that she’s going to have a high impact, and I think it’s incumbent upon all of us to work with her.’’

While developers may feel out of sorts with Wu, it’s a different story with community leaders and activists — many of whom feel heard and seen for the first time in a long time.

She met with representatives for the developer and the university, alongside local politicians. As Harvard and Tishman Speyer proposed mitigation measures — more affordable housing, more master planning — and neighbors remained wary, Wu hosted a meeting at City Hall in June to broker a peace.

Tony D’Isidoro, head of the Allston Civic Association, said Wu spoke first, then Jemison. Then D’Isidoro was given an opportunity to speak alongside two neighborhood activists, before Harvard or the developers.

“I think that sent a message to Harvard and Tishman Speyer,’’ said D’Isidoro, “that she was not going to move forward until she had assurances from the community.’’

In fact, Wu called D’Isidoro days before the BPDA approved the project’s first phase in July to make sure he was OK with it.

For state Representative Mike Moran, a Wu supporter who represents Allston, that meeting was a watershed moment to have all the key stakeholders around the table — not only Harvard and developers, but also Allston-Brighton groups and local elected officials — as equals.

“Never once has that happened . . . until Michelle Wu,’’ Moran said.

He added that no one should be surprised by this approach. Wu ran as a reformer.

Shirley Leung is a Business columnist. She can be reached at shirley.leung@globe.com.