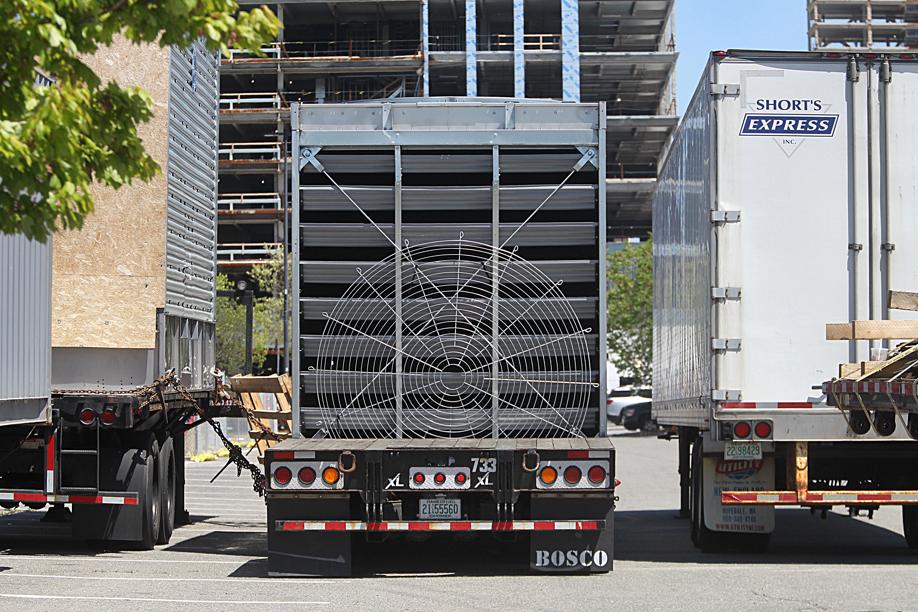 A decontamination machine from Battelle, which operates such machines in 48 US cities, was seen in the Kmart parking lot in Somerville.

Hailed as a “game changer" in the region’s quest for much-needed protective medical gear, a massive machine used to sterilize respirator masks that was rushed into emergency use has come under increased scrutiny in recent weeks.

The machine, which Partners HealthCare arranged to bring to the Boston area in April, has been sharply criticized by some health care workers, with one group saying it treats nurses “like guinea pigs in an experiment.’’

Even as new COVID-19 cases in Massachusetts have begun to decline and public focus has shifted to the economy’s reopening, the personal protective equipment that front-line workers rely upon to safely treat patients remains in short supply. But nurses unions in Massachusetts and nationally have balked at reusing masks cleaned by the decontamination system produced by the Ohio defense contractor Battelle, citing the lack of independent research backing up Battelle’s claims.

Though limited governmental testing recently determined that treated masks could be safely reused a few times, the testing stopped well short of Battelle’s assertion that N95 masks — which are designed to be worn only once — can safely be put through 20 decontamination cycles.

Concerns about the machine took on added weight after an NBC News report detailed the questionable means by which the decontamination system was granted emergency use authorization by the Food and Drug Administration, as well as the exorbitant amount the federal government is paying for its use.

That report describes a White House coronavirus task force eager to provide a quick solution to its inability to procure necessary personal protective equipment for the nation’s hospital workers — and that hurried into a contract with Battelle, despite the concerns of at least one task force member.

Battelle operates machines in 48 US cities, including Somerville. Originally expected to cost the federal government $60 million, Battelle is now owed $413 million, according to NBC News, and could be due as much as $600 million in taxpayer money over the course of the pandemic.

In a statement to the Globe, Judith Pare, director of nursing and occupational health and safety for the Massachusetts Nurses Association, called the allocation of federal funds for the machines “abhorrent,’’ adding that the Battelle system — which has not received standard FDA approval but was given temporary emergency authorization to clean an unlimited number of masks after President Trump pressured federal regulators on Twitter — treats nurses “like guinea pigs in an experiment that could threaten their long-term health.’’

Even before the taxpayer cost was made public, however, some health care workers had raised questions about the machine’s capabilities.

Battelle, citing its own research from 2015, has insisted that N95 masks can undergo 20 decontamination cycles without showing deterioration to the masks’ filters or head straps. Though a news release from Massachusetts General Hospital announcing the machine’s arrival in Somerville in April put that number at 30, a spokesman for Partners said that number was in error, and the health system’s policy dictates reusing the masks five times.

Before the Battelle machine’s arrival, Dr. Orhun Muratoglu, director of the Technology Implementation Research Center at MGH, was part of a large group of national scientists that determined hydrogen peroxide vapor was the most effective way to treat respirator masks, as the method performed well in three key areas — decontamination, filtration, and mask fit — through 10 cycles.

“We know that, at least in our hands, up to 10 cycles of hydrogen peroxide decontamination, the filtration of the mask doesn’t change,’’ Muratoglu said. The Battelle system, he added, “is probably the safest and most effective way of doing this at large volume.’’

Since then, Muratoglu said, masks being treated by the Battelle system in Somerville have been periodically pulled out of circulation for additional testing, which MGH conducts with the partial assistance of Battelle. Masks that have been through five cycles of decontamination in the Somerville system are currently out for testing with Battelle, Muratoglu said.

Independent testing of the Battelle machines does not appear to have studied masks that have been reused that many times.

In May, Richard Peltier, an environmental health scientist at the University of Massachusetts Amherst, was awarded an $85,000 grant by the National Science Foundation to test the efficacy of respirator masks that had been treated by various sterilization methods.

Peltier had little trouble acquiring treated masks from other hospitals in the state, he said, and has so far tested masks that have been decontaminated in five or six different ways. But his requests to Partners HealthCare — the state’s largest health system — for Battelle-treated masks have been rebuffed, he said.

“It actually kind of blows my mind,’’ Peltier said. “There are lots of people who are worried about wearing these things . . . At the same time, you have these corporate entities who are making decisions on what’s safe for somebody to wear, really in the absence of sound data.’’

A Partners spokesman said the health system was unaware of any formal offers to participate in an NSF-funded study. But in an e-mail sent to Peltier and viewed by the Globe, the chief medical officer of a Partners hospital said that he “spoke with the Partners leadership in charge of our work with Battelle and they have already tested the masks at various points in reuse cycle and do not feel further research is necessary.’’

Battelle acknowledges that in recent field testing conducted with MGH — designed to assess the impact on form and fit from actual use — the company has only examined masks that have gone through four decontamination cycles. The results of that testing, said a Battelle spokeswoman, have been excellent.

In a statement, the Massachusetts Health and Hospital Association addressed the ongoing struggle to acquire personal protective equipment, saying that “while hospitals continue to pursue every possible source of new protective equipment, federally authorized decontamination options have made it possible for them to respond to this unprecedented health care challenge and meet the needs of the commonwealth’s patients.’’

But some remain unpersuaded.

Last month, National Nurses United, a nurses union, spoke out against the loosening of federal guidelines to allow health care facilities to provide decontaminated N95 masks to workers. The group cited the Battelle system specifically, arguing that the safety and effectiveness of the treatment process hadn’t been “adequately demonstrated.’’

Pare, of the Massachusetts nurses union, echoed those concerns, adding that the lack of research about potential long-term health consequences for those wearing chemically treated masks for extended periods of time was also troubling. Already, she said, dozens of local nurses who have worn treated masks have reported various issues, from sore throats to headaches and nausea.

“Nurses across the state have been reporting negative reactions when wearing these decontaminated masks, and they report masks being degraded by the process that makes them ineffective,’’ Pare said. “They vehemently object to placing their lives and their families lives in jeopardy from these unproven processes.’’

Pare expressed bewilderment at the idea of turning down independent testing.

“Knowledge is the only power we have throughout this pandemic,’’ she said. “So to turn down an opportunity to gain knowledge, it’s baffling to me.’’

Though Partners, which as of late April had sent 20,000 respirators through the Battelle system, according to previous Globe coverage, eventually declined to provide sample masks, Peltier was able to obtain a single Battelle-treated mask through a back channel.

The mask, which had been treated just once by a Battelle machine, performed well, he said. And his own testing using a treatment similar to the Battelle method showed no impact to function through 10 cycles, supporting Muratoglu’s results. But it is masks that have undergone the multiple Battelle treatments, he added, that he was most interested in testing.

Peltier said he reached out to Battelle about obtaining masks that had been put through its treatment system, and was turned down. A Battelle spokeswoman, Katy Delaney, didn’t directly respond to a question from the Globe about why Battelle had declined to take part in the study.

Peltier said it doesn’t have to be him who tests the Battelle-treated masks; he would be happy, he said, if the masks were to undergo testing at another independent laboratory, pointing out that many labs have the resources to conduct this kind of testing.

His goal, he said, is simply to ensure that front-line health care workers know the full capabilities — and limitations — of the equipment they’re given.

“I would be thrilled if this was the most boring study ever. I would be over the moon if these masks were great,’’ Peltier said.

“But I have a feeling that there’s more information here that needs to be discovered.’’

Dugan Arnett can be reached at dugan.arnett@globe.com.