Black farmers setting down roots in New England
In Vermont, a push to help people of color own and work the land 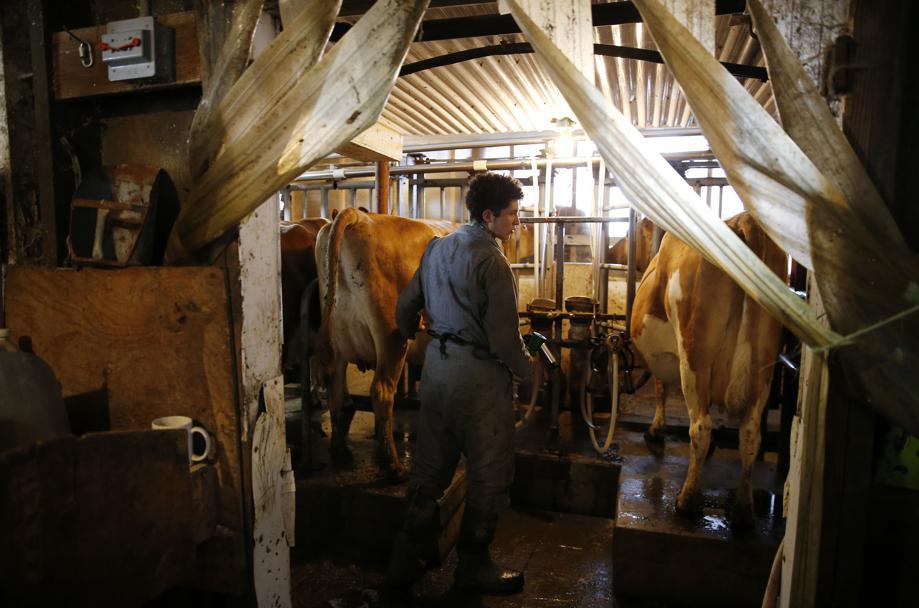 Earl Ransom (right) and his son, Jackson, tended to the tractor at the family’s dairy farm in Strafford, Vt. 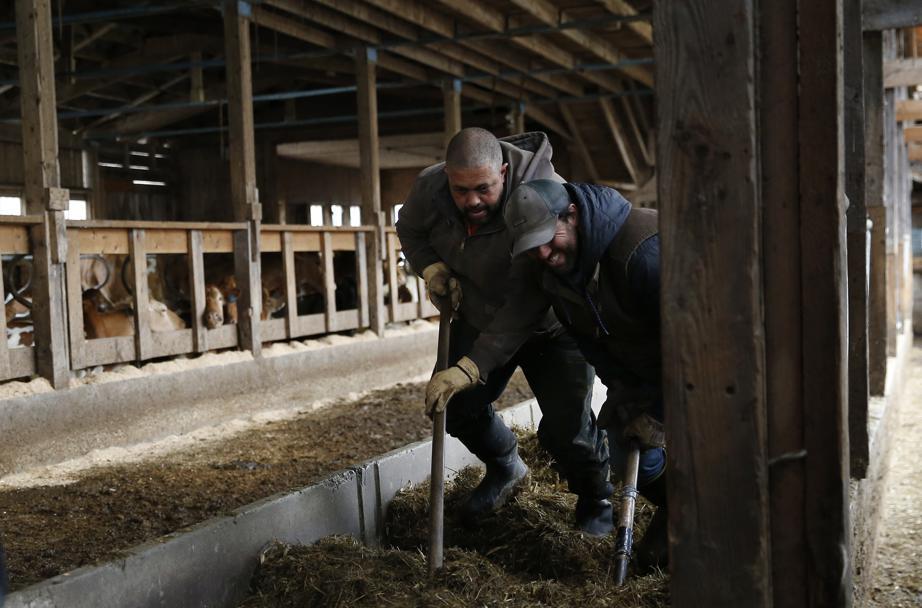 Recently at Rockbottom Farm, Jackson Ransom milked the cows (top), and Earl Ransom and Asa Manning cleaned a feed trough (above). Earl Ransom, the farm’s owner, knows almost all of his cows by name, including Passion Fruit (center). 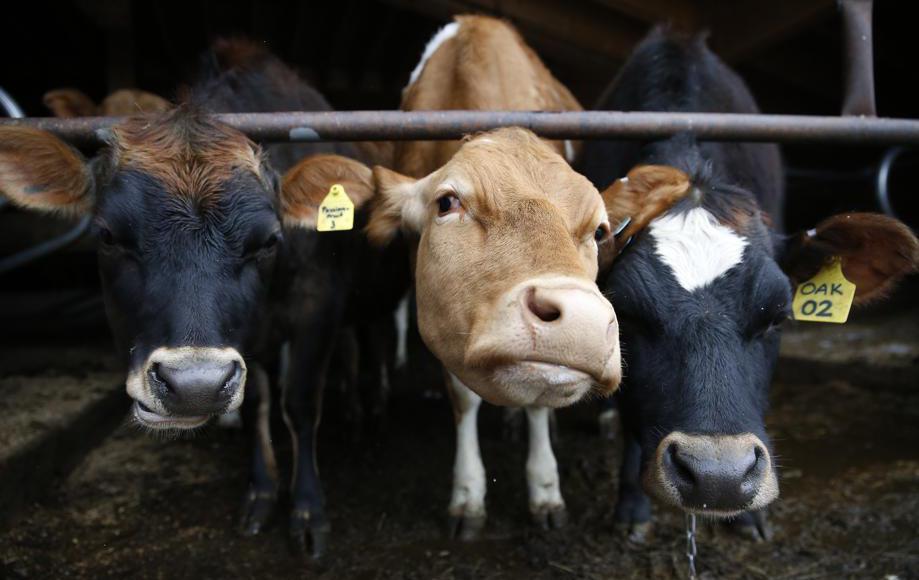 STRAFFORD, Vt. — Earl Ransom stooped beside a feeding trough at Rockbottom Farm and filled his hands with long strands of lush grass, straightening up beside two rows of hungry Guernsey dairy cows who couldn’t get enough of the stuff.

“I’m passionate about this,’’ Ransom said, extolling the efficiency of nature’s recycling. “We grow grass to feed cows to make manure to grow more grass.’’

Ransom, 48, owns the only dairy farm left in Strafford, which had 50 a half-century ago. He’s also a Black man in a state where only 13 Black people owned farmland in 2017, compared with 6,382 white people, according to a federal survey.

“We’re few and far between,’’ Ransom said of Black farmers in Vermont, which had only three in 1969. “Good luck finding them.’’

In Massachusetts, the disparity also is stark. In that 2017 census, the US Department of Agriculture recorded that 27 Black people owned farmland, compared with 6,442 white people.

But slowly, the number of New England’s farmers of color appears to be growing. And in Vermont, where dairy farms once seemed to be everywhere, grass-roots movements from Brattleboro to Lake Champlain have begun attracting and encouraging Black farmers and other farmers of color.

At a time of growing calls to address racism as it affects a broad range of Black enterprise, a keen sense of self-determination is driving this interest, said Stephanie Morningstar, executive director of the Northeast Farmers of Color Land Trust, an advocacy organization that receives support from grants, tax-exempt donations, and partnerships.

By year’s end, Morningstar estimated, an additional 20 New England farms will be owned by Black people and other people of color.

Nationally, the numbers of farmers of color have plummeted over the last century, particularly in the South, where the emergence of civil rights legislation in the 1960s did not stem the long decline. Only about 35,000 of 3.4 million farmers in the United States today are Black, according to federal data. That’s a drop of nearly 1 million Black farmers over the last 100 years, and a reduction in Black-owned farmland to about 2 percent of total acreage from a peak of 14 percent in 1910.

It is a baleful trend in which racism played a dominant role. The late-Civil War promise of “40 acres and a mule’’ to freed enslaved people — one of the earliest efforts of reparations to America’s Black population — was swiftly forgotten after President Abraham Lincoln’s assassination.

And in the decades that followed, Black farmers and would-be farmers were systemically disadvantaged.

Black farmers fared especially poorly at the hands of government officials and lenders, studies have shown. A century ago, for example, white farmers received generous land subsidies from the federal government that were not available to large numbers of Black farmers. As the decades passed and debts piled up, many Black farmers who applied for loans were denied, ignored, or put off with delays.

The recent $1.9 trillion federal package for COVID-19 relief included $10.4 billion in agricultural support, about half of which is targeted for debt relief, land acquisition, and other assistance for disadvantaged farmers. It isn’t framed in the legislation expressly as a gesture toward reparation for past wrongs, but it could work that way — at least as a start.

Black farm ownership has always been rare in New England, and connecting aspiring farmers of color to land continues to be daunting. But in Vermont, ambitious efforts to do that have begun.

In Brattleboro, the SUSU commUNITY Farm has signed an option to purchase nearly 40 acres of farmland outside the city. The effort, part of its mission to promote racial equity and healing, was jump-started by a GoFundMe campaign to purchase food for families of color at the beginning of the pandemic.

That campaign proved so successful that its founders looked to acquire a farm to bring people from marginalized groups back to the land. With help from Retreat Farm in Brattleboro and the Vermont Land Trust, they are closing in on that goal.

“COVID really exacerbated the speed at which we moved. It’s incredibly important and needed, but there are challenges,’’ said Amber Arnold, a cofounder of the effort.

The farm will help people “learn how to grow their own food to connect back to their lineage and heritage and to have access to land,’’ Arnold said. “Part of our vision for the farm is to create a permanent space that will be passed down in perpetuity to the Black and brown community in Vermont.’’

Elsewhere in Vermont, a land-access project called Every Town is working to ensure that at least one quality parcel of land in every community in the state will be held forever for stewardship by Black, Indigenous, and other people of color.

Kenya Lazuli, the director of Every Town, said the movement has received encouraging grass-roots support as it seeks to identify “safe places’’ for people of color throughout the state. Farmland will be part of the mix, Lazuli said, but Every Town will seek a wide variety of ways to access the land.

“I think people are ready to make that kind of change and ready to give up some of their privilege,’’ she said.

State Representative Brian Cina, a Progressive/Democrat from Burlington, has sponsored a bill to promote racial equity that, among other steps, would work with Every Town to pursue its mission.

“We’re talking about the legacy of an economic system that treated people differently based on race,’’ Cina said.

Steffen Gillom, the NAACP president in Windham County, said he believes state officials are trying harder to understand the concerns of minorities in Vermont, which is 94 percent white. At the same time, he said, people of color are pushing for change on their own, rather than waiting for white stakeholders and lawmakers to do so.

“This is a homogeneous state that is wrestling with its identity in some ways,’’ Gillom said. “Vermont wants to be looked at as a bastion of liberalism, but in another sense a lot of Vermonters have a nativist tone that doesn’t make a lot of folks of color feel welcome.’’

Gillom, 31, said he dreams of one day owning an acre or two to pass down.

At Rockbottom Farm, Earl Ransom already is living his dream, working a once-abandoned spread that was bought by his father in the early 1960s.

“It was cold and miserable, and neither my dad nor his wife knew how to do anything,’’ even how to work a wood stove, Ransom said with a chuckle. “The ceiling was collapsed, and there were flying squirrels in the attic.’’

Now, the 450 acres he farms produce 700,000 pints of milk a year, half of which go for ice cream through Ransom’s Strafford Organic Creamery.

“I love this. I built it,’’ said Ransom, who has been midwife to nearly all the 76 Guernseys he keeps here.

Ransom said he doesn’t often think about race, and that he has personally found that “the not-so-subtle part of racism is relatively rare.’’ Still, he’s reminded from time to time, “either directly or indirectly,’’ that he is a Black farmer in a field of white.

There are people who consider him a hard-working outlier, he said. There’s the seed salesman who asked to speak to his boss. There’s the electrician who ducked back into his car when he saw Ransom approach.

There’s also the perception that “everyone who is not white is inherently lazy and not productive. Until proven otherwise, they will cling to that for a very long time,’’ said Ransom, who estimated he works 70 to 90 hours a week in the summer.

“It’s not always overtly racist, but it sometimes comes across that way because they seem to have to show their disdain for otherness,’’ Ransom said.

At Rockbottom Farm, Ransom is rooted to a family legacy that might be passed to a third generation. Ransom said one of his sons is interested in carrying the farm forward. There’s no cellphone service at present, but there is Internet, and the striking mountain vistas extend into New Hampshire.

For Ransom, the hard demands of farming are a way of life. And they’re also its satisfaction.