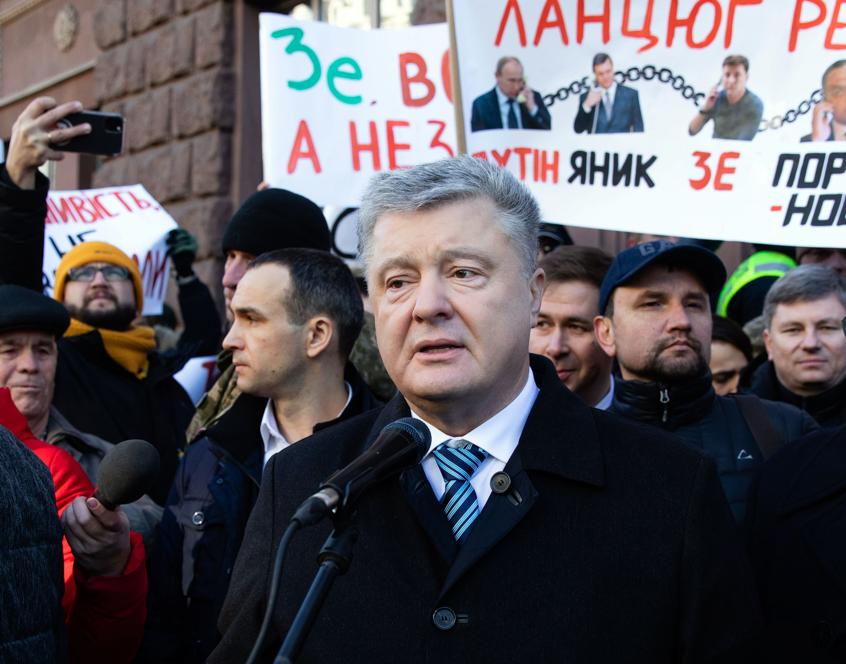 MOSCOW — The Ukrainian police on Friday questioned Ukraine’s former president, Petro Poroshenko, after threatening to arrest him if he failed to appear, in what a growing chorus of critics including the European Union say is a politically motivated vendetta.

They say the failure of the United States to discourage the new Ukrainian government’s legal assault on Poroshenko illustrates how the once-dominant American role and moral authority in Ukraine’s internal politics have been undermined by President Trump’s efforts to persuade the country’s new leaders to investigate Trump’s political opponents.

Political prosecutions have haunted Ukraine since independence. A former president, Viktor Yanukovych, in 2011 imprisoned the opponent he narrowly beat in a presidential race, Yulia Tymoshenko, and other opponents.

Poroshenko is not just a former president but also a prominent political opponent of President Volodymyr Zelenskiy, who won election last spring on an anti-corruption platform that included a pledge to end politically motivated investigations.

Since Zelenskiy became president, the police have questioned Poroshenko as a witness in 16 distinct criminal cases. Over the months, the investigations have piled up, even after a critical September meeting between American and Ukrainian officials, and in December, Poroshenko became the subject of a treason investigation.

The September meeting surfaced during the fall impeachment proceedings in testimony from George Kent, the deputy assistant secretary of state for European and Eurasian affairs, who did not attend the meeting but based his account on conversations with a US diplomat who did.

The meeting took place well after the Ukrainians had become aware that Trump was withholding military aid while asking them to announce the investigations into former Vice President Joe Biden and allegations that Ukraine tried to help Hillary Clinton’s 2016 campaign. During the course of the meeting, an awkward moment arose.

Kurt Volker, at the time special envoy for Ukraine settlement talks, told the Ukrainians that investigating Poroshenko was “not a wise way forward for the country,’’ Kent said.

It was bread-and-butter advice from an American diplomat in the former Soviet Union, where political prosecutions are common. This time, however, Kent said it elicited a startling response from the top Ukrainian official present, Andriy Yermak, now Zelenskiy’s chief of staff.

“Oh, you mean the type of investigations you’re asking us to open against Clinton and Biden,’’ Yermak responded, according to Kent.

Volker did not respond to the question, Kent said.

Since then, as investigations of Poroshenko have become more overtly political, and the European Union has publicly objected.

The treason case relates to Poroshenko’s negotiation of a French-and-German-brokered settlement agreement with Russia in 2015 called the Minsk II accord, which forced painful concessions on Ukraine. It is unclear, however, how any Ukrainian leader could have achieved a more favorable deal while Russian and separatist forces had surrounded thousands of Ukrainian soldiers in eastern Ukraine and a massacre seemed imminent. Nonetheless, the Ukrainian police are investigating whether Poroshenko committed crimes by agreeing to a series of steps in the settlement deal that allowed local elections before restoration of Ukrainian control of separatist territory.

Poroshenko rejects the accusations categorically. “All the cases against me are purely political,’’ he said in written replies to questions. The arrest warrant, issued to force his appearance for questioning Friday and again next month, stepped up the pressure. Poroshenko said he agreed to appear voluntarily. In all the cases, Poroshenko has been questioned as a witness rather than having been formally identified as a suspect.

“Doesn’t the government understand that such actions do not hurt me — because I am supported by people — but discredit the country as a whole and the legal system in particular?’’ Poroshenko said.

In a statement, Zelenskiy’s office denied any role in the investigations now underway related to Poroshenko. “The Office of the President does not have any influence on the law enforcement or judiciary system,’’ the statement said.

But even critics of Poroshenko’s tenure as president have spoken out against the onslaught of investigations. “We can clearly see bias,’’ Maryna Lilichenko, a lawyer and human rights activist, said. “I don’t support either side in this affair, but everything indicates that this is political.’’