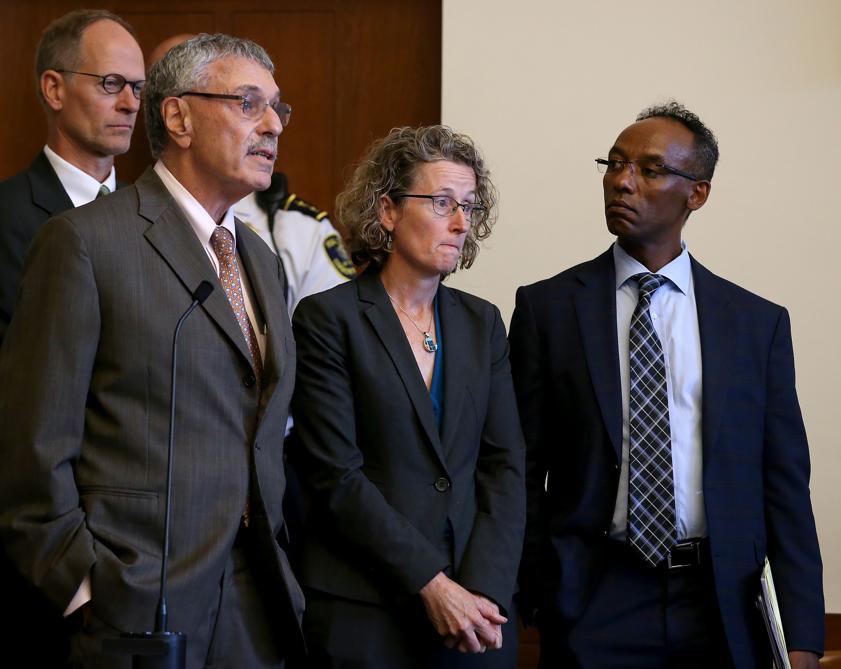 Lawyer Susan Church spent about three hours in custody, unable to finish defending her client, after she was held in contempt by Boston Municipal Court Judge Richard Sinnott.

Maybe Boston Municipal Court Judge Richard Sinnott had had enough of women interrupting men. How dare women act like men in his courtroom.

So off she went. That would be attorney Susan Church, handcuffs and all on Wednesday, for speaking over the judge, as if to remind women everywhere they must be delicate, docile and deferential — or else.

In explaining why he locked her up, Sinnott said from the bench: “Ms. Church was filled with passion in representing her client and kept talking over me.’’

Here’s another way to look at it: Church, a prominent immigration attorney, was doing her job, defending a protester arrested at the Straight Pride Parade for disorderly conduct. Church was citing case law in a forceful and persistent manner because, well, because that’s what good trial lawyers are supposed to do.

“To be thrown in jail for doing her job, it’s unconscionable,’’ said Denise Murphy, a partner and litigator at Rubin and Rudman.

Murphy wouldn’t go as far as to call Sinnott’s action sexist, but said his behavior demonstrates what is known as “black robe syndrome,’’ when judges boss lawyers around to show who’s in charge. And, yes, women tend to be on the receiving end of that brandishing of power.

Murphy has experienced this firsthand over a three-decade career, whether it’s male judges giving her less time to present her case, or allowing opposing lawyers who are men to speak over her.

Murphy said that Sinnott could have punished Church by holding her in contempt and issuing a fine. Instead, she spent about three hours in custody, unable to finish defending her client. There’s no question in Murphy’s mind what should happen next: an investigation and formal inquiry by the administration of the Trial Court and the Massachusetts Commission on Judicial Conduct.

And that’s exactly what the Massachusetts Association of Criminal Defense Lawyers called for on Thursday.

“Judge Sinnott’s actions constitute egregious judicial misconduct, demonstrate a lack of proper temperament, and violated the constitutional and statutory rights of both the accused and Attorney Church,’’ the group said in lengthy statement.

“Unless addressed immediately and publicly, his misconduct will have a chilling effect on defense lawyers who have the constitutional duty to zealously and vigorously advocate for their clients.’’

All the lawyers I interviewed said they have never encountered a situation in which an attorney was handcuffed for interrupting a judge. It’s just not done.

Or as retired federal judge Nancy Gertner put it: “If I had put lawyers in jail for interrupting me, half the bar would be in prison.’’

To be fair, Sinnott was trying to maintain order in a tense situation in a high-profile case, and had even warned Church that she was on thin ice.

There is ceremony to every judicial proceeding: standing when the judge enters the courtroom, addressing him or her as “Your honor,’’ or asking permission to approach the bench. And those traditions should be respected.

At the same time, trial lawyers are trained to make arguments persuasively, and often passionately.

“It’s astounding the court doesn’t respect that level of advocacy,’’ said Ellen Zucker, a partner and litigator at Burns & Levinson.

“Good lawyers, at certain moments, have to balance their respect for courtroom decorum with the need to press zealously for a position they believe is just,’’ Zucker added.

“Certainly, there’s a risk in that as an advocate, but good and experienced judges don’t shirk from the passionate arguments of counsel. To the contrary, they understand it to be part of what makes our system work.’’

Except that women are often held to a double standard. After Sinnott delivered his warning, Church remained as relentless as Perry Mason, something that tends to be accepted, if not expected, of male lawyers but not of women.

“It is troubling when those sort of expectations interfere with the proper functioning of the court,’’ Zucker said.

Eliminating bias begins with more gender diversity in the courtroom. Women are woefully underrepresented, with men three times more likely to appear as lead counsel in civil cases, and four times more likely to serve as trial attorneys in criminal cases, according to a 2015 American Bar Association study.

Men silencing women happens all too often across professions. Just ask Elizabeth Warren; Mitch McConnell and fellow senators issued a rare rebuke after she kept reading a decades-old letter from Martin Luther King Jr.’s widow during a 2017 debate on the nomination of Senator Jeff Sessions as attorney general.

“Senator Warren was giving a lengthy speech. She had appeared to violate the rule. She was warned. She was given an explanation,’’ McConnell said at the time. “Nevertheless, she persisted.’’

Good for her, and good for Susan Church. As a woman, being persistent is no crime.

Shirley Leung is a Globe columnist. She can be reached at shirley.leung@globe.com. Follow her on Twitter @leung.