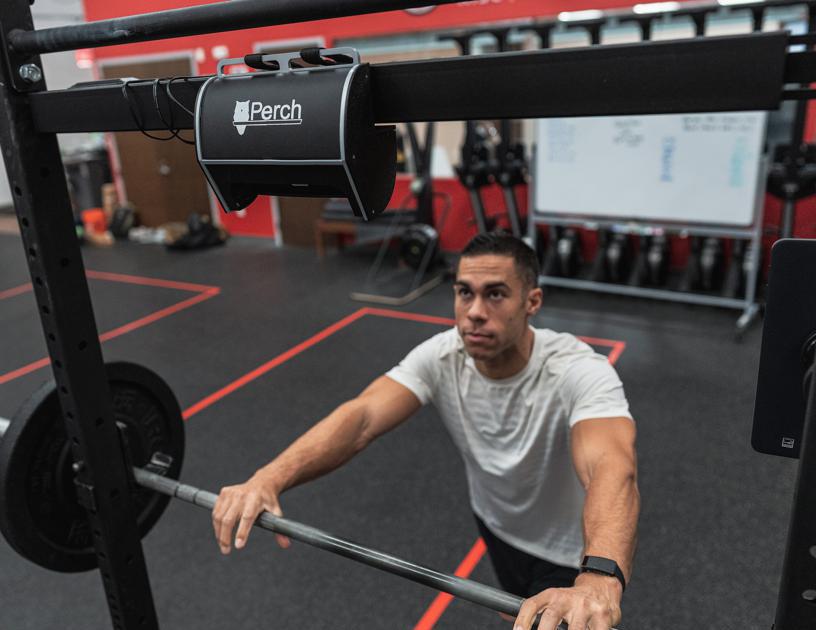 Coincidence? Maybe, but other big players in the sports world took notice, and now the Perch system has made its way into the weight rooms of college and pro sports teams, including the New York Giants, Tennessee Titans, Miami Dolphins, Orlando Magic, and Philadelphia Phillies.

The brainchild of Jacob Rothman, who earned a mechanical engineering degree from the Massachusetts Institute of Technology in 2016, Perch records and measures athletes as they perform different weightlifting movements, creating very precise benchmarks that coaches can use to gauge improvements in strength, speed, form, and technique.

“It’s like giving a weight rack a set of eyes and a brain,’’ said Rothman, who got the idea for the system the hard way. A member of MIT’s varsity baseball team, Rothman herniated a disk in his back while lifting one day.

Rothman believes he could have avoided injury if he had lifted the weight properly. But he couldn’t always have a strength coach looking over his shoulder. So he and some fellow MIT student-athletes decided to build a coach of their own, a digital version that could visually monitor every lift.

In its present form, Perch is mainly used for velocity-based training, which focuses on how quickly an athlete lifts a given weight. Fast lifts of lighter weights can improve quickness, while slower lifts of heavier weights help build raw strength. Even small changes in lift velocity can make a big difference. But it’s not easy to track lift velocities by eyeball.

Some companies tackle the problem with systems that attach a spring-loaded spool of wire to the weight. The wire spools in and out during the lift, providing a precise speed measurement. But this kind of system can be clumsy to use and easy to break.

Perch uses an array of cameras in a box that fastens to the weight rack with a couple of Velcro straps. Its on-board cameras feed images of each lift into a software program running artificial intelligence that calculates the speed of the lift and the amount of energy used to complete it. The results can be read on a tablet for instant analysis.

Perch stores the records for each lift, and the data can be downloaded into a spreadsheet and analyzed to track performance over different time periods.

“It has fundamentally changed how we train in the weight room,’’ said Jeremy Jacobs, the assistant strength and conditioning coach for the LSU football team.

Jacobs used to rely on a rival product that forced him to manually jot down each athlete’s performance on a clipboard then type it into a spreadsheet. The process could take hours. Now the same data is collected instantly for dozens of athletes. That means Jacobs can provide each player real-time guidance on how to improve their workouts.

Rothman said future upgrades to Perch software will be able to analyze the weightlifter’s posture and technique, sending out warnings that the athlete is using the wrong stance or grip, which may reduce the risk of injuries like the one that hobbled Rothman.

Perch is designed for elite athletes, with prices to match: about $2,500 for each unit. Larger customers receive bulk discounts; LSU bought 22, one for each weight rack in the gym.

But Perch may have a future in home fitness, a market that’s been booming since COVID-19 drove millions of people out of their fitness centers. Market research company NPD Group estimates that last year’s lockdown helped increase sales of home fitness gear by 84 percent over the same period in 2019. Among the biggest winners was high-tech exercise bike company Peleton, which became profitable for the first time, as 2020 revenue doubled to $1.8 billion.

A growing number of home systems feature AI enhancements. For example, a $2,400 fitness bike called CAR.O.L. uses algorithms to vary pedaling speed and enable short but intense workouts, and a $3,000 home gym called Tonal A.I. uses machine learning to automatically figure out how much weight the user should be lifting.

“In general there’s a lot of interest in trying to build systems that understand physical activity behavior, so that people can more easily track what they’ve done,’’ said Stephen Intille, an associate professor at Northeastern University who studies personal health informatics. “I don’t know that there’s any evidence that AI would do that any better than, say, a personal trainer, but you might be able to use an AI system to do that at lower cost.’’

Rothman, too, has his eyes on the home fitness market. He’s designing a less costly version of Perch with an easier-to-follow software interface. And he views Perch as an essential tracking tool for the serious weightlifter.

“If you didn’t have this technology,’’ Rothman said, “it would be like going for a run without a stopwatch.’’

Hiawatha Bray can be reached at hiawatha.bray@globe.com.