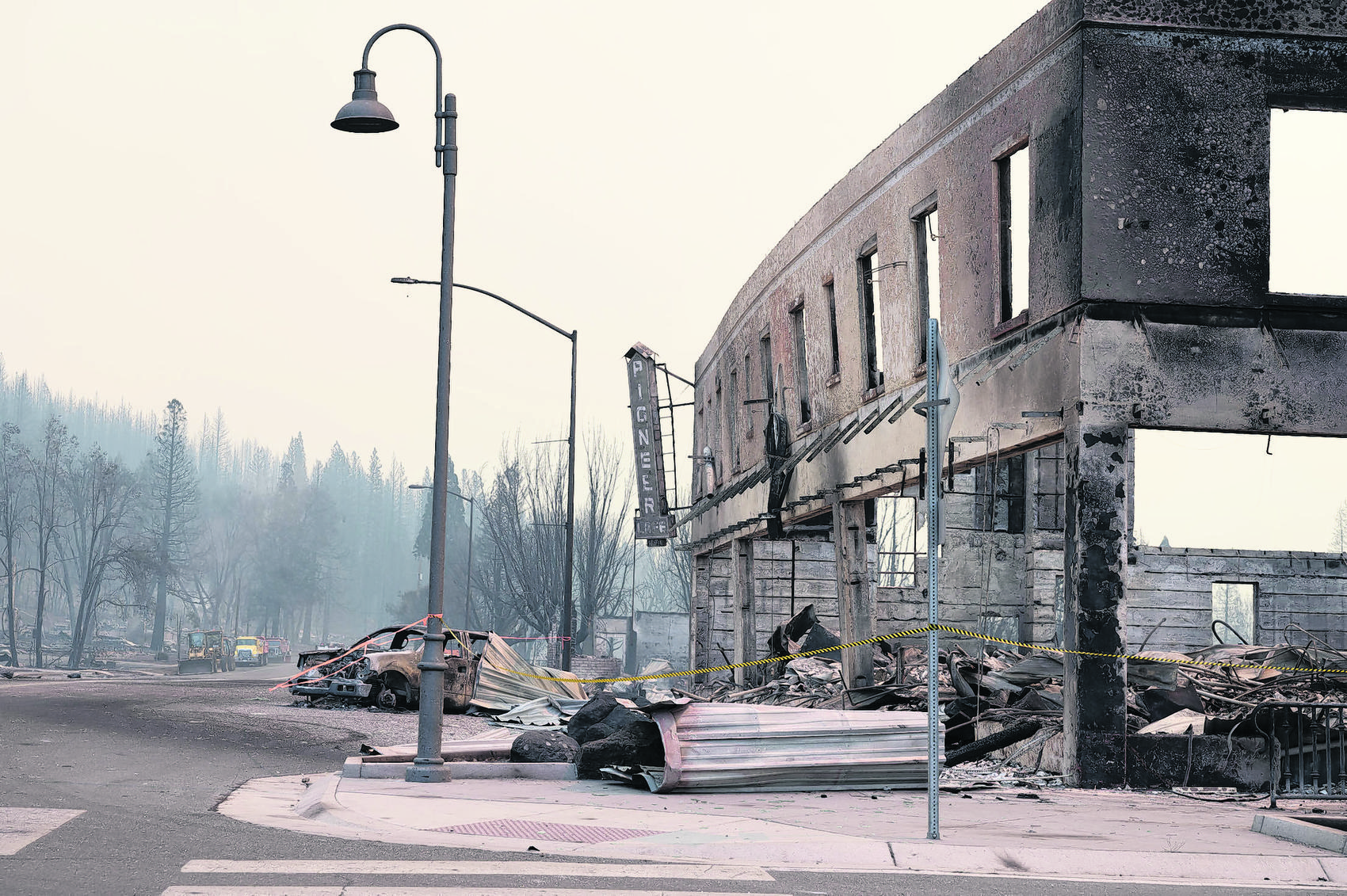 The sign for Pioneer Cafe hangs on the burned and buckling exterior of the Sierra Lodge on Main Street in Greenville in August after the Dixie Fire burned the town. The facade collapsed minutes later, covering the street in debris.

By The Sacramento Bee Editorial Board

This year’s Dixie Fire, which may have been caused by PG&E’s equipment, is the state’s second-largest wildfire on record. The company is suspected of causing not only the Dixie Fire but also the Fly Fire, which later merged with the larger blaze. The 2018 Camp Fire, caused by aging, failing infrastructure in the same county where Dixie would burn just three years later, remains the deadliest and most destructive wildfire in state history. By August, PG&E was already suspected of starting at least 16 major wildfires, matching 2020’s total with months yet to go in the fire season.

This week, the utility revealed in a quarterly report that the Dixie Fire is under federal investigation and expected to cost the company upward of $1.5 billion. PG&E was served with a subpoena for documents related to the fire by the U.S. Attorney’s Office for the Eastern District of California in early October, the company said.

PG&E’s checkered record dates to at least the groundwater contamination near the Mojave Desert town of Hinkley starting in the 1950s, which made attorney Erin Brockovich a household name. In 1994, the PG&E-caused Trauner Fire led to more than 700 counts of criminal negligence in Nevada County. And the company is still under probation for its criminal conviction in the 2010 San Bruno gas pipeline explosion, which killed eight and injured dozens more in the Bay Area suburb.

The federal judge overseeing that probation recently called the company “a convicted felon that poses a safety hazard to California” and vowed to continue “rehabilitating” PG&E until the last possible moment of its probationary period.

The Camp Fire, which destroyed the town of Paradise, forced the company to plead guilty to 84 counts of involuntary manslaughter while on probation, leading to a maximum state-imposed fine of $3.5 million and contributing to its second bankruptcy. It’s been called the largest and most complex bankruptcy case in U.S. history and resulted in a mandated payout to victims of $13.5 billion.

However, the company’s Fire Victims Trust, which was designed to distribute the money to victims of PG&E’s malfeasance, is struggling. Earlier this year, it was announced that the fund may be as much as $2.5 billion short because the company linked the payouts to its stock price.

Just two months after the company exited bankruptcy in 2020, after striking a deal with Gov. Gavin Newsom’s administration to reorganize under the eye of the California Public Utilities Commission, the Zogg Fire ignited in Shasta County, burning 56,000 acres, destroying over 200 buildings and killing four. The county’s district attorney has since charged PG&E in that fire.

How many crimes must be committed, how much incompetence proven, how many more homes and families destroyed before we say enough is enough?

October’s unexpected torrential rainfall extinguished the Dixie Fire, but we can’t count on providence in the years to come. The state must take action to unravel PG&E’s monopoly before we lose more property, businesses and lives to the flames.

The company’s agreement with the California Public Utilities Commission last year set up a six-step enforcement process that could lead to a state takeover of PG&E contingent on specific safety lapses or serious events, but PG&E remains at the first step, which only requires enhanced reporting. In June, the California Public Advocates Office urged the commission to find PG&E no longer in good standing due to overwhelming deficiencies in its wildfire mitigation plan. In August, the CPUC had to remind PG&E publicly to do something as simple as clearing felled trees near power lines.

A blocked proposal by state Sen. Scott Wiener, D-San Francisco, would have instituted a government takeover of PG&E under a new entity with powers similar to the Sacramento Municipal Utility District. The state could also take advantage of multiple offers on the table from local governments, which would break up the company into smaller, government- or community-owned utilities. San Jose advocated turning the company into a single customer-owned utility. San Francisco even went so far as to offer $2.5 billion for PG&E’s lines within the city, but its offer was dismissed as “pennies on the dollar” by a company that is billions of dollars in debt to its victims.

PG&E’s private ownership, toxic corporate culture and inability to change should have forced the state’s hand years ago. Instead, political inertia has led to more death and destruction. It’s clear now, if it wasn’t then, that bailing out the company was a grave error. One way or another, the governor, the Legislature and utility regulators have to ensure that a public takeover process begins. It’s time to end PG&E as we know it.