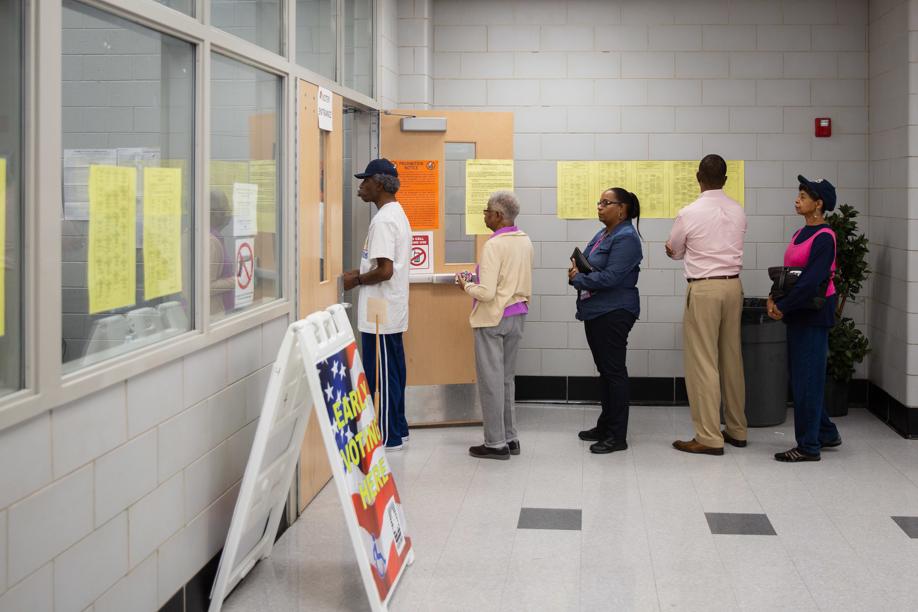 A Georgia voting rights group had filed an emergency request Monday asking to halt the purge of some people.

Democratic officials are pushing for an end to a labor dispute that threatens the party’s sixth presidential primary debate, scheduled for Thursday on a California university campus.

Xochitl Hinojosa, the Democratic National Committee’s communications director and a lead debate organizer for DNC chairman Tom Perez, said Monday that Perez “spent the entire weekend’’ urging stakeholders to engage in good-faith, mediated negotiations. He’s seeking a resolution to the dispute between the food services company Sodexo and about 150 of its employees who work on the Loyola Marymount University campus that is scheduled to host the debate.

The seven candidates who have qualified for the debate have all said they would not attend a Loyola debate if the dispute persists, and at least nine candidates in the Democratic race have expressed solidarity with the UNITE HERE Local 11 amid collective bargaining that involves disagreements over wages and health care benefits.

The DNC is not looking for an alternate debate site.

Sodexo spokesman Enrico Dinges said in an e-mail that the company is “100 percent committed’’ to reaching an agreement and remains at the bargaining table.

President Trump made clear Monday that he intends to participate in at least three general election debates, but he is threatening to sidestep the nonprofit charged with running them.

“I look very much forward to debating whoever the lucky person is who stumbles across the finish line in the little watched Do Nothing Democrat Debates,’’ Trump tweeted Monday morning after The New York Times reported that he was considering skipping them entirely.

Trump said his record “is so good’’ that “perhaps I would consider more than 3 debates.’’ But he also complained, without evidence, that the Commission on Presidential Debates is “stacked with Trump Haters & Never Trumpers’’ and threatened to bypass them.

“As President, the debates are up . . . to me, and there are many options, including doing them directly & avoiding the nasty politics of this very biased Commission,’’ Trump wrote, adding that he would “make a decision at an appropriate time.’’

Trump tussled with the commission and Fox News about the debates during the 2016 election cycle.

He incorrectly claimed Monday on Twitter that the commission was “forced to publicly apologize for modulating my microphone’’ in the first general election debate against Democratic nominee Hillary Clinton in September 2016.

A federal judge is allowing Georgia to proceed with a mass purge of its voting rolls planned for Monday evening, but he also scheduled a hearing later in the week to hear more arguments about the matter.

That decision came after a lawyer for the state assured him that if the judge finds later that some people should not have been removed, they can be easily and quickly reinstated.

Secretary of State Brad Raffensperger in October released a list of more than 313,000 voters whose registrations were at risk of being canceled, about 4 percent of the state’s total registered voters.

Notices were mailed in November giving those voters 30 days to respond to keep their registration valid. A spokesman for the secretary of state’s office said last week that the purge was set to begin Monday evening.

Fair Fight Action, a voting rights group founded by Democrat Stacey Abrams, had filed an emergency request Monday morning asking the court to halt the purge of some people.

US District Judge Steve Jones initially set a hearing on Fair Fight’s request for Thursday and said the purge should be placed on hold until then, but he later decided to hold a hearing Monday afternoon at the state’s request.

Men get probation for trying to access Trump tax returns

Two men were sentenced Monday to probation and community service for trying to hack the IRS to obtain President Trump’s tax returns.

Harris and Hiemstra were students at Haverford College outside Philadelphia in 2016 when they used a school computer lab to open a fraudulent federal financial aid application for an unnamed Trump family member.

The students managed to reset a password and, using Trump’s Social Security number and date of birth, repeatedly tried to import Trump’s federal tax information into the application, according to court documents.

The Department of Education and IRS detected the attempts.