Mother, sisters of slain teen arrested at protest
Wis. officer has not been charged in shooting 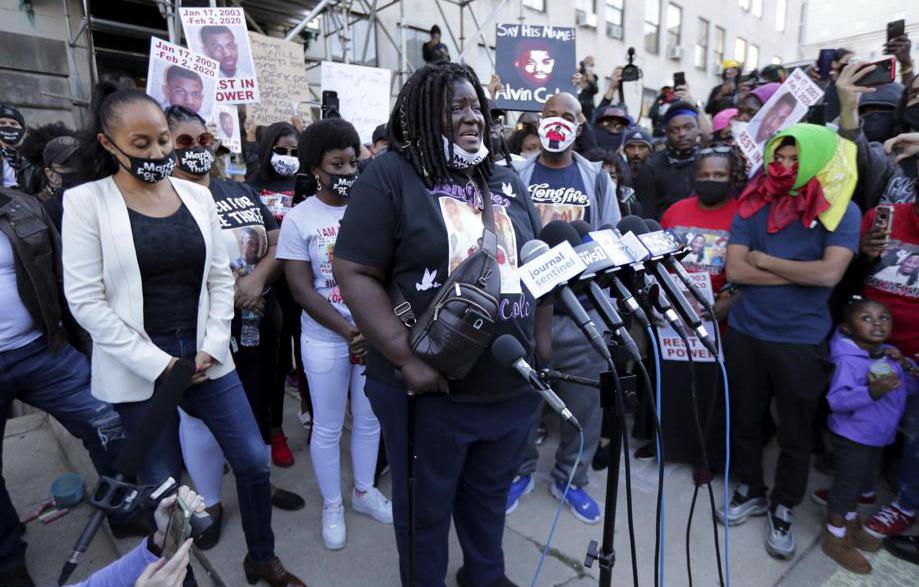 Tracy Cole, mother of Alvin Cole, spoke to the media outside the Milwaukee County courthouse in Milwaukee on Wednesday, eight months after her son’s fatal shooting.

MILWAUKEE — The mother and sisters of a Black teen who was killed by a suburban Milwaukee police officer were arrested by officers who were cracking down on protesters out after a curfew following a decision not to charge the officer.

Alvin Cole’s mother, Tracy, and his sisters Taleavia and Tristiana were arrested Thursday night, their attorney Kimberley Motley said Friday. They were arrested about 8:30 p.m. along with several others in a church parking lot in Wauwatosa, the Milwaukee Journal Sentinel reported.

Motley tweeted that Tracy Cole was arrested “for peacefully protesting’’ and “ended up in the hospital.’’ Motley said Tracy Cole, 48, was taken to Froedtert Hospital with an injury to her arm and forehead. Daughter Tristiana was taken there as well.

Motley later tweeted that both were released from the hospital. Details on why Tristiana Cole was taken to the hospital weren’t immediately known. Wauwatosa police spokeswoman Abby Pavlik didn’t return messages left by The Associated Press on Friday. Police tweeted Thursday night that “several’’ people were arrested, and said one woman requested medical attention and was taken to a hospital.

Protesters gathered in Wauwatosa for two straight nights to demonstrate against prosecutors’ decision not to charge Officer Joseph Mensah in Alvin Cole’s death. Pressure mounted Friday on the city’s police commission to decide whether to discipline Mensah. An independent investigator has recommended he be fired.

The commission’s next scheduled meeting is Oct. 21, but Milwaukee County Supervisor Shawn Rolland, who represents parts of Wauwatosa, called for the panel to meet next week.

“Helicopters are circling above us, the National Guard is deployed on our streets, a curfew is preventing us from walking outside in our own yards, businesses are boarded up, there’s broken glass on our streets, families are marching and mourning the loss of their loved ones, police officers are at risk, and none of us know what tomorrow will bring,’’ Rolland said in a statement. ‘‘If this commission can accelerate its deliberative work, our people, businesses, and neighborhoods can begin to heal faster.’’

The commission’s attorney, Christopher Smith, said the panel will abide by a schedule it adopted in August to handle the Mensah case. The next date on the schedule is Oct. 28, the deadline for parties to submit witness lists in preparation for a hearing, he said. That means the earliest the commission could issue a decision would probably be in November.

“The [commission] will not — and legally cannot — deliberate on this matter until such time that both parties have an opportunity to present witnesses and other evidence,’’ Smith said in an e-mail. “Any suggestions to the contrary only serves to confuse the public and further inflame what is already a tense situation in Wauwatosa.’’

CHICAGO — A 17-year-old accused of killing two protesters days after Jacob Blake was shot by police in Kenosha, Wis., remains in custody in his home state of Illinois as his attorneys fight efforts to send him to Wisconsin to stand trial on homicide charges.

Kyle Rittenhouse appeared on streaming video and wore a face mask during a brief court hearing Friday in Lake County, Ill. Judge Paul Novak scheduled an Oct. 30 hearing on the extradition request, though prosecutors told Novak they were prepared to move faster.

“The law is pretty clear cut on this,’’ said Lake County Assistant State’s Attorney Stephen Scheller. “This case has been dragging on now, we’re already into October. ... We want a hearing as soon as possible.’’

John Pierce, an attorney for Rittenhouse, said there was “no reason to rush’’ and questioned Wisconsin prosecutors’ motivation for pursuing the charges.

‘‘This is a very unique, extraordinary situation,’’ Pierce said. “There is a massive amount of video evidence that shows beyond a shadow of a doubt this is not a legitimate criminal prosecution, it is a political prosecution.’’

In court records filed late Thursday, Rittenhouse’s attorneys argued that he was acting in self-defense and extraditing him to Wisconsin would violate his constitutional rights.

They also argued that Wisconsin prosecutors and Illinois authorities didn’t follow legal technicalities required for extradition. Angelina Gabriele, Kenosha County’s deputy district attorney, said Friday the county’s documents “are in compliance with all legal requirements and their other claims do not have any legal merit.’’

Extradition is typically a straightforward process, and legal experts have expressed doubt that Rittenhouse’s attorneys can prevent a court from sending him to Wisconsin to face charges there.

His arrest has become a rallying point for some on the right, with a legal defense fund that has attracted millions in donations. But others see Rittenhouse as a domestic terrorist whose presence with a rifle incited the protesters.

Officer charged in Floyd’s death can live outside Minn.

MINNEAPOLIS — Citing safety concerns, a Minnesota judge on Friday issued new conditions of release for an ex-Minneapolis police officer charged in the death of George Floyd that would allow him to live in a neighboring state while he awaits trial.

Derek Chauvin posted $1 million bond on Wednesday and was allowed to walk free from the maximum-security state prison where he had been held for his safety since shortly after his arrest. Floyd died after Chauvin, who is white, pressed his knee against Floyd’s neck for several minutes even after the handcuffed Black man pleaded for air before his death May 25. Chauvin was later charged with second-degree unintentional murder, third-degree murder and second-degree manslaughter.

Chauvin’s previous conditions prohibited him from leaving Minnesota without court permission and ordered him to sign extradition waivers if he was released.