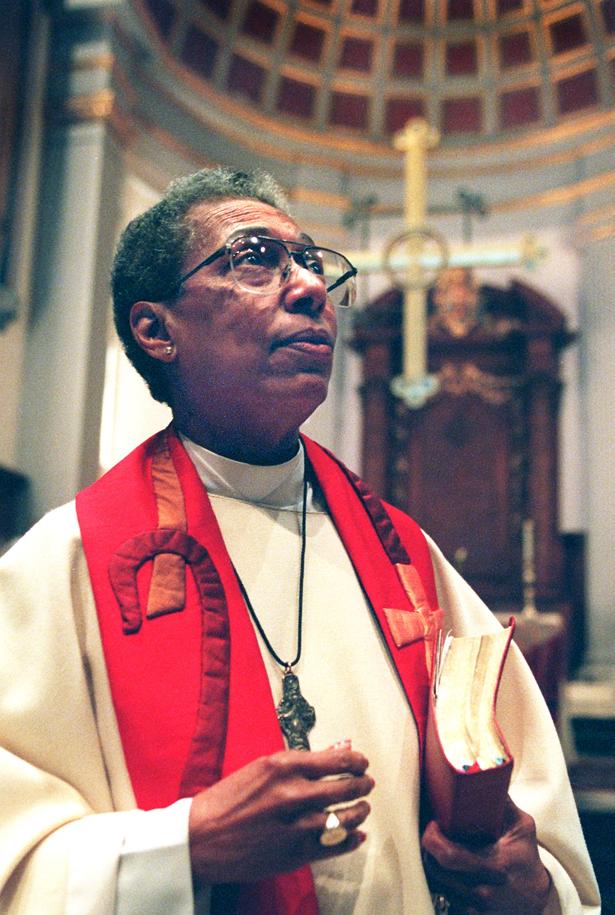 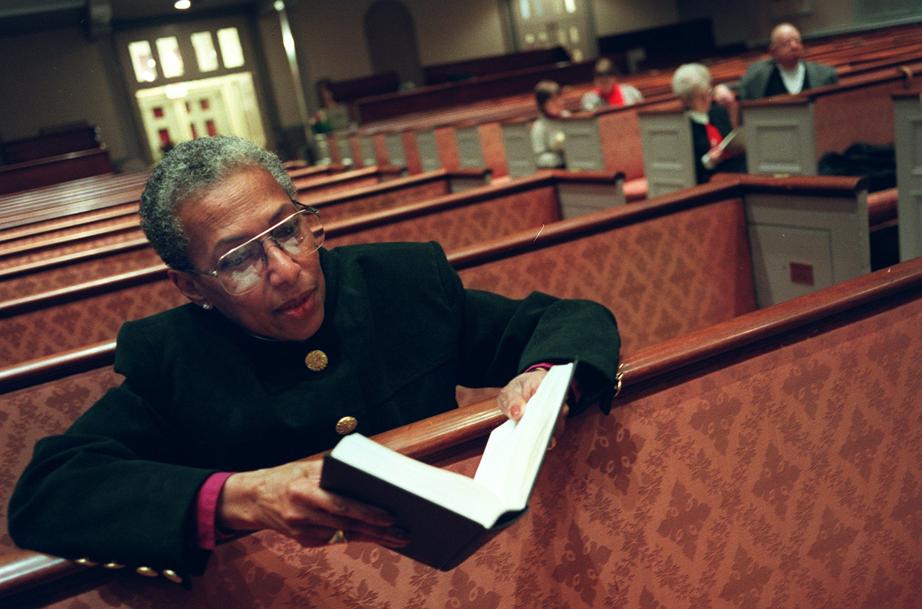 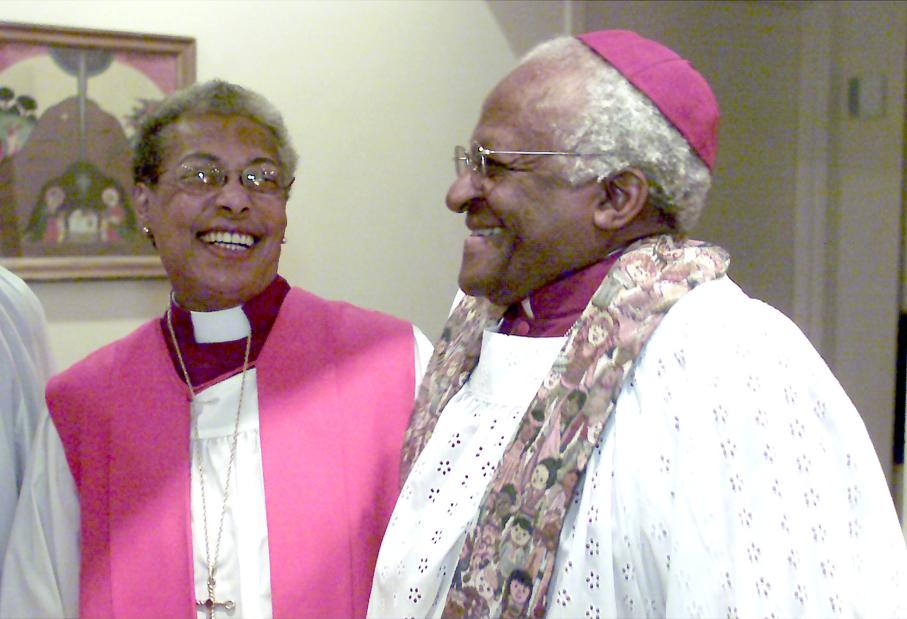 Above: Bishop Barbara Harris in 1999. Left: She met with Archbishop Desmond Tutu in Boston in 2002.

Along the spiritual road to her groundbreaking role in the Episcopal Church, Barbara Clementine Harris was a volunteer prison chaplain who spent so much time praying with those behind bars that she could have tallied a two-year jail sentence of her own.

It wasn’t enough for her, though. “I was being led to the ordained ministry for a different dimension of service,’’ she told the Globe.

In 1989, she became the first woman consecrated as a bishop in the worldwide Anglican Communion. Bishop Harris, who had lived in Foxborough, was 89 when she died Friday night in Lincoln while in hospice care.

Her election in September 1988 as suffragan, or assistant bishop in the Episcopal Diocese of Massachusetts, and her consecration the following February, broke the gender barrier for all major branches of Christianity that trace their bishops as successors to Christ’s apostles.

“She really changed the face of the Episcopal Church and of Christianity at large,’’ said Fredrica Harris Thompsett, professor emerita of historical theology at the Episcopal Divinity School in Cambridge.

With a powerful presence in the pulpit, Bishop Harris gave voice to what she called “the least and the lost and the left out’’ — people she knew something about, and not just through her prison ministry.

In addition to being the first female Episcopal bishop, Bishop Harris was black — a daughter of a church organist and a steelworker in a denomination dominated by a white, often affluent hierarchy.

Bishop Harris was just as iconic a role model for women who wore the clerical robes of other denominations, and she advocated forcefully and frequently on behalf of the emerging LGBTQ community among parishioners and the priesthood, including during the AIDS crisis.

“Barbara believed with every fiber that no one was outside the circle of God’s love,’’ said the Right Rev. Alan M. Gates, bishop of the diocese, in an interview Saturday. “She was our pioneer. She was our conscience.’’

Ordained a priest at 50 and consecrated as a bishop at 58, she brought abundant life experience with her. She had been married and divorced in the early 1960s. She had worked for a public relations firm in Philadelphia, and she held a full-time job as community relations manager for Sun Oil Co. while studying for the ministry at night and on weekends.

Bishop Harris also had registered voters in Mississippi and participated in the Rev. Martin Luther King Jr.’s 1965 march in Alabama from Selma to Montgomery.

As she assumed the duties of the second-in-command in the Episcopal Diocese of Massachusetts, “she carried a large mantle of change with her,’’ Thompsett said.

“She often described herself as having opened doors for others to walk through,’’ Gates said.

In the pulpit, Bishop Harris was known for her sharp wit and, when needed, equally sharp words about injustice. In the days after she retired in 2002, Bishop Harris measured her accomplishments in part with the yardstick of perseverance.

“There were people who appreciated my being outspoken on issues of peace and justice. But I am hard-pressed to point to any specific achievement,’’ she told the Globe that November. “Maybe being able to last was an achievement.’’

One of three children, Bishop Harris was born in Philadelphia on June 12, 1930, a daughter of Walter Harris, who worked in a steel mill, and Beatrice Price, a classical pianist who was the organist and choir director at St. Luke’s Episcopal Church in the city’s Germantown neighborhood.

As an adult, Bishop Harris switched from St. Luke’s to the more activist Church of the Advocate. In 1974, she carried a cross at the front of the procession entering that church for a ceremony in which a group of women who would become known as the Philadelphia 11 were ordained to the Episcopal priesthood — two years before the denomination’s leadership officially allowed women’s ordinations.

She was ordained as a deacon in 1979 and as a priest the following year — steps she didn’t take lightly.

“I struggled against it for a long time. I didn’t feel that I was a worthy candidate,’’ she told the Globe in 1998. “A friend of mine who was a priest and is now a bishop said, ‘God does not call those who are worthy; he makes worthy those who are called.’ That helped.’’

In being elevated to the role of bishop, she had faced opposition by those who objected to women in the priesthood and women in church leadership.

Bishop Harris also was known for outspokenness in her writings. In the late 1980s, before becoming a bishop, she was executive director of the Episcopal Church Publishing Co., which wielded considerable influence through its publication The Witness.

In editorials for the publication, she opposed apartheid policies in South Africa and US aid to rebels in Nicaragua. She also wanted the denomination to stop discriminating against lesbians and gays.

In Boston, Bishop Harris called on women to look at their history as they moved into leadership roles inside and outside the church.

“Rather than using male models, women might look to recapture and reclaim some of the traits exhibited by biblical women, many of whom, despite the oppressive culture of the day, were involved in substantive revolutionary activity … especially when you think of the women in the company of Jesus of Nazareth,’’ she said in an April 1991 Globe interview.

She praised the “mostly nameless’’ and “pretty gutsy women’’ who supported the ministry of Jesus.

No less gutsy herself, Bishop Harris faced death threats after being consecrated as bishop and had to change her phone number several times to dodge harassing calls.

“Nobody can hate like Christians,’’ she told the Globe in 2009, 20 years after that ceremony, at which she felt compelled to arrange for police protection. “The nasty letters I got were from church people, and you would not believe some of the things that they said in those letters — I laughed to keep from crying.’’

Memorial services will be announced at Washington National Cathedral and at the Cathedral Church of St. Paul in Boston. A private graveside service will be held in Philadelphia. Dates are pending, according to the diocese, due in part to the coronavirus pandemic.

Because of her pioneering role, “when one traveled to conferences and events with Barbara, it was like accompanying a rock star,’’ said Gates, who added that people would gather around for photos and autographs.

“She loved the attention,’’ he added, “but at the same time, it didn’t go to her head. She was just Barbara.’’

Thompsett called her “a people’s bishop’’ whose presence inspired everyone from little girls to those who cleaned the church to the denomination’s upper leadership ranks.

“It feels as if a huge rock has moved over and into heaven,’’ Thompsett said. “It’s going to be crowded up there.’’

In a eulogy several years ago for the Rev. Van S. Bird, a friend and mentor, Bishop Harris spoke of how he “showed us through his life and ministry that we are prisoners of hope.’’

With words that could have described her own ministry, she said he “showed us that we are an Easter people, moving through a Good Friday world. One of the sterling qualities and characteristics of Easter people is faithfulness. They hang on until the end.’’

Bryan Marquard can be reached at bryan.marquard @globe.com.