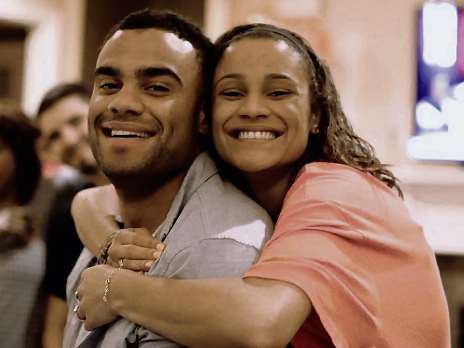 NEXT IMAGE
Solomon’s message to men: Be vulnerable
49ers DL had to learn how to cope with his sister’s 2018 suicide
Solomon Thomas’ left arm is in a sling, the result of surgery for a torn labrum. The pain in the 49er defensive lineman’s shoulder started during theseason and lasted through the Super Bowl, but he knows it’ll go away eventually. The pain he’s come here to talk about is the type that doesn’t.

Solomon and his father, Chris, are sitting in front of 40 or so men at Royal Oaks Country Club for an event sponsored by the Grant Halliburton Foundation.

Pain is what the people here have in common.

“This is a tough place to be,”

Her name was Ella Elizabeth Jones, and she was 24 when she died by suicide on Jan. 23, 2018. Until that morning in a friend’s apartment, she’d never done much of anything to cause her family grief.

A“bright, lovely soul,” Chris calls his only daughter, who was her younger brother’s idol.

“Ella was the coolest person in the world to me,” Solomon says. “She lit up every room she was in.

If Ella had a fault, family members say, it was that she tried to suppress her pain. Kept her mental illnesses to herself.

She was under medication for ADHD and bipolar disorder, but she didn’t always abide by prescriptions. Didn’t like the way the drugs made her feel.

Ella’s depression only spiraled after 2011, when her family says she was sexually assaulted during a frat party at the University of Arkansas.

Even if she felt like she couldn’t be happy anymore, she never stopped trying to make others feel better, right up until the end. On her phone, her final messages were encouraging texts to distraught friends.

“In the two hours before she took her own life,” Solomon says, “she saved someone from taking theirs.”

Ella’s father, brother and mother, Martha, first had to learn to live with the awful reality of her final act, let alone her absence. They weren’t equipped for such a burden. No one is. Chris was in New York when Martha called to tell him.

On the Uber ride to the airport, as Chris called family and friends to give them the terrible news, the driver reached into his glove compartment and pulled out a Bible.

Some days, Chris says, he does just fine. Other days it’s hard to get out of bed. His best therapy is to try to help reduce what he calls “the stigma of suicide.” Working with Dr.

Nyaka NiiLampti, the NFL’s vice president of wellness, he made himself available in a presentation to Miami-Dade County youth the week before the Super Bowl. Afterward, two youth coaches and nearly a dozen kids came forward, seeking help.

Solomon didn’t even know how to ask after Ella died, at least not at first. Only a couple of months earlier, the family had been celebrating his rookie season. He’d been the third pick of the draft out of Stanford after astandout high school tenure at Coppell. The fall of ’17, the Thomases had the time of their lives realizing Solomon’s dream. Looking back, knowing what was to come, Martha calls those days “sacred.”

Someone in the room at Royal Oaks raises his hand and asks Solomon how he coped the first few months after Ella’s death.

He says his life was mostly a blur. He was lost. Angry. Confused.

“I went through a lot of dark times and a lot of dark places,” he says. “It took a while to get out. When I started having those thoughts, that’s when I realized I needed help bad.”

The 49ers’ general manager, John Lynch, sensing the depth of Solomon’s issues, asked if the organization could help him find a therapist. And so his recovery began. Realizing he’d been “bottled up,” he wrote an essay for ESPN and sat for an emotional video. Every morning, he looks in the mirror and tells himself what he’s grateful for. Keeps a journal. Meditates.

Kevin Hall, president of the Grant Halliburton Foundation, which offers access to mental health education and organizations and sponsors the quarterly Dad2Dad Breakfast Series, asks Solomon a hard question: “Do you wear this on your sleeve?”

Not at first, he says. He’d been used to strangers asking him if he was Solomon Thomas, the football player. Now they ask if he’s Ella’s brother. It was hard initially to have those kinds of conversations walking through a mall, in a restaurant, on a sidewalk.

Now he welcomes the opportunities.

“It’s made me stronger with who I am, what I believe and what I’m trying to do in my day-to-day life,” he says. “It’s made me grow. Sometimes I think I’m tired of talking about it. I just miss her and don’t want to be reminded.

“But it’s also made me think of all the amazing things my sister was. It’s something I’ll wear on my sleeve forever.”

Helps when you’re surrounded by people unafraid to contemplate the depth of your loss. In January, on the second anniversary of his sister’s death, Solomon stood up in a meeting room and made an unusual request of the 49ers’ other defensive linemen. Last year, he told them, he wouldn’t have been able to ask such a favor.

But after seeing the benefits he received from seeing a therapist, he challenged his teammates to reach out to anyone who might be struggling with mental health issues.

How did they react? “They all just gave me a hug and told me they loved me,”

“It was really sweet.”

Also part of Solomon’s message to men: Be vulnerable.

Show your emotions. Talk about your feelings, both good and bad. He thinks it would be Ella’s message, too.

Speaking to the breakfast group in general and yours truly, in particular, Solomon is probably preaching to the choir.

After the event, while offering my condolences, I suddenly found myself unable to finish the sentiment. Solomon waited for me to compose myself, then patiently answered the most sensitive questions. After I thanked him for his time, this is what he said: “Thank you so much. Appreciate you letting your emotions out with me. Crying with me.”

Believe me, Solomon, it’s the least all of us can do.