Making history cool, comfortable
The Revolution, Boston’s newest boutique hotel, will offer a modern take on the city’s past 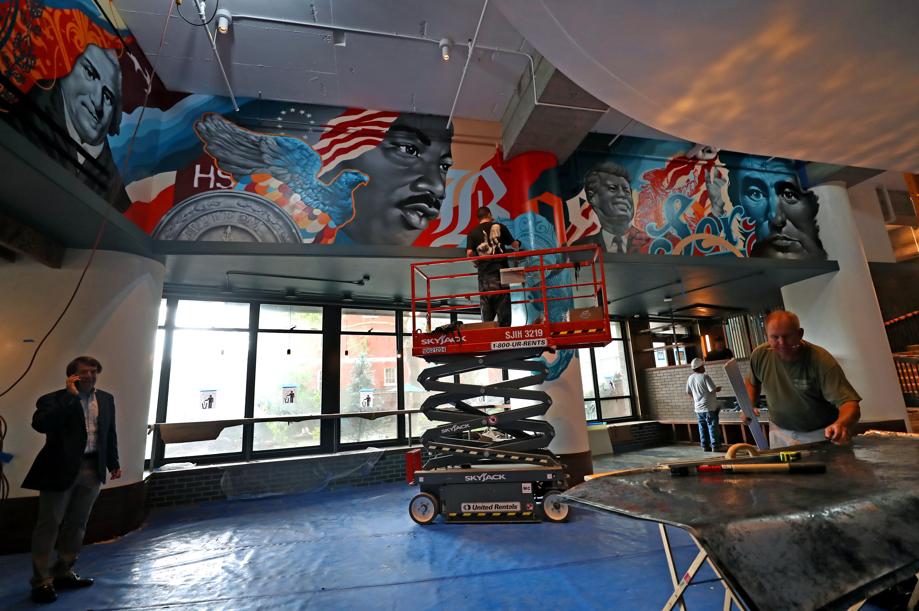 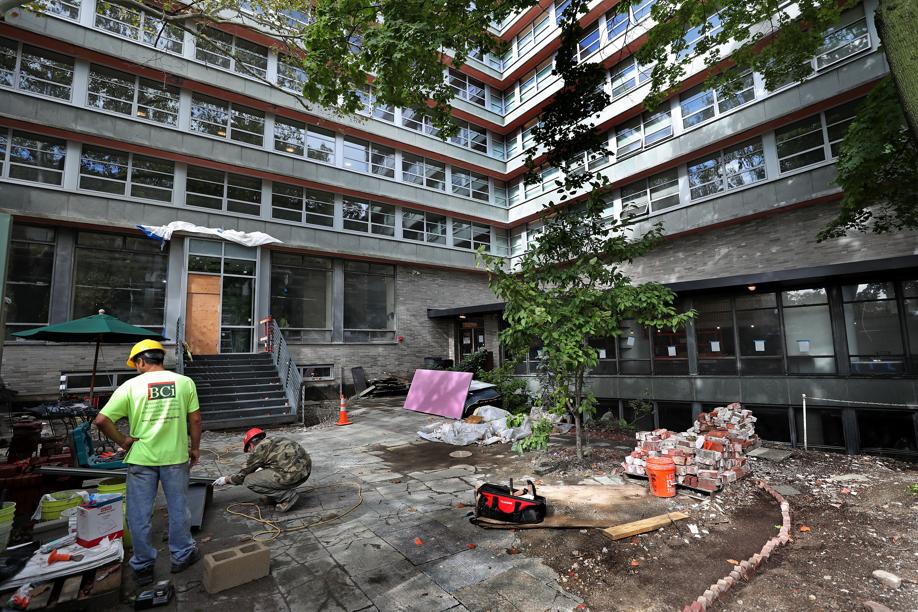 From top: Work is ongoing in the lobby of the Revolution, a former YWCA in the South End; the outdoor space will feature a courtyard and restaurant; a sculpture in the lobby continues the theme of Boston as a place with a long history of innovation; bathrooms in the basement play off of the colors on the MBTA’s subway lines. 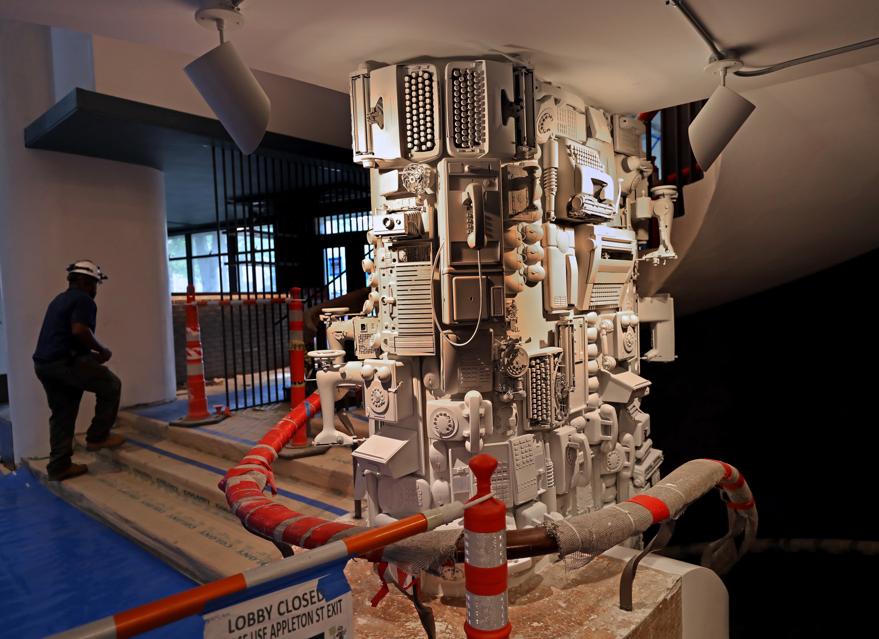 The building had long functioned as a hostel; its views include the Back Bay skyline. In the basement, a new bar will have notations about the city’s history (left) cut into the wood. 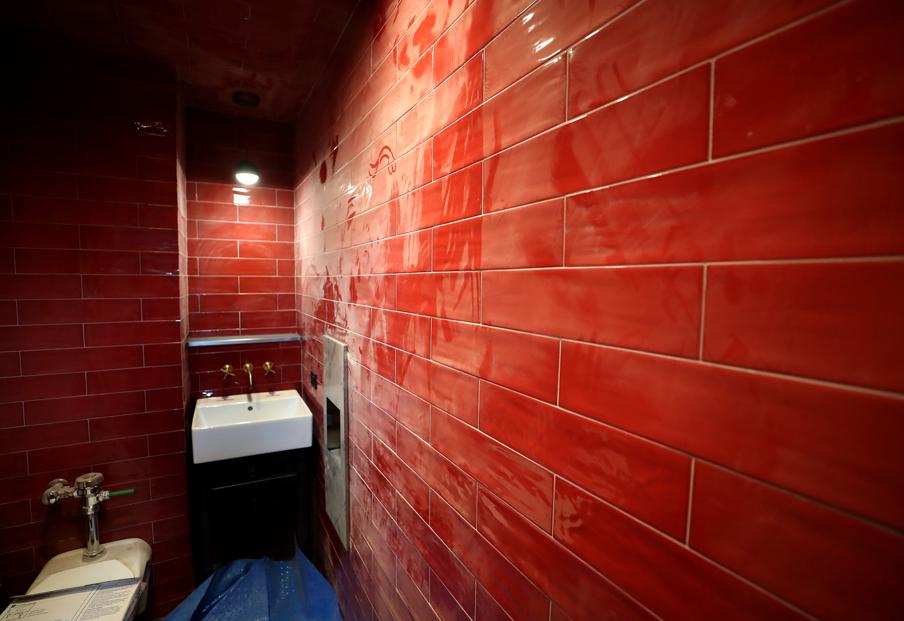 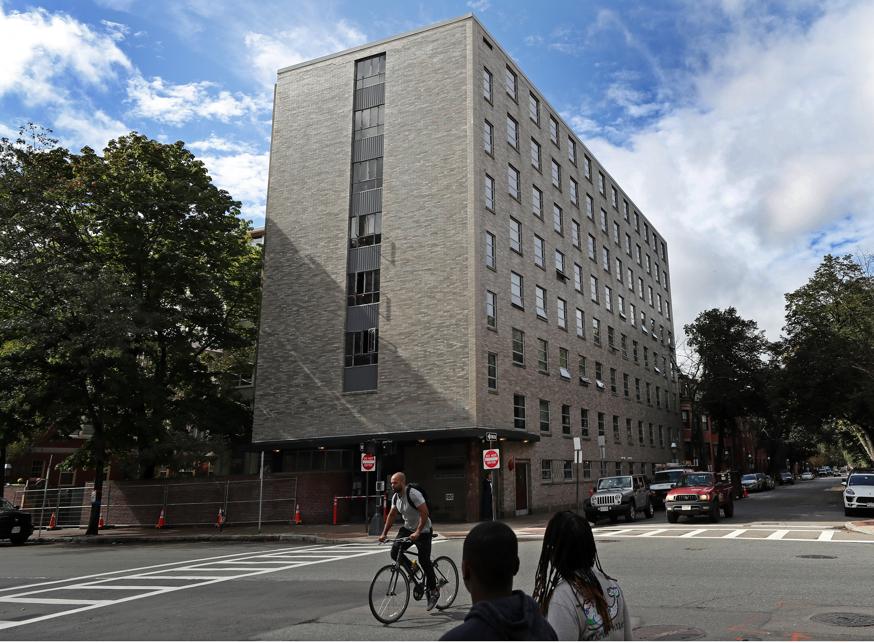 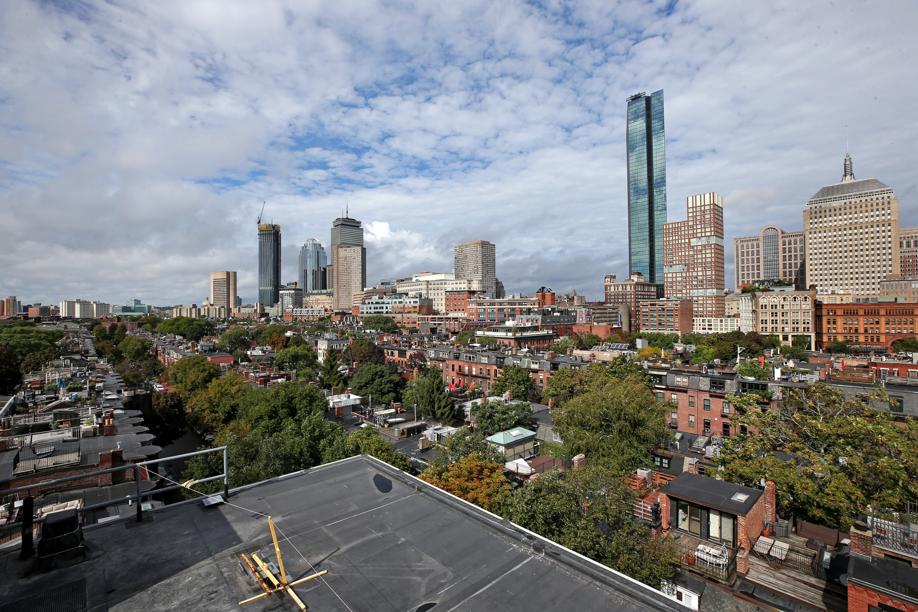 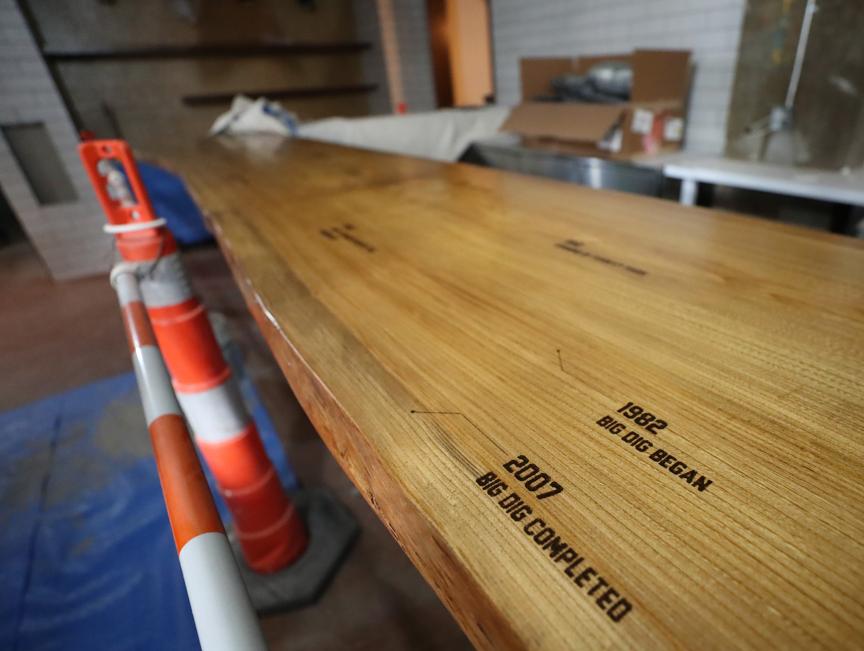 Walk into the almost-finished hotel at 40 Berkeley St. in the South End, and the first thing you’ll see is Martin Luther King. Then Clara Barton, John F. Kennedy, and Malcolm X. These once-Bostonians are staring down on the lobby, their images part of a bright street-art-style mural on the upper walls, mixed in with a rippling American flag, the seal of the City of Boston, and an eagle.

Straight ahead, back by the stairs, a column is being transformed into a sort of totem pole, festooned with telephones, sewing machines, computer mice, and other things that were invented in Massachusetts.

Even the bathroom wallpaper evokes Boston made-heres and firsts, its pattern an image of ether, Chuck Taylor sneakers, and a silhouetted woman (to signify America’s first brothel).

All of it — and many more images layered throughout the 164-room hotel — is being carefully designed with one goal: to make Boston’s history of innovation, well, cool.

That’s the idea behind the Revolution, a former YWCA being remade as a hip, artsy, boutique hotel. Planned and developed by the Mount Vernon Co., it’s scheduled to open in December. It’s a bid to stand out in an increasingly crowded hotel market in the city — full of properties that aim to be “Instagrammable’’ — by being truly and almost overwhelmingly unique.

“This is one of one,’’ said Mount Vernon’s chairman, Bruce Percelay. “There will not be anything else like it.’’

But a hotel dedicated to showcasing history and innovation sounds like it could be a tough sell. So in designing it over the last couple of years, Mount Vernon and its architects at Cambridge-based Prellwitz Chilinski Associates tried to make it come alive, with countless local details.

They designed room numbers in the familiar typeface of the Red Sox. They lined bathroom walls with tiles that evoke the MBTA’s Red, Green, Orange and Blue lines. They fashioned the long bar in the basement from the trunk of a 130-year-old elm tree that died last year in the Back Bay and branded landmark events from the city’s history — the Molasses Flood of 1919, the 2004 World Series — into the pattern of its rings.

Then there’s the art. The Revolution’s rooms are bedecked with scenes depicted by Boston artists Washington Allston and Fitz Hugh Lane. There’s a pop-art print of Wonder Woman by Harvard professor William Moulton Marston in the basement lounge. Los Angeles-based street artist Tristan Eaton was hired to create the lobby murals, which will also be designed into the carpets.

It’s all a way to communicate the history of the city — and to give guests something to talk about — in a way that’s fun, said Morgan Pierson, executive vice president at Mount Vernon and the project’s director.

The cost of the re-do — which included installing bathrooms in some, though not all, of the rooms (there are common bathrooms, reflecting the building’s longtime use as a hostel) — totaled “in the low teens’’ of millions of dollars, Pierson said, plus the $17.2 million Mount Vernon spent to buy the building in 2014. By refurbishing the building, instead of constructing a new one, Mount Vernon aims to keep the nightly rate low — $150 on average — and to attract young, hip visitors who might balk at pricier downtown hotels.

And by packing so much information, stylishly, into the Revolution, it hopes those visitors will come back for more.

“There’s a lot of discovery here,’’ Pierson said. “The casual observer will miss things the first time. Then they’ll find new things. We hope that’s part of the experience, as well.’’