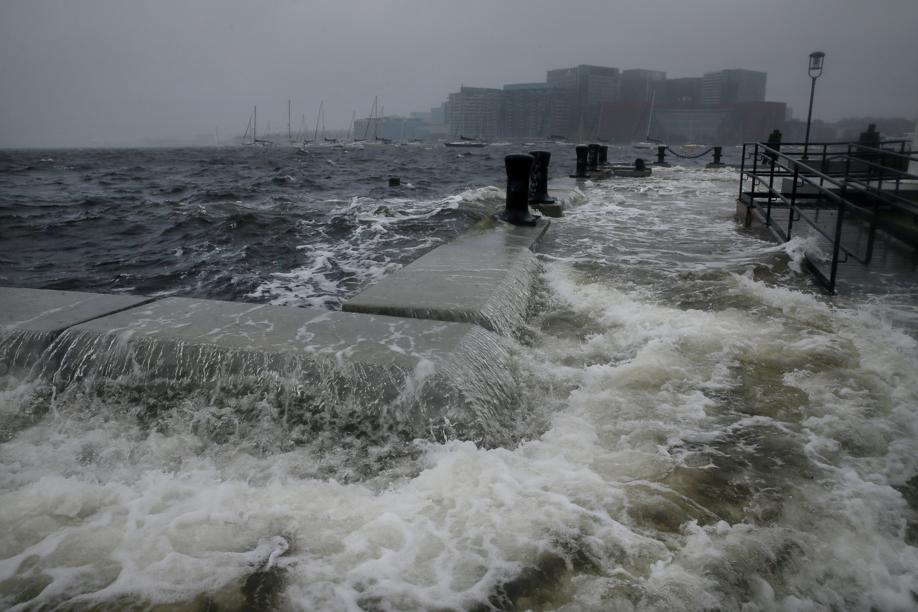 With some of the nation’s highest tides ever recorded, Boston has had more sunny-day flooding than nearly any other coastal community in the country — and the worst is yet to come as sea levels rise, according to a report released Tuesday by the National­ Oceanic and Atmospheric Administration.

The report said coastal communities across the country have continued to set records for flooding during high tides, which have damaged homes, destroyed roads, and imperiled drinking water and sewer systems. The report includes flooding data from as far back as 1950.

With seas rising about an inch every eight years, on average, and that rise accelerating as climate change warms oceans and melts glaciers, the number of days coastal places are likely to experience flooding is projected to increase sharply in coming years, according to the report.

“America’s coastal communities and their economies are suffering from the effects of high-tide flooding, and it’s only going to increase in the future,’’ said Nicole LeBoeuf, acting director of NOAA’s National Ocean Service.

In Boston, the record for such flooding was set in 2017, when high tides inundated parts of the city on 22 days, more than any other community on the East Coast. Only portions of Texas and the Northwest have had more days of flooding, most of which occurred in recent years.

NOAA defines high-tide flooding, also known as sunny-day flooding, as water rising about 2 feet above the typical daily high tide. As sea levels rise, damaging floods that used to occur only during storms now happen more regularly, such as during a full moon or with a change in winds or currents.

Average sea levels have risen by about a foot over the past century.

In Boston, where memories are still fresh of the ocean spilling into subway stations and carrying dumpsters into the street when the so-called bomb cyclone combined with astronomical high tides in 2018, the projections are alarming.

“Every year, new science points to increasing impacts of climate change in Boston,’’ said David Cash, dean of the John W. McCormack Graduate School of Policy and Global Studies at the University of Massachusetts Boston. “We’ve also seen increased impacts of hotter days, and new research on COVID shows climate and the virus multiplying their impacts. More and more, we see these affecting the most vulnerable.’’

Boston officials said they recognize the threat and are developing specific plans that would protect neighborhoods from up to 40 inches of sea-level rise.

“This new report emphasizes the importance and urgency of this work,’’ said Chis Cook, the city’s chief of environmental issues.

Nationally, 19 communities set or tied records in 2019, when the Southeast experienced a threefold increase in flooding days, compared to 2000. Charleston, S.C., for example, had 13 days of such flooding, compared to two days in 2000.

Along the western Gulf of Mexico, there were more than five times as many days of flooding. In Texas, Eagle Point along Galveston Bay last year experienced 64 days of high-tide flooding — more than anywhere else in the country. In 2000, it experienced no such flooding.

Meanwhile, some places are facing even darker projections than Boston. By 2050, high-tide flooding could occur as many as 270 days a year in Grand Isle, La., according to the report.

“When we look at the frequency of flooding, the underlying trend is accelerating,’’ said William Sweet, an oceanographer at NOAA’s Center for Operational Oceanographic Products and Services. “This is the new normal.’’

While the pumping of groundwater and geological forces have caused land to sink in some coastal communities, climate change is the driving force behind the rising tides, he said. By 2030, coastal communities will experience an average of seven to 15 days of high-tide flooding. By 2050, they will have 25 to 75 days, according to the report, part of a growing body of data that projects more routine flooding in Boston.

In 2016, researchers at the University of Massachusetts Amherst found that the accelerating melting of the ice sheets covering Antarctica would have a disproportionate impact on East Coast cities.

As ice melts on the South Pole, the resulting gravitational pull on the ocean, as well as the gradual sinking of land in the Northeast, means that Boston and other nearby Eastern Seaboard places are likely to experience sea-level rise that is about 25 percent higher than in other parts of the planet, the researchers said.

“This problem isn’t going to go away,’’ he said.

The flooding in Boston over recent years could have been significantly worse, he said, given that the city is at the low end of an 18.6-year tidal cycle. In the mid 2030s, when the tidal cycle will peak, high-tide flooding will be that much greater.

“This combination of ongoing sea-level rise and increasing tidal range in the 2030s will conspire to really increase the number of these nuisance flood events,’’ he said. “How bad it will ultimately be for Boston will depend on our global energy future, and our continuing dependence on fossil fuels that cause global warming.’’

For others who have spent years warning about the dangers of rising seas, the report confirmed their growing fears.

“Boston’s low-lying neighborhoods are becoming more and more vulnerable, and we need to get going with implementation of solution strategies proposed in the city’s neighborhood resilience plans,’’ said Bud Ris, senior adviser to the Boston Green Ribbon Commission.

Jack Clarke, who recently retired as director of public policy at Mass Audubon, added that “The message is clear: Boston is going underwater.’’

The report, he said, “should be an alarming wake-up call to City Hall planners and Beacon Hill lawmakers.’’