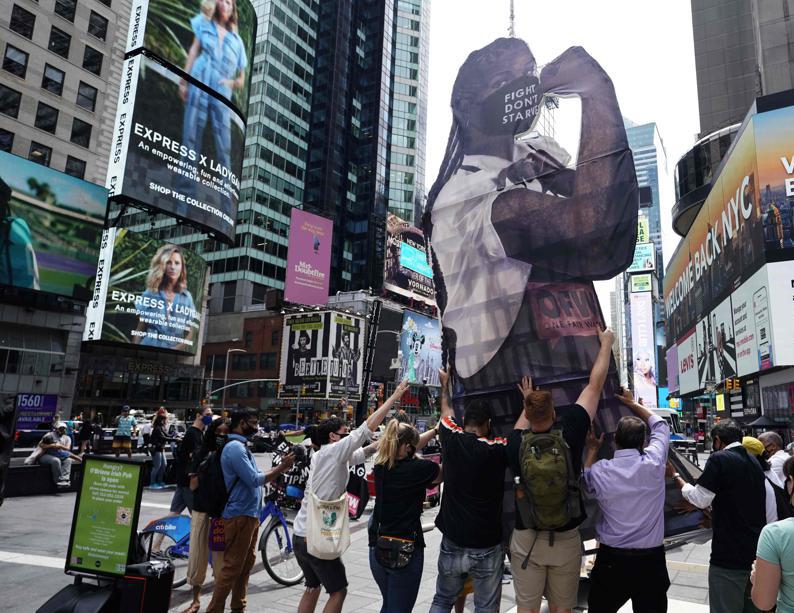 Workers carried an “Elena the Essential Worker’’ statue during a Times Square rally calling for a fair wage.

NEXT IMAGE
By Shirley Leung and Larry Edelman, Globe Staff

Far from a leveler, the coronavirus pandemic has exacerbated America’s already grotesque wealth gap. The rich have gotten richer — much richer in some cases. The poor are being squeezed from all sides. And so a longstanding question has taken on new urgency: How long can our divided economy stand?

Half a year into the sharpest downturn on record, white-collar jobs have essentially recovered, while employment for the lowest-wage workers has declined 14 percent since January as thousands of temporary layoffs are being extended or have been made permanent.

The housing market is hot, fueled by city dwellers fleeing to the suburbs. Meanwhile, a tsunami of evictions threatens renters.

Wall Street has climbed to new heights on the shoulders of tech giants such as Amazon and Google whose businesses have benefited from the COVID-19 crisis — gains that go overwhelmingly to the top 10 percent of households. Yet broad swaths of the lower-wage service economy continue to struggle: restaurants and shops, airlines, hotels, gyms, movie theaters — any business that relies on customers mingling in close proximity.

But many of the companies that have avoided the worst of the pandemic’s economic pain may prove vulnerable unless the government comes through with another significant rescue package, economists say. That’s because consumption accounts for 70 percent of the US economy, and either by government restriction or by choice, the novel coronavirus has altered consumer behavior. People aren’t eating out or traveling as much and are unlikely to do so until there is a vaccine.

“In the long term, if we don’t get people back employed and back consuming, everyone is going to feel it,’’ said Dania Francis, an economics professor at the University of Massachusetts Boston.

The country has so far avoided another Great Depression because Washington has poured trillions of dollars into the economy: generous stimulus checks, a $600 boost in unemployment benefits, billions in loans to small businesses, subsidies for hospitals and airlines, lower interest rates, and financial market stabilizers provided by the Federal Reserve.

But the stimulus checks have been spent or stashed in the bank, the extra jobless money expired at the end of July, and Democrats and Republicans can’t agree on the next round of help. Analysts warn the economy could fall into a downward spiral when low-income households stop spending and high-income households continue to save at high rates because the pandemic is keeping them home.

According to the Bureau of Economic Analysis, personal consumption expenditures tumbled 12.9 percent in April as people lost their jobs when the country shut down to contain the virus; but as government aid arrived, consumers began to spend again, helping consumption rebound strongly.

The bureau’s latest report indicates spending is again slowing to a trickle. Consumption expenditures in July rose only 1.9 percent, while the personal savings rate remained high at 17.8 percent. Pre-pandemic, the savings rate hovered around 8 percent.

“Most upper-middle-class [professionals] don’t think about how their livelihood is affected by consumption decisions of low-wage workers,’’ said Arindrajit Dube, an economics professor at the University of Massachusetts Amherst. “It’s largely invisible to us, and it’s quite real.’’

If consumption continues to drop, more retailers and restaurants will need to lay off workers and close locations. The economic pain is unlikely to stop there, and a constellation of companies that support those sectors could also buckle.

Theresa Tsoi, owner of New Tech Information Systems, a Braintree company that provides computer and merchant services for restaurants and the hospitality industry, said her own revenue is off 50 percent. And that’s an improvement from the 80 percent decline during the depth of the shutdown.

She doesn’t expect business to return to normal until the middle of next year at the earliest, and has reduced hours for some of her five employees.

At the other end of the economy, the pandemic has spawned a gold rush. Thanks to the stock market, American billionaires have seen their combined wealth surge nearly 33 percent, or $970 billion, since mid-March, according to the Institute for Policy Studies. Amazon founder Jeff Bezos’ fortune has grown about 83 percent, to $206.4 billion, over the past five months, while Tesla cofounder Elon Musk’s wealth has tripled to $93.3 billion.

Even after the market’s sell-off on Thursday and Friday, the billionaires are way ahead. Meanwhile, the job market’s recovery over the past four months has been uneven.

Employment for those making less than $27,000 a year was down 14 percent in mid-July from January, according to data tracked by Opportunity Insights, a research organization at Harvard University. For those with incomes above $60,000 — including many with the flexibility to work remotely — employment is off just 1 percent.

The Labor Department reported Friday the US unemployment rate fell to 8.4 percent last month from 10.2 percent in July. The data, based on a household survey taken in mid-August, showed the jobless rate for Black respondents was 13 percent, compared with 7.3 percent for white respondents. Unemployment was 10.5 percent among Hispanic workers and 10.7 percent for Asian workers.

A stark contrast is also evident in the Massachusetts housing market, where those with financial wherewithal are locked in bidding wars in the suburbs while those who have lost their jobs are applying for rental assistance in record numbers. A seller’s market, the median price of a single-family home in the state surged 8.4 percent to $475,000 in July, according to the Massachusetts Association of Realtors.

When the pandemic spooked home buyers and sellers in the spring, real estate firm Jack Conway & Co. planned for a challenging year and anticipated overall sales volume could be off by as much as 25 percent, said chief executive Carol Conway Bulman.

But the market has sprung back to life, buoyed by ultra-low interest rates and the exodus from the city as people working remotely seek suburban houses with backyards. Bulman said that, with inventory low, average sales prices were up about 20 percent in July. Bidding wars are common, she added; one home in Scituate had 54 showings, eight offers, and sold for $47,000 over the asking price.

“Honestly there is no better time to sell your house,’’ said Bulman.

Jack Conway clients Nik and Lindsay Bryan recently put in an offer on a four-bedroom house in Scituate and expect to close in September. The couple, who have been renting a two-bedroom condo in Brighton, started house hunting in January, with their first baby due in May.

The couple feel their jobs are secure, said Nik Bryan, 34, who works in sales for a cybersecurity company. Lindsay, 35, is a public school teacher.

But after the move, they plan to hunker down and watch their expenses.

“We live in a great unknown right now,’’ said Bryan.

How long the divided economy can stand will depend on the country’s ability to contain COVID infections, which in turn will drive the pace of hiring. Progress will be slow, especially in Massachusetts, which has the highest unemployment rate in the country at 16.1 percent in July.

Positive test rates in the Commonwealth are now among the lowest in the country, but some workers who had been put on temporary furlough recently learned it’s unlikely they will ever be called back, including 1,000 at MGM Springfield and 385 at Encore Boston. Delaware North, which operates TD Garden and other venues, extended furloughs for almost 2,800 workers, and UMass Amherst said 850 workers would be temporarily out of work, though some permanent cuts were likely.

The outlook isn’t all bleak. One of the biggest hallmarks of this downturn is the creation of unexpected winners and losers.

Beth Blaney, whose Derry, N.H., firm provides bookkeeping and administrative services to small businesses, braced for hard times after the pandemic hit, but is enjoying a banner year.

“It started with PPP,’’ Blaney said, referring to the forgivable loans made under the government’s Paycheck Protection Program. “People realized they needed to get their stuff together in order to apply. Or COVID scared them into getting their books in order.’’

Blaney said the new clients have signed on for continued services, doubling her business since the start of the year. She recently hired two people, bringing her staff to six.

“Other bookkeepers and accounts I know are going through the exact same thing,’’ she said. “We are turning away clients we don’t want.’’