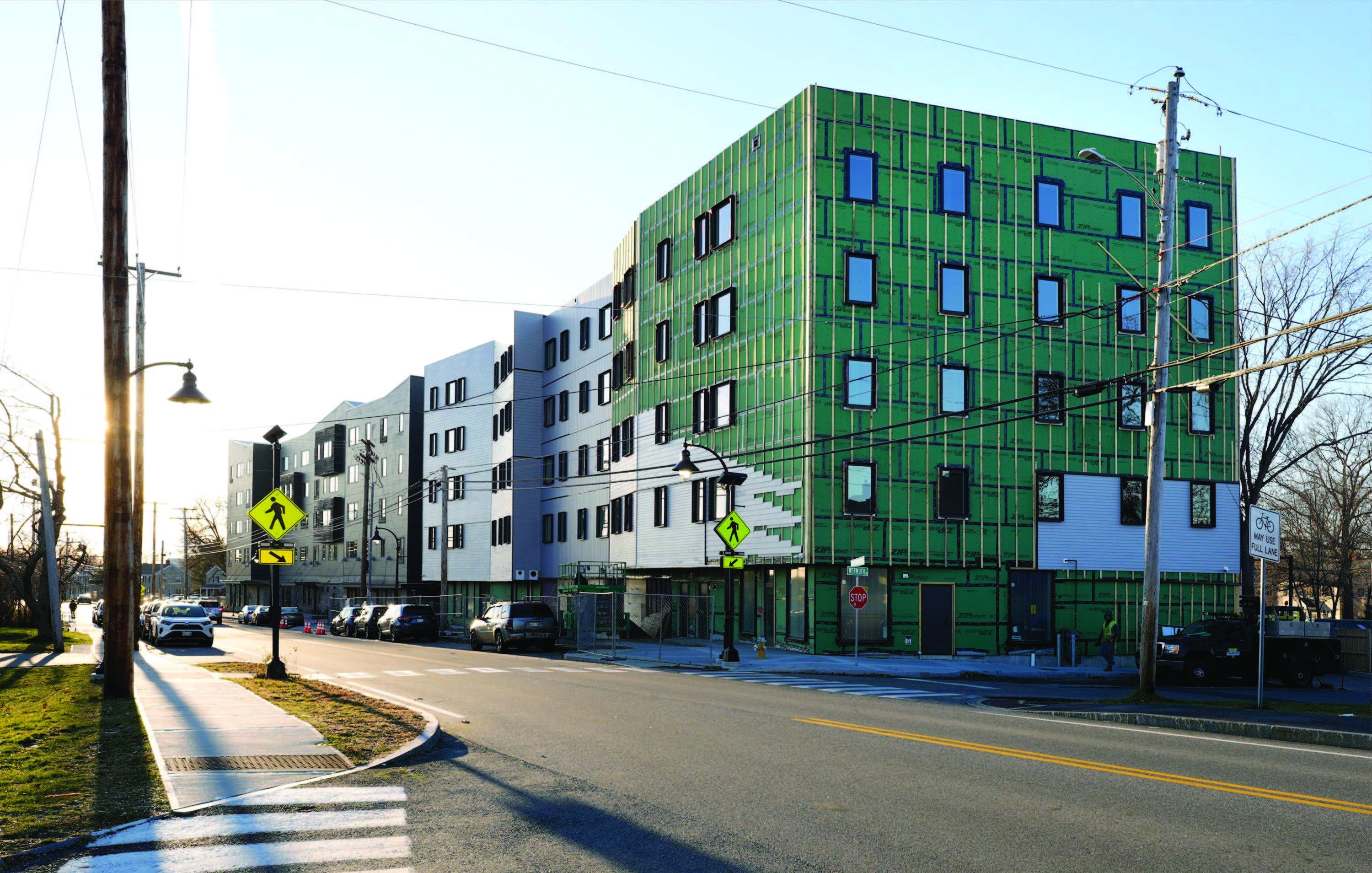 The West End II apartment complex on Westbrook Street in South Portland will have 52 units for asylum seekers and offer on-site support services like language classes and career counseling through Avesta Housing.

NEXT IMAGE
New projects may soon begin to ease housing burden for asylum seekers
Up to 175 units may be available in three communities by spring, which will allow the new Mainers to secure their immigration status and work authorization.
By RACHEL OHM Staff Writer

Projects in Portland, South Portland and Brunswick could add up to 175 units of housing for asylum seekers in Maine starting as soon as this month.

The apartments, which are first-oftheir-kind projects in various stages ofdevelopment, would fill a critical need and could help offset costs for Portland and other communities that have been relying on hotels to house an influx of new Mainers as well as the homeless.

“There’s an overwhelming need,” said Amanda Gilliam, director of property management for Avesta Housing, which expects to soon open 52 units at the West End II apartments in South Portland and is proposing 48 units at Winchester Woods in Portland. Both projects would house asylum seekers.

“People who have come here recently often can’t work yet so they’re the most vulnerable among us,” Gilliam said.

“There’s just such a need to house them that we wanted to be part of whatever solution is put in place to help them.”

Portland-based Developers Collaborative is also working on two projects at Brunswick Landing in Brunswick that together would have 60 units for asylum seekers. Construction on those projects has started and they should be move-in ready in May or June, said Kevin Bunker, the real estate developer’s founder.

“There’s a need and no one else was doing it,” Bunker said. He said he received a call earlier this year from Greater Portland Family Promise, which has been working to place asylum seekers in housing, asking if he could help meet the need. “I said, ‘I don’t know. Let’s try,’” Bunker said.

The state has agreed to support rent payments for two years at the four projects using part of $22 million allocated by the Legislature for housing needs in the state budget. The support should help families secure their immigration status and work authorizations, said Greg Payne, a senior advisor on housing policy in the Governor’s Office of Policy Innovation and the Future, in an email.

In addition, the state has also agreed to provide rental assistance for up to 15 households of asylum seekers experiencing homelessness at a third Avesta property, Porter Station, that is expected to open this spring in Portland. The 48 units at that property would be available to anyone who qualifies by income level, however, and not dedicated solely to asylum seekers.

The Greater Portland Council of Governments, a coalition of towns and cities in the Portland area, has estimated that housing a family in a hotel room can cost up to $7,000 per month.

In Portland alone, the city spent more than $60 million between July 2019 and June 2022 housing asylum seekers – about 76 percent of its social services expenditures during that timeframe.

The cost to the city has been offset, however, by state and federal reimbursements.

The new arrivals, hailing from African countries including Congo, Democratic Republic of the Congo and Angola, combined with high numbers of homeless Mainers have overwhelmed city shelters. As of Nov. 30, the city was sheltering 889 people per night, including 91 families and 554 individuals, including single asylum seekers. That doesn’t include another 317 people being housed in a hotel in Saco that is being managed by Catholic Charities.

The city has the opportunity to help fund some of the proposals for longer-term asylum seeker housing, including with the Winchester Woods project and a separate proposal from GPCOG and its partners, including Developers Collaborative, to build 200 units of transitional housing for asylum seekers in Portland.

Both projects were submitted as proposals to the city through its American Rescue Plan Act funding process and could be funded using money in the Jill C. Duson Housing Trust Fund, a municipal fund the city can use to help finance affordable housing developments.

The fund contains about $8.7 million, though the city currently has almost $14 million worth of requests received through its Affordable Housing Development application process and the ARPA process.

“The city will be evaluating all proposals and looking at funding options that will bring housing units onto the market as quickly as possible,” said city spokesperson Jessica Grondin in an email.

Winchester Woods is still in the planning process and Gilliam said it’s too early to say when that project could open. According to Avesta’s ARPA application, they are proposing buying a 48-unit complex already under construction in East Deering using a mix of ARPA funding and a Maine- Housing loan. Portland has yet to consider the request from Avesta for $5 million, though South Portland last month rejected a request for $500,000 in ARPA funds.

South Portland councilors who voted against the request cited a wide range of reasons including a lack of funding from other municipalities, that there are no guarantees South Portland-based asylum-seekers would be housed there, and that the city’s ARPA funds should go toward efforts that directly impact South Portland families.

“There’s numerous pieces we’re working on trying to come together. We’re hopeful we can make it happen,”

At both West End II and Winchester Woods, Gilliam said Avesta plans to provide services that cater to the unique needs of asylum seekers, including legal support, language classes, transportation and career counseling.

“Residents at both West End II and Winchester Woods will require a multitude of support services to ensure health and stable housing, so we’ll definitely be working with a number of partners,” Gilliam said.

Developers Collaborative plans to work with Greater Portland Family Promise to provide on-site services at the Brunswick apartments, which haven’t yet been named.

Michelle Lamm, executive director of Greater Portland Family Promise, said that will include English classes, help with food and transportation and help with understanding and acclimating to life in American apartments.

“Basically we will act as a liaison between the property management company and the families and try to be an advocate for the families,” Lamm said.