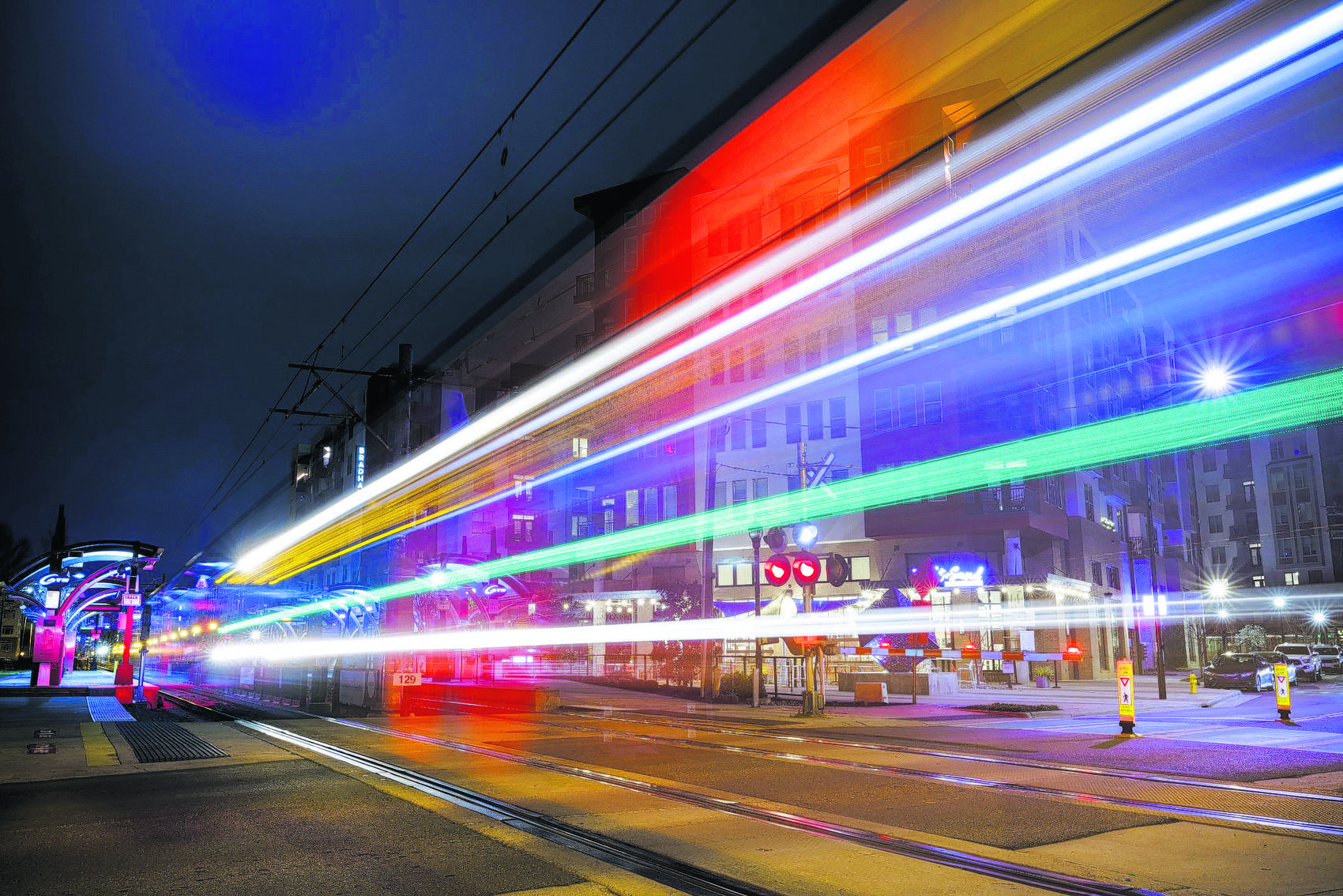 A light rail train passes over the crossing along New Bern Street near high end apartments and shops in Charlotte on Saturday.

If all goes to plan in 20 years, Charlotte will have its next big transit addition: light rail running east to west. But urban transportation solutions often come with a problem: A spike in land value.

The latest proposed route for the Silver Line in Charlotte shows future stops in neighborhoods that right now are some the most likely places to find affordable places to live. But the new transit project threatens that, with large-scale commercial and residential developments often trailing public investments, like light rail.

In turn, land values rise and the equation to build affordable housing becomes even more complicated. It’s already happened in Charlotte, with the Blue Line leading to gentrification in many neighborhoods.

Now some on City Council are asking if Charlotte should take a more active role in acquiring and holding land for future affordable development.

Land banks are a rarity in North Carolina but common in other states. They are created by local governments to buy or otherwise obtain property for a community benefit, including reducing blight, or to preserve affordable housing through land and property acquisition.

In Charlotte, the concept of land banking has been floated as a potential solution, most often in connection with future transit expansion. One area of concern is along the proposed Silver Line route that will stretch from Belmont, through west Charlotte, uptown, and east to Matthews and Indian Trail.

The planned route includes quickly-changing neighborhoods vulnerable to gentrification in east and west Charlotte near U.S. 74, which have long been home to Black, Hispanic and immigrant communities.

While the line would provide additional public transit access, many worry it will spur luxury development as it did when the Blue Line opened. Officials with the city and Charlotte Area Transit System have previously acknowledged missed opportunities to ensure some of the Blue Line-adjacent development would be affordable, rather than the majority luxury housing in areas like South End.

What is a land bank?

By acquiring properties that have fallen into disrepair, foreclosure or have a tax lien, land banks take control of vacant land and convert it into productive use.

Sixteen states have passed laws to enable land banks, according to the Center for Community Progress. North Carolina is not among them. The center tracks more than 200 that have been created across the country.

In stronger housing markets like Charlotte, where the predominant issue is affordability and availability of land rather than blight, land banks can purchase property and hold it for future use when prices are expected to continue climbing.

“In places that are really growing and expanding population, there are always questions about gentrification. A really important question is, who gets to move in?” said Sophie House, director of law and policy at New York University’s Housing Solutions Lab.

“Land banks can be one tool to preserve economic diversity (and) create more opportunities for lower income people to move into neighborhoods, even in a situation where housing costs are expanding,” she said.

Land banks typically are funded by local governments, as well as revenue when developers acquire land or property out of the program.

The town of Chapel Hill began a land bank with a $3 million revolving loan from UNC-Chapel Hill to buy properties and stabilize the historically Black and rapidly gentrifying neighborhood of Northside.

Longtime residents of the historically Black neighborhood struggled to afford to stay, due to a combination of rising housing prices and more students from the university moving nearby. So in 2015, the town created a land bank, in partnership with a local nonprofit, to buy properties in the neighborhood and resell them to families at an affordable price.

“When sales happen, they happen very quickly,” said Sarah Viñas, director of affordable housing and community connections for the town.

In Northside, she said, “they were often being sold to investor owners who were converting them to student rentals and sometimes tearing down old homes and building a much larger home.”

Viñas said the land bank, which works with a local nonprofit, has acquired more than 40 properties in the area. It’s been a stabilizing factor in the neighborhood, she said, and a way to strengthen existing community ties.

Angel Rodriguez, who leads the Philadelphia Land Bank, said local governments thinking about starting a land bank should give serious thought to their priorities and strategy.

Should it focus on acquiring smaller, single family homes to promote affordable homeownership, target larger multi-family rentals, or a mixture? Is the bigger concern blight and securing underdeveloped space, or preserving quickly-disappearing land for future use?

Land banks have a similar mission but are different than land trusts, which acquire or build homes to sell at affordable prices but retain control of the land beneath it to ensure the property stays affordable.

The land bank organizations that spoke with the Observer all say they do not retain ownership of properties after a use has been identified, but rather sell or transfer ownership to mission-oriented developers committed to creating affordable housing or other community benefits.

The work of the Metro Atlanta Land Bank has evolved several times over in its 30-year history, said Executive Director Christopher Norman.

Its early years focused on clearing titles and eliminating delinquent taxes that could inhibit redevelopment, he said. Then, the land bank shifted to acquiring single family homes that had fallen into foreclosure during the 2008 housing crisis and recession. Now, he said, it’s a fight to preserve affordability, by acquiring property to hold it for future development.

Land banks, Norman said, can act as a “patient landlord” to take property off the market until the right developer is identified to create a community-minded project. To date, it’s created 725 affordable housing units.

Land prices are a critical issue for affordable housing in Charlotte, especially in high opportunity areas close to jobs, transportation and other amenities. Developers and local government officials have voiced concern that rising costs will make deals more difficult to execute.

It comes at a time when the city still lacks thousands of units for low-income residents, despite enormous public investments, including nearly $219 million in Housing Trust Fund spending over two decades.

Increasingly, affordable housing developers and city leaders have pursued land donations as a way to bring down costs.

Such donations have been a critical component to several recent affordable developments in traditionally expensive areas, including low-income apartments underway on the YWCA Central Carolinas’ Park Road campus, and a project in uptown underway next to Little Rock AME Zion Church that included land once owned by the city.

But the city hasn’t yet pursued buying new properties for the purpose of future affordable development. It has been raised as a possibility, albeit with few concrete steps, by some city council members in conversations about Charlotte’s continued development and growth.

“What this is really showing is the city kind of stepping in as a developer of sorts,” Winston, an at-large Democrat, said.

“We should analyze if this is something that can be repeated, how do we acquire ... land when we have the possibility.” He noted the need for “forward thinking” especially around plans to expand transit.

In an interview last month about the future of the Housing Trust Fund, Council member Ed Driggs called the idea of land banking “a little troublesome.”

“We are basically trying to front-run the market, relying on our knowledge of plans that we may have for transit and things like that,” said Driggs, a Republican who represents District 7 in south Charlotte.

“As long as we aren’t acting on information that is not available to everybody, then we could bank the land,” he said. “But, it’s just very expensive.”

But using city money for land purchases for developments years down the line would have to be balanced with funding more immediate housing needs.

Council member Malcolm Graham, a Democrat representing District 2 on the west side, said he would support it.

“The city has to play a greater role moving and purchasing land for affordable housing throughout the city,” he said, specifically near transit and other amenities. “There cannot be a proliferation of affordable housing just on one side of town, and we may have to pay a premium to do that.”

Creating a government-backed land bank locally may be a challenge. North Carolina law limits what cities and counties laws can enact on their own without express permission from the General Assembly.

That has limited other attempts at housing policy changes such as requiring developers to build a certain number of affordable units in every project, as well as rent control. Local efforts to prohibit source of income discrimination, which would bar landlords from outright rejecting applications because they pay with a voucher, have stalled in part because of concerns it would exceed the city’s authority.

It could provoke similar opposition if Charlotte were to pursue the creation of a formal land bank entity, which usually include boards of directors that are supported by local governments but operate separately. The city could also explore using city funds for land purchases without creating a formal land bank.

Cost is another factor. Atlanta and Philadelphia’s land banks get funding from their local government’s general funds, and Philadelphia also allocated a small portion of its $400 million neighborhood preservation bond.

While some land banks have first access to certain properties — Philadelphia’s, for instance, has right of first refusal for homes at public auctions held by the sheriff’s office — they are often competing in the open market.

That can be a challenge, leaders acknowledge, in fast markets.

Norman said land banks in Georgia were unable to convince lawmakers to approve a provision that would give them the first shot at acquiring properties.

In Philadelphia, that right of first refusal only applies to properties sold at sheriff’s sales, Rodriguez said. In other transactions the land bank is competing in the open market.

Viñas said Chapel Hill’s land bank, which has since expanded to another neighborhood vulnerable to gentrification, is looking to further expand, perhaps county-wide, to preserve the scarce available land for affordability, open space and other community benefits.

“We know that it’s essential,” she said.