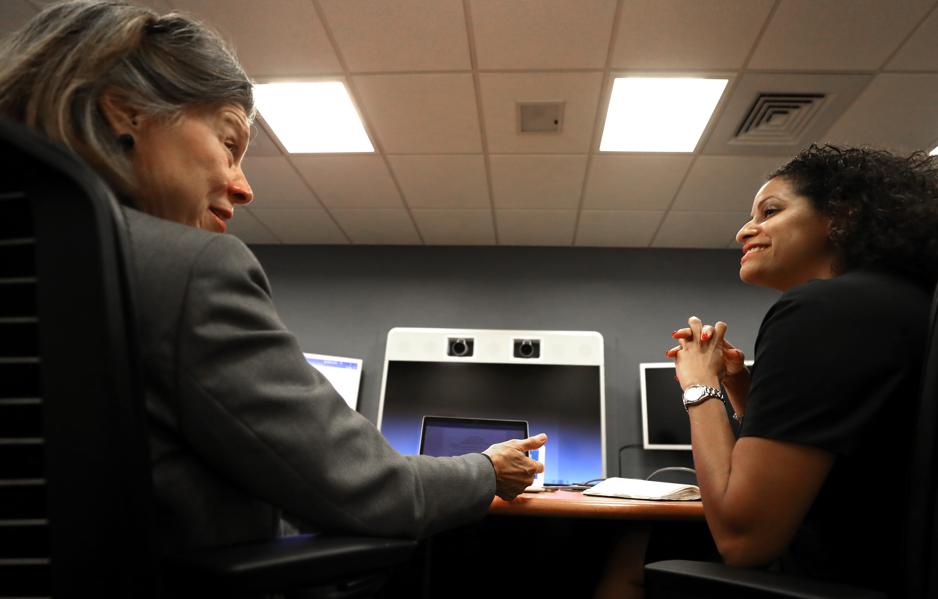 Martha Sloan Felch grew up in comfortable suburbs of Philadelphia and Chicago. She earned an MBA before launching a successful banking career, with tours at Shawmut, Fleet, and smaller Massachusetts banks.

But on a recent weekday, Felch found herself in a borrowed conference room, trying to guide a fledgling nonprofit through a leadership transition. Nurys Camargo, a woman of Dominican-Colombian descent who started the Chica Project seven years ago to mentor young Latinas, listened carefully as Felch talked about the need to build a stronger board.

“You need to go slow and have your ducks in order,’’ Felch counseled.

Felch, who dislikes the word retirement, left banking last year to join the growing ranks of older executives who are “paying it forward’’ by coaching nonprofit leaders. For high-octane professionals, mentoring social entrepreneurs — as paid consultants or as volunteers — offers the chance to share skills and insights gained in the corporate world with idealistic up-and-comers who need business savvy to carry out their missions.

The need has grown at a time of budget cuts at some government agencies and foundations that have traditionally funded nonprofits. The financial constraints, along with a tighter labor market, has made it tougher for them to hire staffs and access talent.

Felch and Camargo, who spent the summer working intensively to reposition Chica, are a study in contrasts: Felch, a grandmother and onetime Sunday school teacher, is direct, authoritative, and reserved. Camargo, 43, is a voluble veteran of political campaigns who talks with passion about her motivation for founding the Chica Project: “I didn’t see many women who looked like me’’ in Massachusetts professional circles.

Camargo, who is planning to step down as Chica’s leader, connected with Felch through a Boston-based organization called Empower Success Corps, which is dedicated to helping nonprofits.

“My first reaction was, ‘Who is she and what does she know?’ ’’ Camargo acknowledged. “But now we vibe. Martha understands our culture of having conversations and having fun at the same time. We’re on the same frequency in wanting to create an organization that’s sustainable.’’

“It’s been an organic kind of growth,’’ Felch said of their engagement.

The mentoring movement dates back at least four decades. A group of prominent captains of commerce, led by banker David Rockefeller Sr., founded the Executive Service Corps in 1977 to strengthen nonprofits. In more recent years, as large numbers of baby boomers began leaving the workforce, dozens of other groups have sprung up, including many professional and business school alumni associations, to work with younger leaders in a range of fields. From coast to coast, thousands of seasoned mentors are seeking to impart wisdom and expertise.

“You’re putting people with experience together with people who can learn from that experience to deliver on their missions,’’ said Doug Dickson, board chairman at Encore Boston Network, a group that helps place older businesspeople and professionals in new roles in the nonprofit sector, public agencies, and mission-driven businesses.

For the mentors and consultants, there’s also a strong desire to contribute. Some of them lost jobs in corporate downsizing moves or felt passed over by younger executives in the latter years of their careers. “It gives them a way to continue creating value in a society that doesn’t have a place for these people,’’ Dickson said.

Others simply decided they were at a time in their lives when they wanted to give back.

Retired lawyer Marie Lefton, 63, mentors young staffers at the Conservation Law Foundation in Boston, which advocates for environmental causes such as clean water and healthy oceans.

“I like the psychic benefits of having my advice sought,’’ she said. “And I feel a legacy obligation to my society, my country, and the planet. The young people have the vision and enthusiasm to get us where we’re going. My job is to help them be 10 percent more efficient.’’

Mentors have varying financial arrangements with the nonprofits they serve.

Felch and Hungwah Yu, 59, a former assistant dean at Lesley University in Cambridge who is also assisting Chica, are volunteers with Empower Success Corps, which deploys a network of 170 consultants to help nonprofits across New England develop and refine strategic plans. Empower charges a modest fee for its services.

Camargo said Chica hired Empower partly because the price was more affordable than standard consulting rates. In the process, the founder of a group dedicated to mentoring young women found a mentor herself.

Their easy banter helped lighten the mood at a recent “wrap-up’’ session in Boston’s Financial District at which they plotted the next steps for the Chica Project, as Camargo prepared to hand over daily management of the organization to Chica’s interim executive director, Erika Rodriguez, 26. Felch, Yu, Camargo, and Rodriguez huddled around a conference table at an AT&T office where Camargo works as a regional director of external affairs.

Camargo, who will continue to serve as the board chairwoman, said her decision to step back from running Chica fits her philosophy of preparing others to lead.

The agenda included crafting a succession plan, expanding Chica’s mission, and devising plans for the organization to handle its own finances, which have so far been overseen by another nonprofit, City School in Dorchester.

Felch reviewed an “action plan’’ with “deliverables’’ spelled out in slides projected on a screen.

When Camargo launched the Chica Project in 2011, the goal was to close the opportunity gap for young Latinas and propel them into the professional world. As the group signed on to work with Latina girls in schools in Boston, Lynn, and Lawrence, however, it discovered that many of the schools’ students were black or Asian. Chica’s new strategic plan, crafted with Felch and Yu’s help, will seek to formalize the group’s decision to work with a broader group of young women.

“It’s an issue whenever there’s a turn in the road,’’ Felch told Camargo. “You have to be sure to think about whether this is still you or whether you’re stretching yourself too far.’’

Julie Crockford, executive director of Empower Success Corps, said Felch “eats up opportunities to network, to learn, and to share.’’

Felch was matched with the Chica Project because she values the work of helping organizations become better at what they do, said Ulea Grace Lago, Empower’s director of consulting.

“And she sees mentoring as a two-way street,’’ Lago said. “She thinks about what she can learn as well as what she can give.’’

Robert Weisman can be reached at robert.weisman@globe.com.