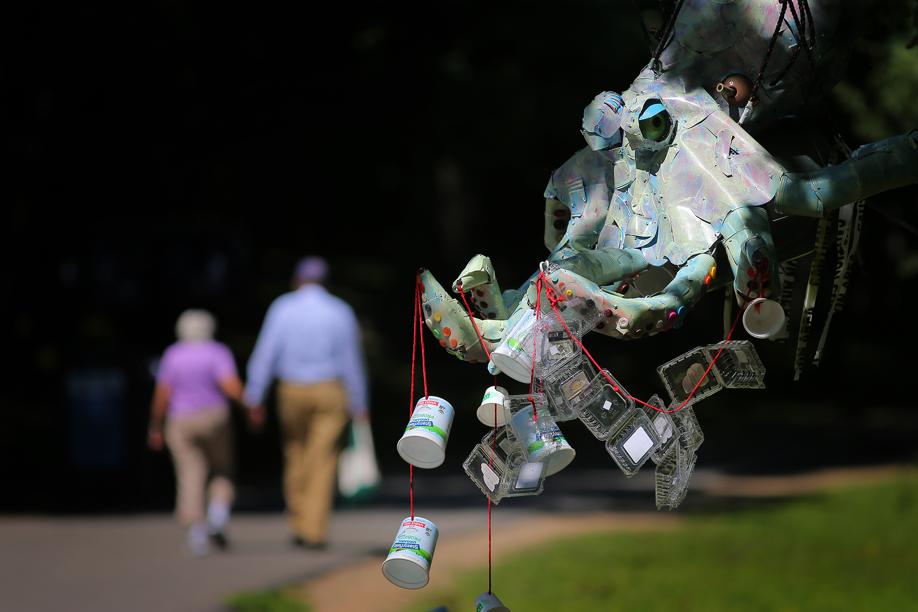 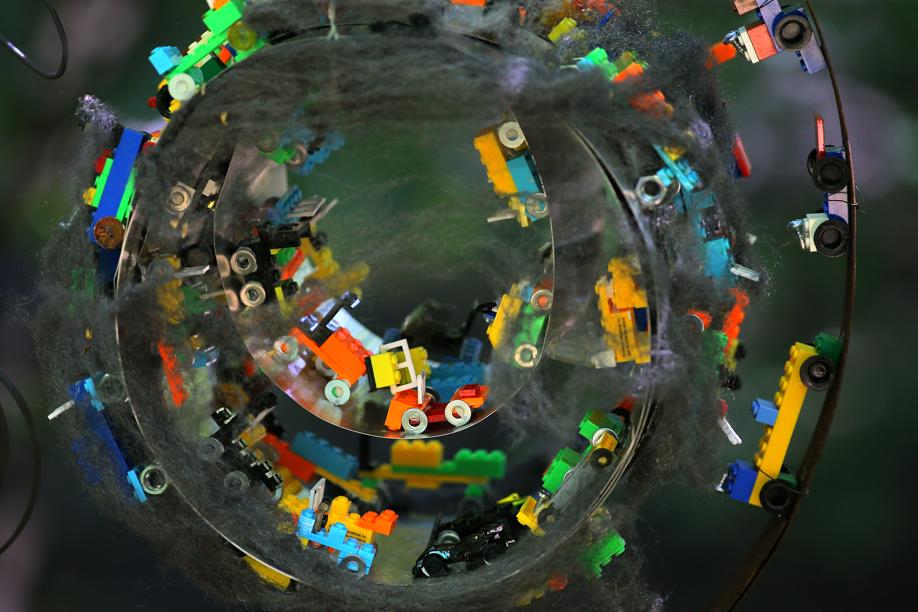 Top: Details of “Hanging in the Balance’’ by Gail Jerauld Bos (left) and “The Endangered Six’’ by Delanie Wise. Middle: Detail of Marnie Sinclair’s “Stellar Legs.’’ Above: Detail of “Alien Fishery’’ by Julie Lupien Nussbaum. 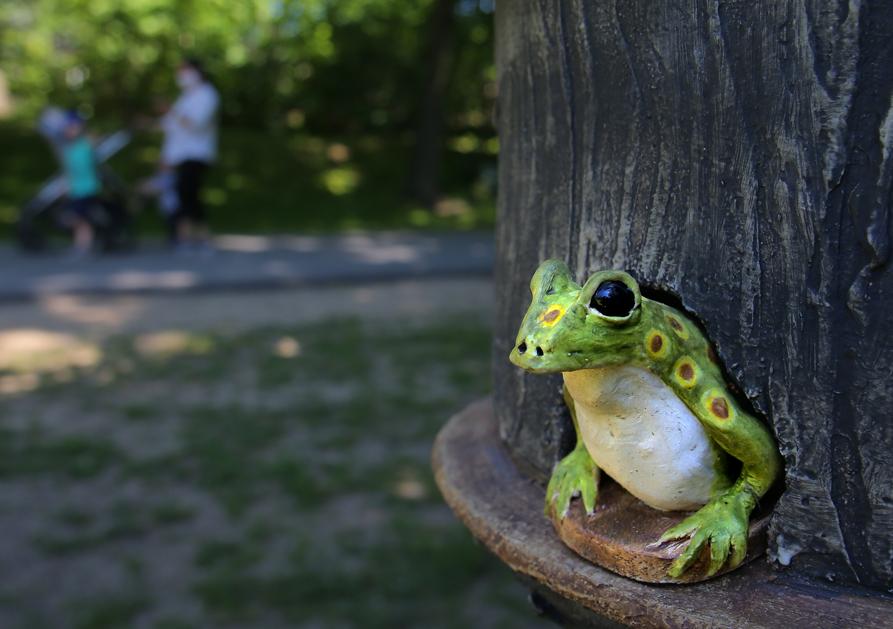 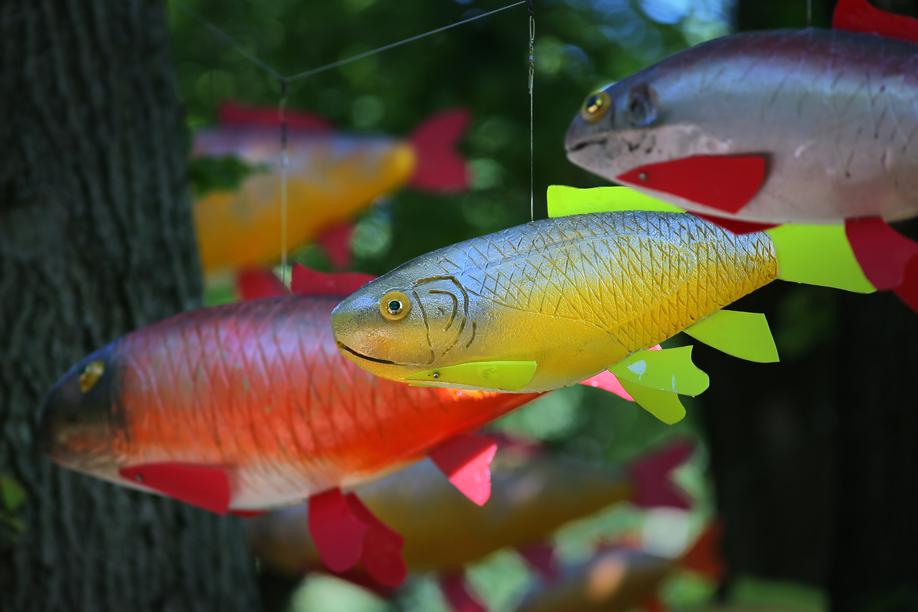 Aplastic green-eyed octopus dangles from the limbs of an oak tree. Two tall mastodons of alder and sumac branches guard the river bank. Ghostlike animal silhouettes dot the lush greenery, and a shepherd of scrap steel points toward a nearby footbridge, his staff topped by a question mark.

For the 21st year, the Brookline-based arts collective Studios Without Walls is transforming pathways along the Muddy River into a free outdoor sculpture gallery from June 19-Sept. 7. Hosted by Brookline Parks and Open Spaces, the installation enlivens Riverway Park across from the Longwood T stop with family-friendly works by 13 professional artists, many of whom have exhibited internationally. The site-responsive exhibition offers signs with QR codes and maps that can facilitate both a self-guided tour and game of treasure hunt. But part of the beauty of the design also lies in its sense of discovering the unexpected. With sculptures tailored to nestle in and around the trees, a leisurely amble offers a surprising visual treat of clever, substantive, thought-provoking art.

This year’s theme is “2020 See Change,’’ which founder Bette Ann Libby says was deliberately conceived to allow a broad interpretation. That whimsical plastic “sea’’ cephalopod, “Stella, the Octopus?’’ It’s the latest addition to Marnie Sinclair’s 12-year art project calling for addressing the imbalance man has wreaked on the natural world. Made largely of unrecyclable plastic and stuffed with detritus, Stella collects trash in the can she is straddling. Delanie Wise’s ceramic creatures showcase six that are endangered in New England, while Julie Lupien Nussbaum’s “Alien Fishery’’ highlights invasive species.

Some works, like Maria Ritz’s “Pi in the Sky’’ and Gail Jerauld Bos’s “Hanging in the Balance,’’ have sociopolitical resonance. Liz Helfer created “Blinkah II’’ from broken windshield glass in response to “the casual destruction of life around us.’’ With “#gogreengoblue,’’ Madeleine Lord invites viewers to take selfies with her scrap steel figure and post action intent on social media.

Janet Kawada’s striking “Rewind, Remember’’ reflects the ephemera of memory, while Allen M. Spivack’s painted steel installation both questions and marvels at “Yet Another Sunrise . . . Tomorrow.’’ Linda Hoffman’s “A Tree Grows in Brookline’’ is an eloquent totem of hope and healing, and Libby’s “Turning Point,’’ repurposing 11 rusty barrel rings into a colorful kinetic sculpture, serves as a metaphor for change. “The number 11 is linked to the Justice card in the tarot, symbolizing balance, decision-making, and fairness,’’ Libby says. “I’m hoping we come out of 2020 in a much better place.’’

Studios Without Walls artists say they relish the process of developing each year’s exhibit, from submitting proposals to sharing ideas and resources to discussing the engineering tasks involved in creating and displaying art that will withstand rain, wind, and sun (there have been roughly 75 artists involved in the show over two decades). While COVID-19 nearly derailed this year’s installation, it was finally given clearance, for which the artists are especially grateful given the isolation of the moment. “I feel like we’ve all become strangers in a strange land, living in a contracted, even fearful way,’’ says Spivack. “A sculpture show like SWW among the trees helps us reclaim our sense of vitality and excitement. Hey, I’m alive! Also, making sculpture is such a solitary activity and so being able to watch people respond to the work, often in unexpected ways, affirms the power of experiencing art up close and personal.’’

Kawada, a Studios Without Walls artist since the beginning, adds, “We have had commuters say they wait for this to come up in the spring. It gives them a lift. People pose with the pieces, they read the signs and sometimes we get a response in the form of guerilla pieces alongside our art.’’

Libby hopes “2020 See Change’’ also will provide respite for workers and families of patients in the busy Longwood medical area. “It really feels like giving a gift to those people in very traumatic situations, giving them a place to get away from it all,’’ she says. “It will be an oasis, a place to slow down, breathe, and just be there and enjoy the art.’’

Brookline’s Parks and Open Space director Erin Gallentine calls Studios Without Walls a natural partnership between art and nature that can help bring back a sense of hope and optimism. “The art provides a moment that changes our perspective,’’ she says. “Especially now, during the pandemic, it may be helpful to take a moment and reflect upon what would have otherwise been taken for granted.’’

Karen Campbell can be reached at karencampbell4@rcn.com.